That's what I always called James Harvey Hylton: Mr. Hylton. When I left Talladega Superspeedway and headed home last April after working the ARCA race, little did I know that I had seen Mr. Hylton for the last time. This silver haired legend of a racer lost his life in a highway crash as his #48 race team was headed by to their South Carolina base after that same race. His son, James, Jr., known to everyone in the ARCA garage as "Tweet", was also killed in the same accident. It was a surreal experience to get home and find out about their accident and the tragic outcome. In the years I've been photographing ARCA races, this was the first time I had lost someone from racing I had worked with so closely. I have mourned the loss of many race car drivers I had admired, but grieving over someone I knew so well was a different matter entirely. And it hurt to know I wouldn't see Mr. Hylton again. God rest his soul and that of his son's.

As part of my year end review of my life and my photography work, I decided I needed to add my own personal tribute to the many others which have been posted since that day in April by sharing these words and some photos I've taken of Mr. Hylton through his years in ARCA. I never saw Mr. Hylton get upset and every time I greeted him, he would smile and say he was doing great and call me "young man", which was nice. He often had an unlit stogie in his mouth or so when didn't have one, it was very unusual and it was hard to get a photo of him without one. You could tell from his demeanor that he was always happy to be at a racetrack. He had been involved in racing for more than 60 years so the racetrack was a second home for him. And we were his second family.

I have always found it especially ironic when a race car driver dies in a highway accident as you know they have all escaped calamity on racetracks many many times. Mr. Hylton's team hauler had been in an accident the season before his death but they still made it to the next ARCA race when they showed up at the DuQuoin mile dirt track Labor Day weekend 2017 with a short school bus towing his car on an open trailer. I had never seen a school bus used as a race team hauler before, but the open trailer was not a new sight. Making it to the next race was in doubt right up to the minute they arrived at DuQuoin as they were the last team to arrive. But they made it like the true racers they are.

Mr. Hylton's was a low budget team, even by ARCA standards. With veteran driver Brad Smith behind the wheel the last few years, the team carried on in 2018 after Mr. Hylton's accident and they were there every week. I remember a race weekend not that long ago when Mr. Hylton was still driving when the team had fans (or anyone who happened to walk by) taping dollar bills to the #48 car. Some people might have thought it was gimmicky but my guess is they really did need the money as there were many times when they would show up with hardly any decals on their car. You have to give them credit for uniquely drawing attention to the team and it showed that they loved to race. It's one of the reasons I always had so much respect for Mr. Hylton since you knew they probably weren't going to be competing for race wins but they were at every race working hard anyway. That spirit continued on even after his death as Brad Smith continued to make each race and the crew was always working their butts off to get out for practice and run as many laps as they could in the race. 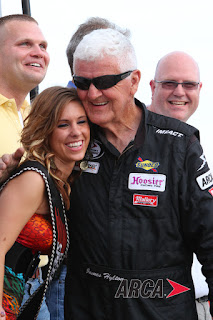 I think Mr. Hylton fancied himself as somewhat of a ladies man and he always impressed me as someone who fit the definition of a southern gentleman. Everyone seemed to like him and he was a fan favorite everywhere that ARCA raced. For someone who had been competitive in NASCAR during the 1960's and 1970's, it was amazing to watch him work the crowds anytime there was an autograph session. He was really in his element at the annual black tie gala ARCA holds at the end of each  season - it seemed like everyone wanted their picture taken with Mr. Hylton. As the event photographer for ARCA since 2013, I was more than happy to oblige. I really felt his absence at this year's awards banquet and the ARCA staff did an excellent photo tribute to Mr. Hylton with numerous photos that pre-date my regular involvement with the series. In this photo from 2011, he is sharing a light hearted moment with the Winchester Speedway trophy girl during driver introductions prior to going out to race. You can tell by the reaction of others around him that was loved by everyone.

Losing people you care about is never easy and not having Mr. Hylton around the ARCA garages this season after the accident was tough on everyone in the series. I know there are plenty of other stories about Mr. Hylton that others can add, but I just wanted to add my two cents worth and do what I could to honor a gentleman racer who I liked and respected. And for James Jr., and the whole Hylton family, I say Godspeed and thank you; I'm so glad I got the chance to know you. More of my photos of Mr. Hylton can be found by clicking here. 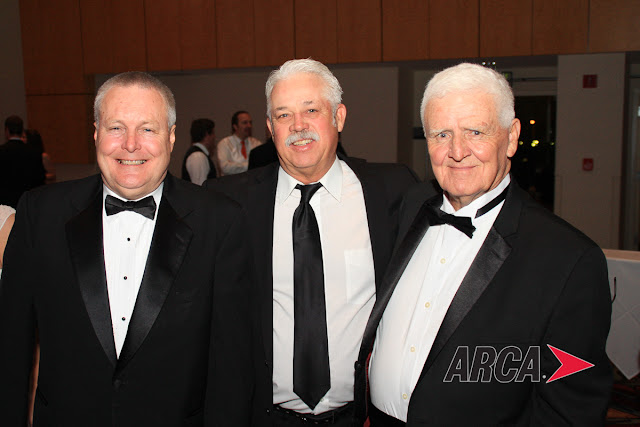 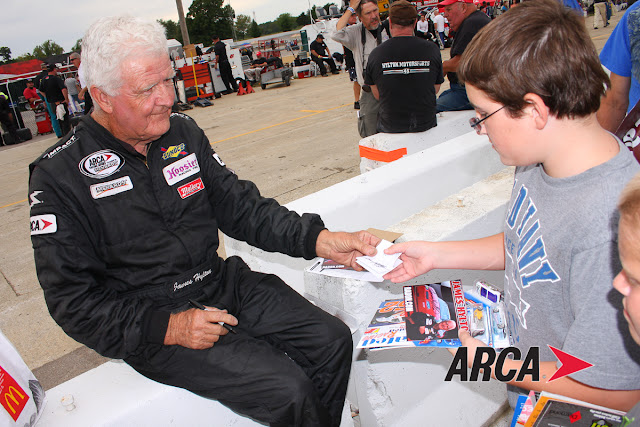 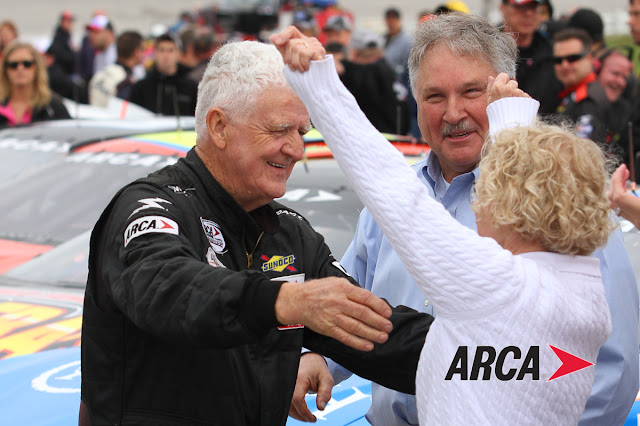 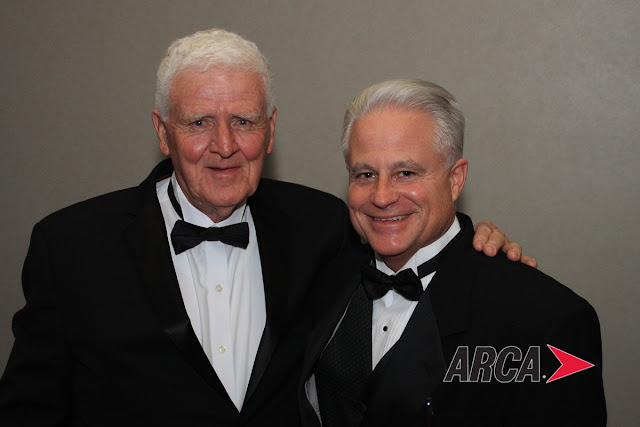 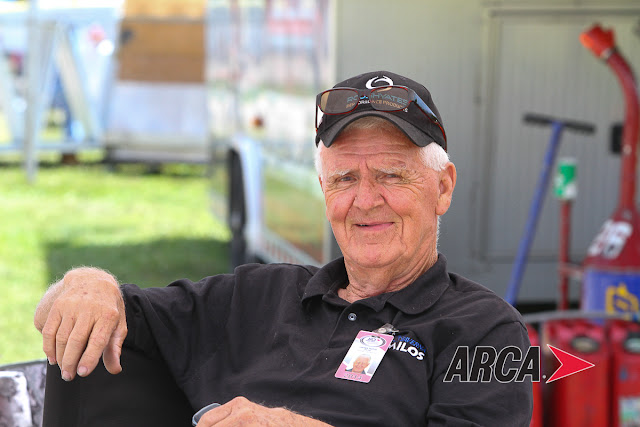 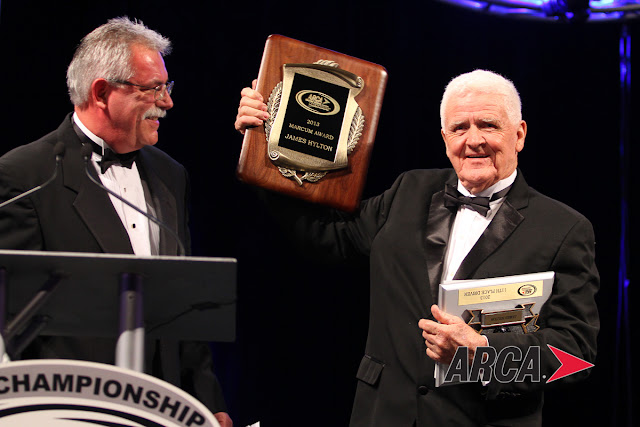 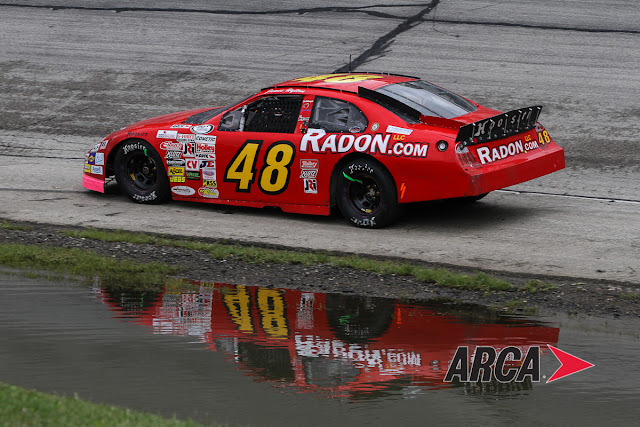 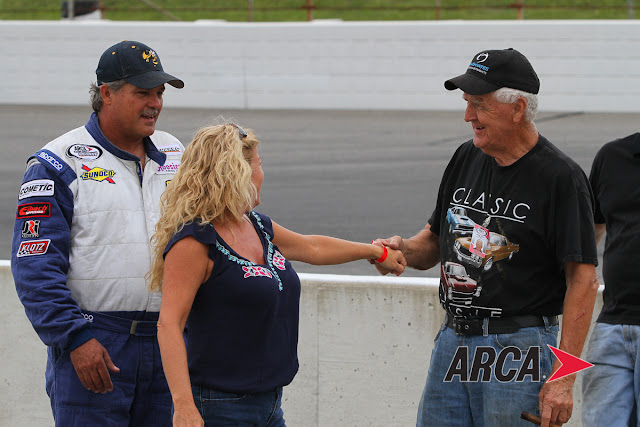 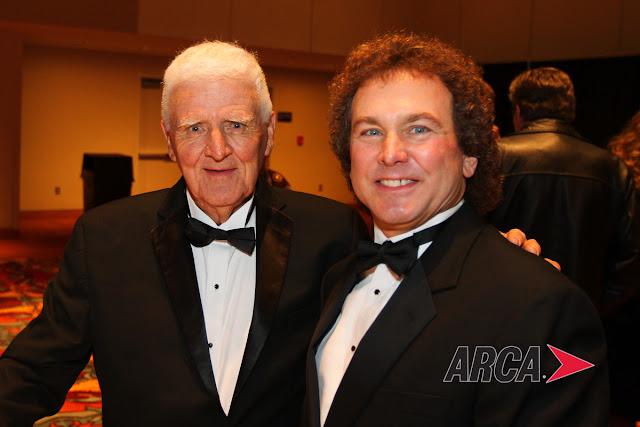 Nicely done, Jay. The pictures are excellent, but your words expressed a true admiration for Mr. Hylton.

I was always sad to here of a racing death - reminded me of being in the car of the way to Columbus, learning of Al Holbert's death.

Very much enjoy your posts