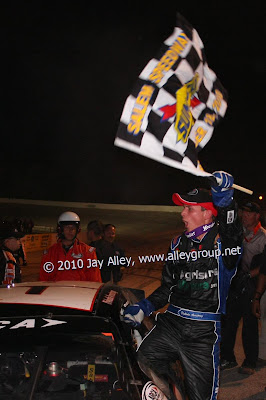 Hoosier young gun Dakoda Armstrong held off Joey Coulter to win at Salem Speedway last night before a large and enthusiastic crowd. The young man with the movie star good looks picked up his second career ARCA win to go along with his equally thrilling victory at Talladega earlier this year. Armstrong and Coulter fought it out over the last 40 laps at a torrid pace, slicing their way through heavy race traffic, eventually lapping everyone up through fifth place as Tom Hessert and Mikey Kile were the only other drivers to finish on the lead lap. Pole winner Craig Goess had an early lengthy pit stop to fix a broken throttle linkage so his spot atop the season point standings was short lived. Tom Hessert now leads the ARCA point charts over former Salem winner Patrick Sheltra and Goess, but the margin from first to third is only 30 points with two more races to go.
Having been to Salem several times for the ARCA races, this one was different than any of the others I had shot. The usual beating and banging didn't materialize and this race was marked by long periods of green flag racing. This eventually worked to Armstrong's advantage as he kept his fenders clean and never put a wheel wrong after taking the lead on a restart from Justin Marks. Dakoda is now in fifth in season points behind Frank Kimmel and ahead of Marks with an outside shot at the season title if the other contenders ahead of him run into trouble. As we were walking along pit lane before the race, I mentioned I would like to see Dakoda win and that his Talladega win was one of the most exciting stock car races I had seen, with his multi-car pass on the last lap there to win. On this night at Salem, he was not to be denied and showed the maturity of a wily veteran cutting through traffic without losing much momentum lap after lap to the checkers. His crew was ecstatic afterwards and Dakoda said he felt like he had Coulter covered as long as he did not give up his line. To Coulter's credit, there were several opportunities to put a bumper to Armstrong, but he raced him clean right to the end and his second place was well deserved.
I love the racing at Salem where the tight confines make for exciting battles. The racing line is different from one end of the track to the other, with Turns 1 & 2 offering multiple grooves while the fast way through Turns 3 & 4 is up high right against the wall. Pit lane is notoriously crowded as the stockers pit from pit entrance coming off of Turn 4 all the way around Turn 1 and there is only one exit lane. Tight, bumpy, fast and racy: that sums up Salem Speedway and the ARCA boys put on another great show for the fans on a beautiful night in southern Indiana. I also had some fun tweeting from the track during the race with my recently added Twitter account and I expect I'll do more of that from races in the future. On this night, Dakoda got his just rewards, I got pictures for likely the last night of my 2010 racing season and my ARCA friends head off to Kansas and Rockingham to finish off their chapionship chase in style.
Posted by Jay Alley at 10:47 AM