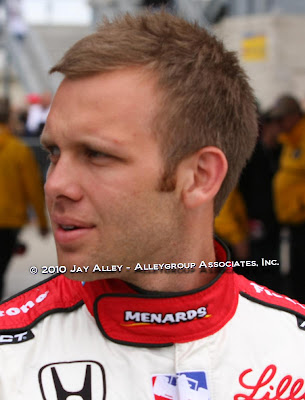 With the IZOD Indycar series season winding down, part-timer Ed Carpenter snatched the pole from Will Power at Kentucky Speedway yesterday for tonight's 300 mile event. This race marks the 200th since the formation of the Indy Racing League and Indycar series and if last weekend's wild affair at Chicagoland is a prelude to tonight's action, fans here at the track and watching on Versus will be treated to quite a show. It is fitting that Carpenter is on pole here as he nearly won his first Indycar race ever last year at this track after a 20 lap side-by-side battle with Ryan Briscoe, losing in a photo finish. Ed's teammate for this race is Dan Wheldon who will start third. The most fun tonight may be watching Tony Kanaan and Ryan Hunter-Reay push through the field from the last row after Tony's car setup was woeful in qualifying and RHR hit the fence yesterday. I am set up in the Kentucky Speedway media center now and will bring photos and more race coverage later this evening as the Firestone Indy Lights race rolls off in a little over an hour from now and the Indycars follow under the lights. It should be spectacular and I am so glad to be here for the 200th Indycar event under the IRL sanctioning. It's time now to go look for drivers and people in both series, then the engines will fire and the ethanol exhaust will be wafting through the cool Kentucky night air. I can hardly wait.
Posted by Jay Alley at 4:30 PM