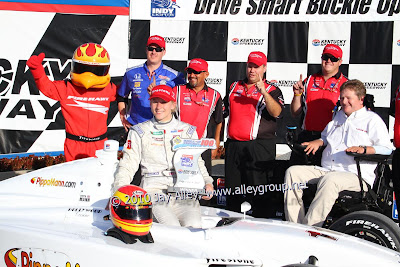 Lady racer Pippa Mann picked up her first Firestone Indy Lights win today by running away from the field after an early red flag due to a nasty three car crash in Turn 4 at the end of the first lap. She was so excited in Victory Lane that it looked like she didn't know what to do next in the process of accepting victory awards! We were at Nashville when Ana Beatriz got her first Indy Lights win and it is great to be here at Kentucky Speedway to see another up and coming woman racer find her way to the head of the charts. She crashed out early at Indy this year after winning the pole but that wasn't her fault as others spun and collected her then. She had them covered today and another win is added to the record books for Sam Schmidt, who always seems to find the best young drivers and get them to Victory Lane in Indy Lights. Well done Pippa! She has come a long way in the last couple of years and having Sam continue to see success is a great thing for the Firestone Indy Lights series. Phillip Major spun and was hit by Sebastian Saavedra and then by Stefan Wilson to bring out the early red flag but everyone walked away from what could have been a very nasty situation as Major slid down the track and competitors had to go high and low to miss him. Unfortunately, not everyone did. Once the race resumed, Pippa set sail and led the entire race of 67 laps to the checkers. Before I head out for the Indycar race, here's a quick slide show of the Lights action.
Posted by Jay Alley at 7:20 PM