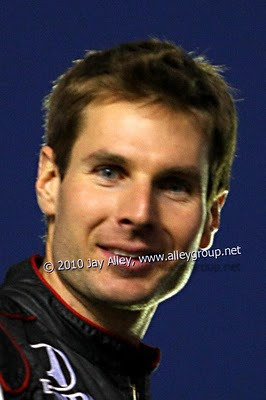 The race driver with the superhero name, Will Power, leads the IZOD Indycar brigade into Japan this weekend with a loose grip on the series' championship points lead and hopes to capitalize on his recent improvement in oval track performance with only the Homestead oval to follow. Already the road course season champion, Power can expand his slim season points lead with a top finish. Unfortunately, Motegi has been the scene of trouble for Penske drivers in recent years and all it will take is a DNF or a bad pit stop for Power, ala Kentucky, to give his Ganassi opponents Dario Franchitti and Scott Dixon the room they need to squeeze into the top spot in points. Power's teammate Helio Castroneves still has a shot at a top season finish, but must win to leapfrog the Ganassi boys and take points from them in the process. Motegi has been the scene of Penske's undoing in the past as Helio lost a sure win on a fuel gamble to Danica in her only Indycar win a couple of years ago and Ryan Briscoe threw away the win last year when he hit the pit wall on his last pit stop while leading. Best case scenario for Power and Helio is for them to finish 1-2 and for Dario and Dixon to have troubles that leave them more than 54 points behind heading to the finale at Homestead. However, I would really love to see Power keep his points lead and have the series title be a three man shootout at Homestead with Power coming out on top, as he is a very likable guy and is the comeback story of the year in Indycar racing following his serious accident and back injury at Sonoma a year ago.
The Indycar Rookie of the Year title will also likely go down to the wire as Simona De Silvestro leads Bertrand Baguette by a slim margin. These two have been surprising in their first seasons and Simona has been a breath of fresh air with strong performances from her small team. Baguette has been the more surprising of the two, coming to the series as a relative unknown with no oval track experience while Simona hit the scene with Atlantics wins on her resume as more of a known quantity. Her poor finishes have most often not been of her doing, getting crashed out by others or simply finding herself in the wrong place at the wrong time. Baguette is coming off his best oval track qualifying performance of the year and needs another strong weekend for his team to put him in position to take the rookie title. With both drivers battling for season honors and recent F1 interest expressed in Simona, lets hope the fireworks are left for after the races and they can both finish the year with impressive finishes. I'm sure their teams will be keeping an eye on each other this weekend to set up a final showdown at Homestead. A season title could be the springboard either of these teams towards new sponsorships and the promise of even greater success for 2011. 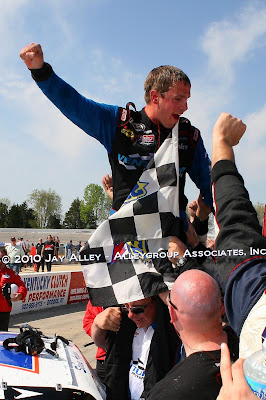 Meanwhile, halfway around the world, we will be at Salem Speedway in southern Indiana for the ARCA stock car race watching another series championship battle wind down. By the time we get back from Salem late Saturday night, the Indycar race will be underway on Versus and the ARCA series will be down to its final two races with several drivers in position to take the season title. Steve Arpin (pictured) won at Salem this past April and will be a contender to win again this weekend driving for the Venturini team. If he had not missed two races for NASCAR events, he would also be a contender for the season title - he could still find his way to near the top of the points battle with some racing luck and if the current leaders have problems this weekend. And lord knows, Salem has a way of creating problems for drivers with its rugged surface, high banking and heavy traffic often making life difficult for even the best of the bunch. Current points leader Patrick Sheltra has won at Salem before so he is going to be a factor and needs a solid finish to stay ahead of Craig Goess and Tom Hessert with only a 15 point differential among the top three. Legendary ARCA champion Frank Kimmel is fourth, only 140 points out of first place, and has won at "home track" Salem more often than any of the current driving crop. Justin Marks is in fifth 185 points behind Sheltra so anything can happen this weekend and give these, and other drivers in the top ten, hope heading to the last two ARCA events at Kansas and Rockingham. Last year's season title essentially went down to the last lap at the Rock and I see no reason why it won't happen again.
By now you may be wondering what these series and Motegi and Salem have in common. Aside from having season points battles that are likely not going to be decided until the last laps are run and both are racing on oval tracks, there's another element that many may not have considered. Years ago while working for the State of Indiana, I had the pleasure of working with many Japanese auto companies to help find locations for manufacturing and/or distribution facilities in Indiana. They uniformly seemed to love southern Indiana, and many eventually decided to locate in communities such as Seymour and Columbus, both of which we drive through to get to Salem. Of course Honda's new plant is in Greensburg, also in southern Indiana, and the state has become a hub for suppliers of all the major Japanese auto companies. I was often told that parts of southern Indiana reminded the Japanese of their home country - rolling hills lush with greenery, full of opportunities for business. Having never been to Japan, I had to take their word for that and much has changed in the world - and in auto racing for that matter - in the 20+ years since I held that job. Who would have imagined back in the '80's that Honda would play a vital role in Indycars and in the economy of the Hoosier state? Who would have thought that Toyotas would be fighting for wins on the high banks of the Salem half-mile where ARCA has run 87 times before? Not me, and probably not many others either.
Wherever you are in the world this weekend, enjoy the races. I'll see you at the track, Canon vest on and hat turned backwards for good luck, bringing home pictures for American Motor Journal.
Posted by Jay Alley at 8:51 AM