The poem "The Rime of the Ancient Mariner" by Samuel Coleridge included the famous lines,  "Water, water, everywhere, And all the boards did shrink; Water, water, everywhere, Nor any drop to drink." Shooting motorsports is like that sometimes too, especially for road racing events. Needless to say, water and camera electronics are not a good combination but sometimes preparation will get you through a downpour. Sometimes you just get lucky. And sometimes you just get drenched.

The theme for the first week theme of my personal 42 Day Daily Photo Challenge on Twitter was "fire". For the second week, I chose "water" as my theme and you will see from the photos I posted that there was plenty of the wet stuff to go around. The story behind each photo follows, but the overriding lesson is don't forget your rain gear!

On this day in June 2008 I was shooting for the defunct American Motor Journal (AMJ) at Mid Ohio Sports Car Course, and I just got lucky rather than soaking wet. I had my rain gear since it always seems to rain on races at this road course, and I had just crossed the Honda bridge to the outside of the track to a location at the bottom of the hill after the esses. A downpour had hit the area and there was standing water everywhere. Luckily, that area of Mid Ohio is shrouded in trees so I was able to shoot under cover for awhile until the downpour passed. I stayed relatively dry and my cameras did too. This time. 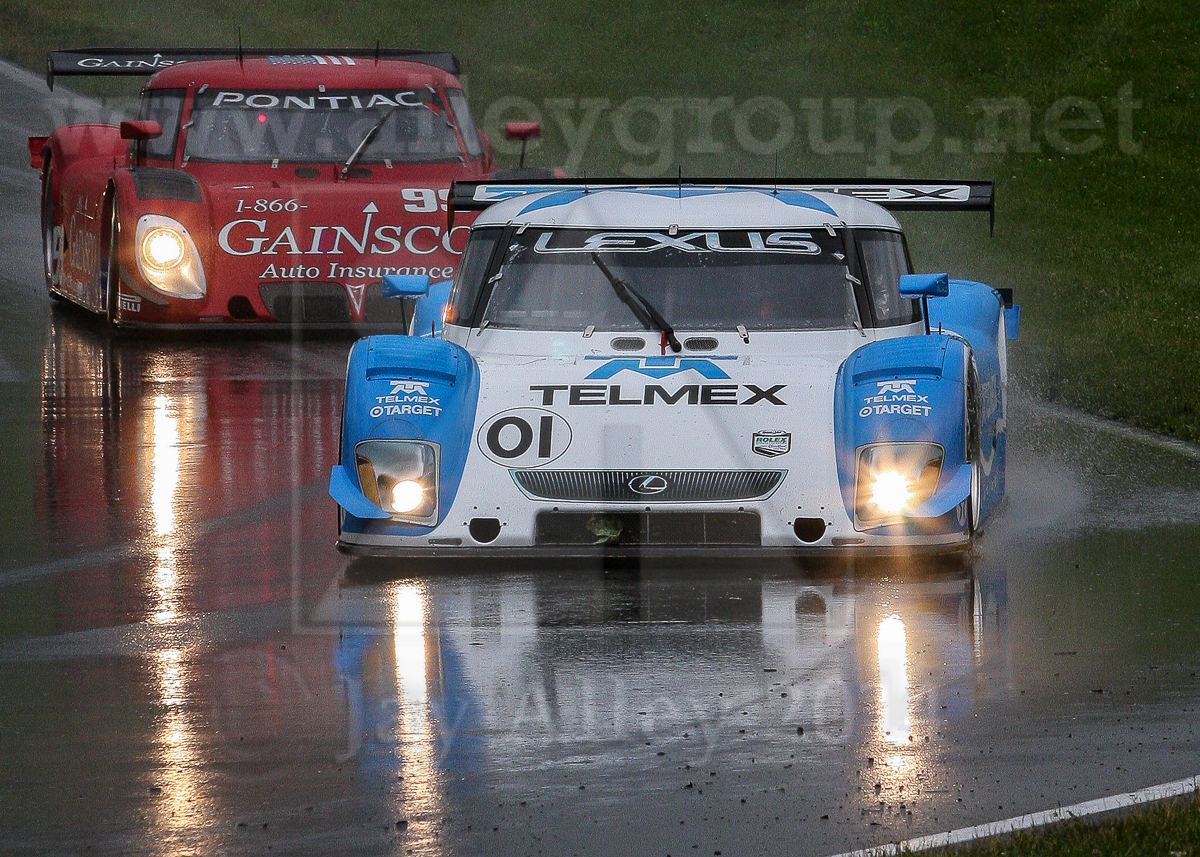 
While I don't normally shoot the two wheel crowd, the MotoGP event at the Indianapolis Motor Speedway was a fairly new thing in 2009 so I had to go check it out. I didn't have credentials for the event but the IMS road course offers plenty of locations to get clear shots without any catch fencing in the way. This shot of multi-time MotoGP champion Valentino Rossi was taken during practice for the event and I only took one camera body and one lens to make sure I could shoot and deal with the elements with minimal risk of damage to my equipment. I am still amazed that these riders do what they do under any circumstances, let alone on a green racetrack which is thoroughly soaked. 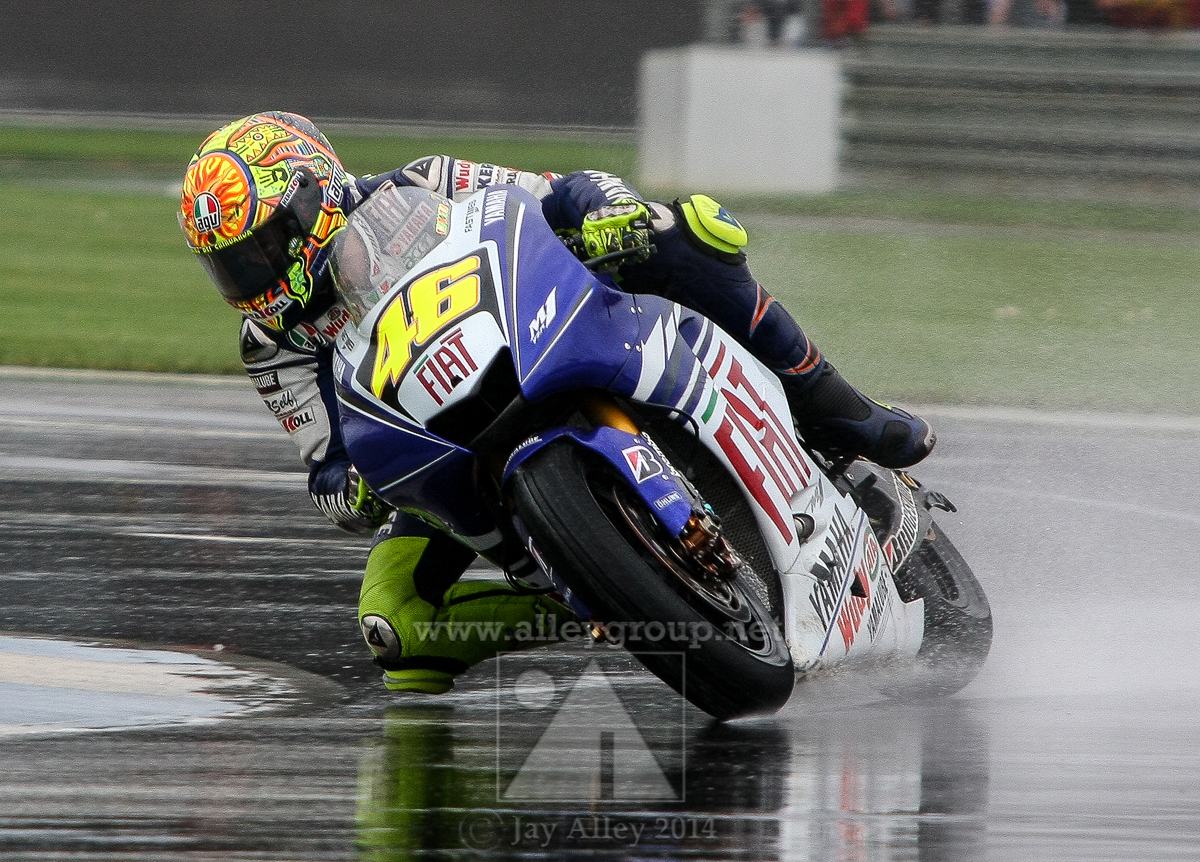 
This photo of Michael Andretti (3) and poppa Mario (6) racing into the esses at Mid Ohio is from 1990 and was shot on film, most likely Fujicolor. I had gone to the race with my stepson and a friend and his son and got this shot from the spectator fencing along the track as the cars begin to head uphill in the esses. My first race at Mid Ohio was in 1982 so going there for the Indycar weekend has been a long standing tradition. With its mid-summer weekend schedule slot, it could be 85 degrees with 90 percent humidity one minute and then pouring down rain the next. On more than one occasion, this race has been wet, dry, wet, dry and wet again so shooting here is always an adventure in the summer. 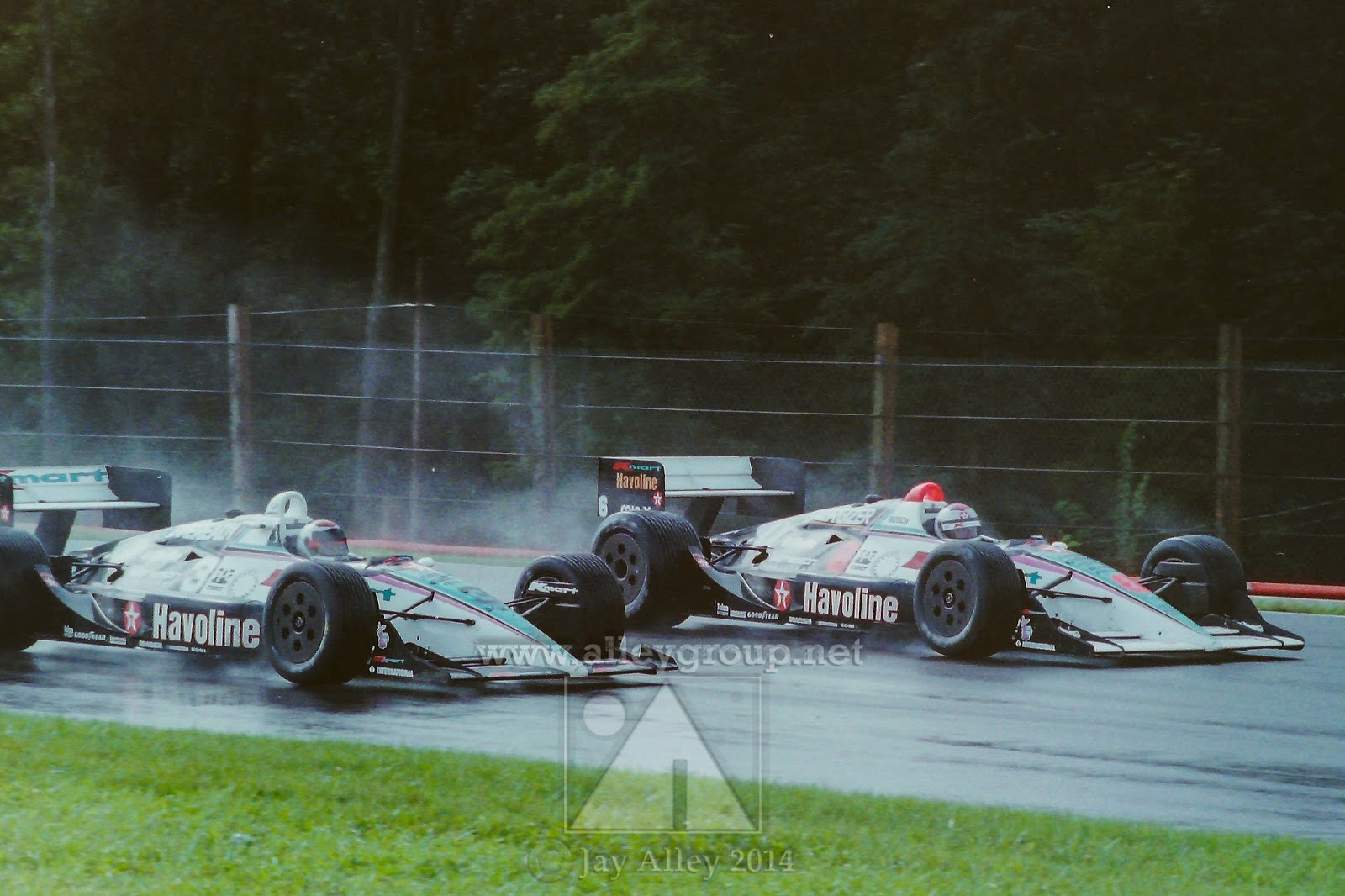 The inaugural Grand Prix of Indianapolis in 2014 saw Indycars running in the rain at IMS for the first time ever as far as I know. I was shooting for motorsport.com, working the pit lane during practice and qualifying when a brief but heavy rain shower hit. The old song says "it don't rain in Indianapolis" but we all know that's not true! I escaped the downpour under the Pagoda overhang where the yard of bricks runs through the building and within a few minutes, the rain had stopped but the track was soaked. Shooting the cars going north on the wet front stretch yielded some nice photos with large rooster tails of spray being thrown into the air. Unfortunately for Ryan Hunter-Reay, not long after I took this photo, he hydroplaned through a puddle coming onto the front stretch and cracked the wall while going for the pole. It has been awhile at Indy since I've heard the sound of anyone hitting concrete rather than the SAFER barriers, so that was a memorable day for a lot of reasons. 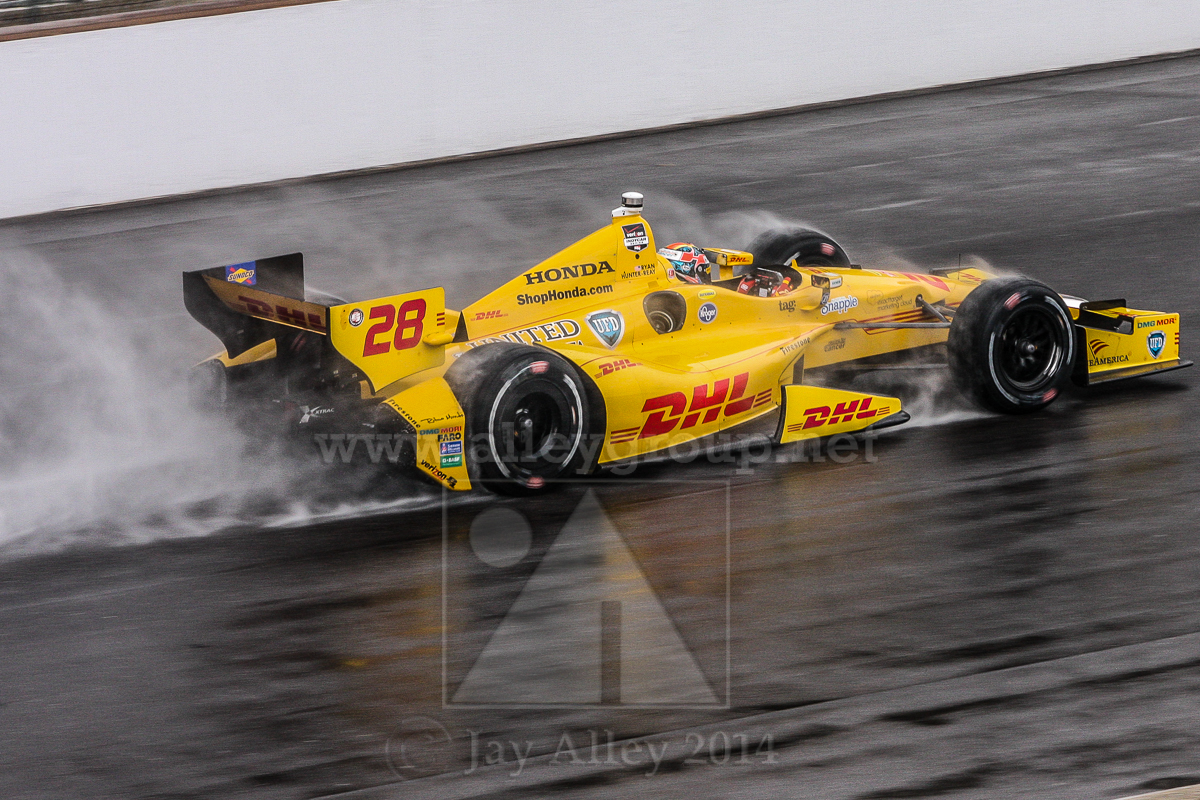 
My photographer friends will never let me forget the American LeMans series race at Mid Ohio in 2011. The ribbing that weekend was endless and continues even now, with witty comments such as "Don't you know when to come in out of the rain?" Apparently, I didn't. I was determined to get photos in the wet conditions, but I underestimated how wet it would become. I had been shooting in the carousel as the skies darkened, the field was running slowly under yellow and there was less than 30 minutes left in the timed race. I decided to cut through the paddock as the rain started falling more heavily to get to the exit of Turn 1 past the infield bridge, as I thought the restart might be dicey with the conditions worsening. As I arrived at Turn 1, it seemed like a monsoon hit. I got this picture - which is one of my favorite rain photos - but I paid the piper for sticking it out. More on that with my Day 14 photo... 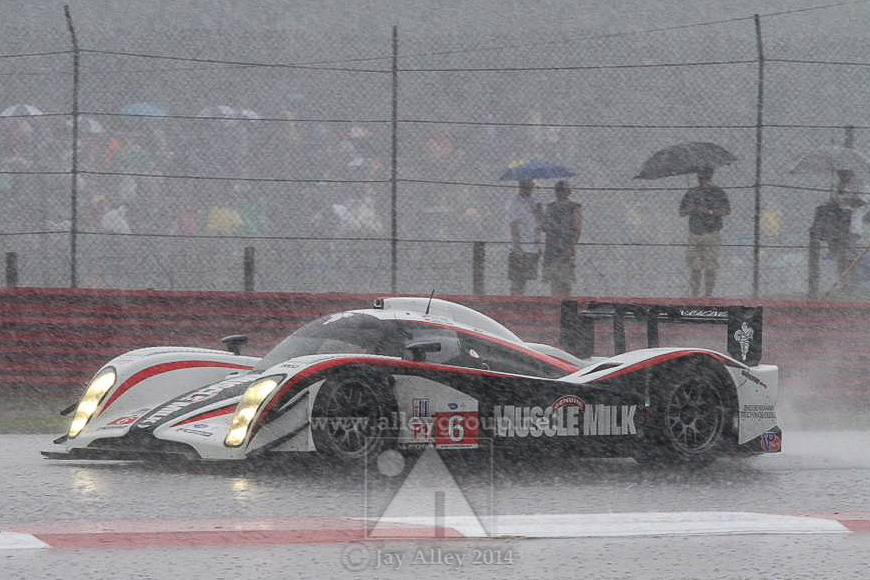 
There have been periods of time the last few years where it seemed like every race I shot was hit by rain or a rain delay. So now when I am not at a race and it rains, I like to post comments on Twitter or Facebook that "it's not my fault" and my photographer friends are all in on the joke. At Mid Ohio in 2008, both the Rolex Grand Am and Indycar weekends were effected by rain and this shot was taken in the carousel after a downpour during the Indy Lights race. One of the great things about shooting racing in the rain is seeing the different lines the drivers take compared to what would be normal on a dry track. This shot is a good example as this section of Mid Ohio leaving the carousel is usually only one groove but Ana Beatriz makes her own middle groove while chasing two other competitors. 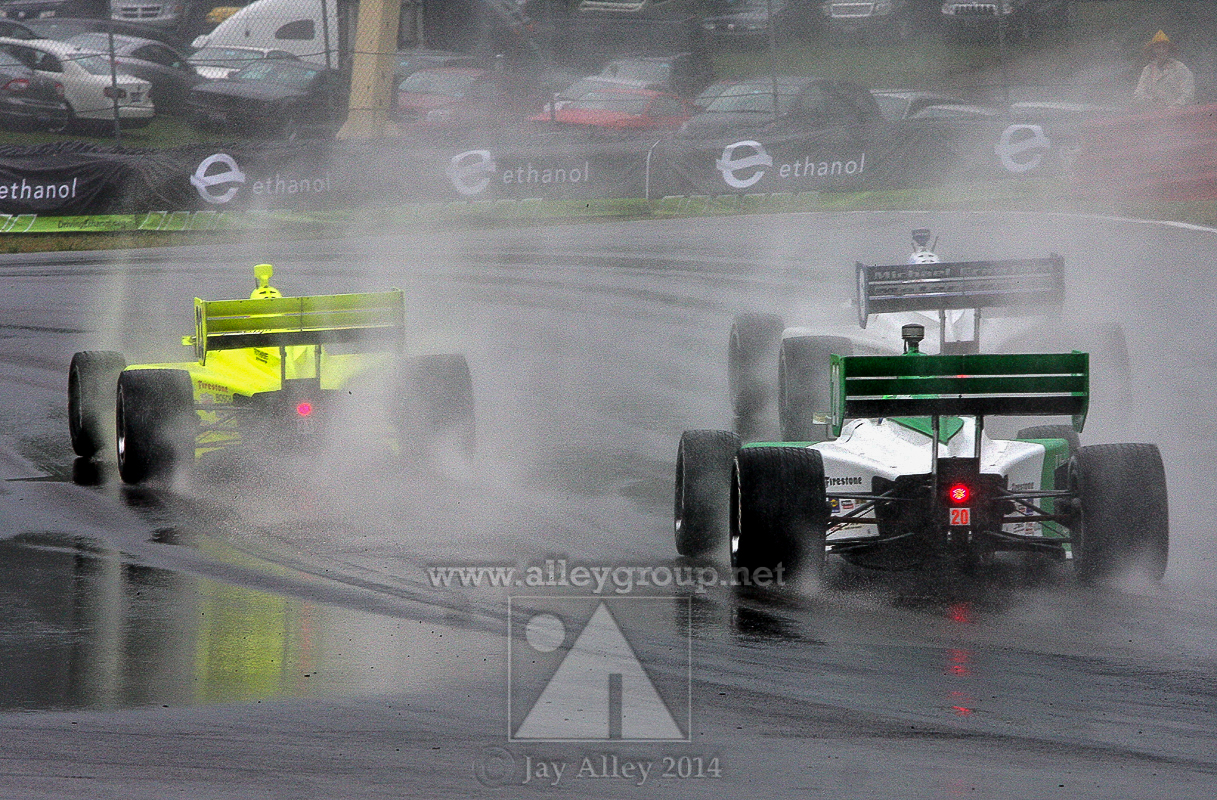 
Continuing the story of my near drowning at Mid Ohio during the ALMS race in 2011, this shot shows the depth of water after the monsoon hit as the Rahal BMW driven by Joey Hand splashes through Turn 1. Everyone was just creeping through this turn by then and the race was red-flagged shortly after this so I headed to the pit lane to shoot the winners exiting their cars and the victory lane celebrations. I was completely soaked by this time with water running down my arms and straight onto my cameras. The towels I carry for such times were soaked too and I threw them away on my walk to the pits. Even having my gear covered with plastic bags provided no relief as there was just too much water to keep anything dry. 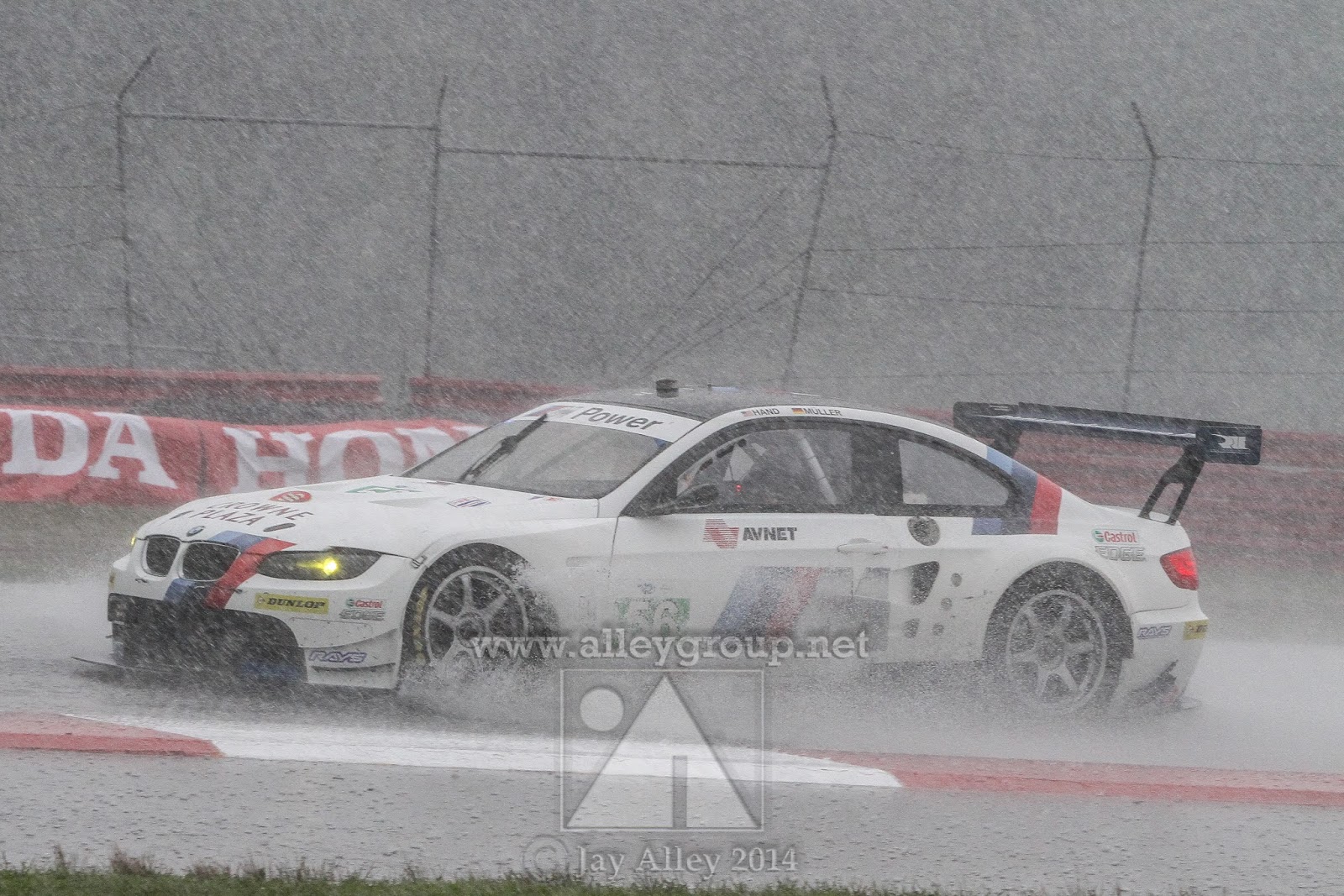 Then the nightmare really began. First the view screen on my 40D went blank. Then my 7D started acting up. The 40D quit working completely and I don't think I ever did get any victory lane photos. That night at the hotel I took everything apart and hoped to God my cameras would dry out since the Indycar race was the next day and I was still supposed to shoot that. Sunday dawned clear and sunny thankfully, so upon arriving at the media center in the Tower that day, I took everything apart again and laid both cameras on a ledge by the window hoping the morning sun would cook the moisture out of them. Both cameras came back to life as the day wore on and I still use them today. I know the Canon techs got a good laugh out it the next May at Indianapolis when I took both cameras in to get cleaned and checked at IMS. I think I've earned my reputation as the "regenmeister", so if we go to shoot a race together, you better prepare for rain. I know I will get some photos!