Having already used the themes of fire, water and air for the first three weeks of my personal 42 Day Photo Challenge, naturally "earth" came next for Week 4. When I started with these elemental themes, I thought I would have an easy time coming up with racing photos to post each day on Twitter @alleygroup. For the most part that has been true. Finding motorsports photos that I've taken which relate somehow to earth has proven to be the most challenging yet, despite having a library of pictures from over 30 years of shooting racing. Dirt track racing photos were the obvious choices but where's the challenge in that? Naturally I had to use a few dirt track shots since that's where my love of racing began, and the end result of the week was I ended up going back to my roots, which came as a bit of a surprise. Hopefully you will enjoy my photos, and the stories behind each one, for this "earth" themed week. Next week's theme will be "joy" in racing.

Earth: Day 22
Getting credentials to shoot the Formula One races at Indy was almost impossible for me at the time, but it really didn't matter in 2006. I lucked out that year with a prime vantage point for Nick Heidfeld's first lap flip in the USGP as I had gotten free tickets that year and was sitting in oval track Turn 4 with a great view of the start. I stayed there just long enough to shoot the next restart and then started wandering around the circuit looking for other angles since there are plenty of good places to shoot around the road course at IMS. I figured I wasn't going to get another spectacular shot if I stayed in the seats so roaming was the best option. Moving around a racetrack for different viewpoints is one of the best parts about shooting road course racing anyway. 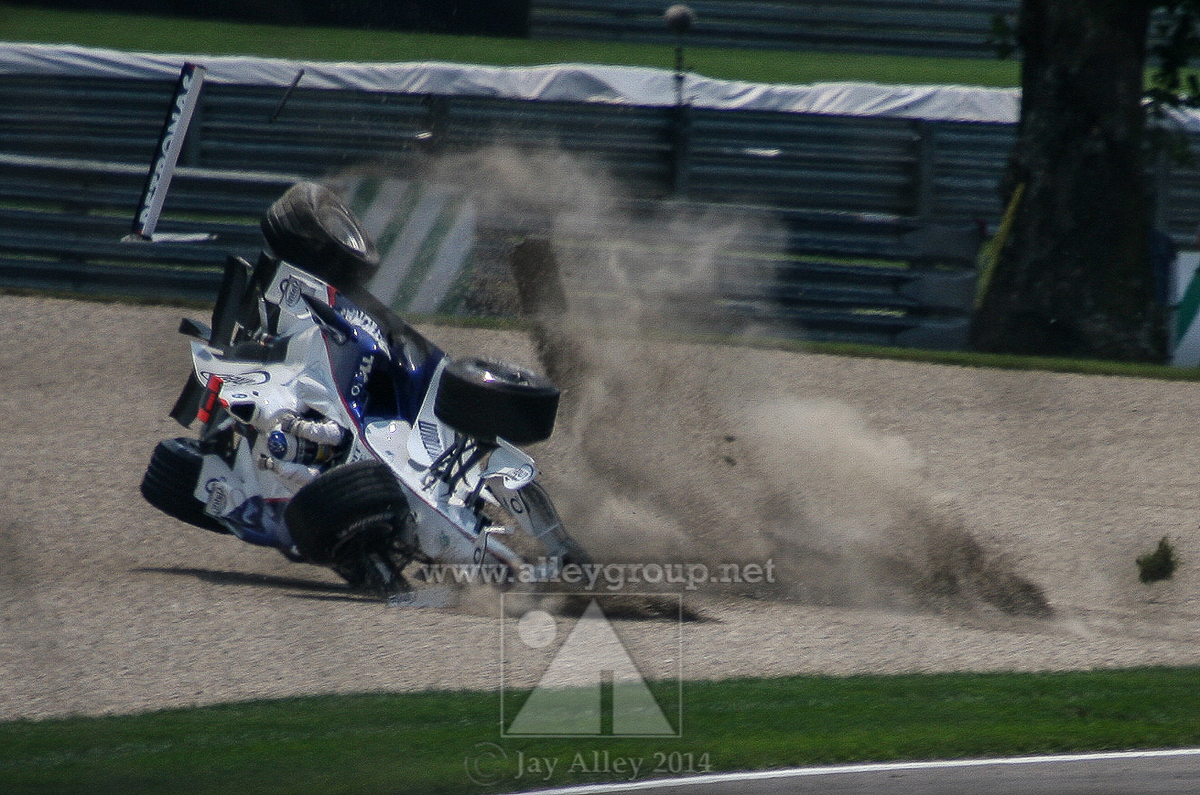 Earth: Day 23
The following photo of Jeff Swindell sideways in Turn 1 at the Indiana State Fairgrounds dirt mile track is from the Hoosier 100 USAC Silver Crown race in 1984. I had originally posted that this photo was taken "around 1990" but after looking at my original negatives, the correct date is 1984 which was my first year shooting with credentials. I always liked shooting this race at the Fairgrounds since the action was usually heated and it was only five minutes from my house. Looking back at my negatives (mostly black and white) from the '80s, I can see how much I was learning as I struggled to follow the advice of the late Steve Snoddy who told me over and over again: "Fill the frame." That was easier said than done for a relative novice back then when the 700 horsepower Silver Crown beasts were roaring by inches from my feet. I would use my camera to protect my face from flying mud and rocks, peering just over the top as the cars raced past me, then quickly put my eye to the viewfinder to take a few frames with my trusty Canon A1. Thank God for skylight filters! 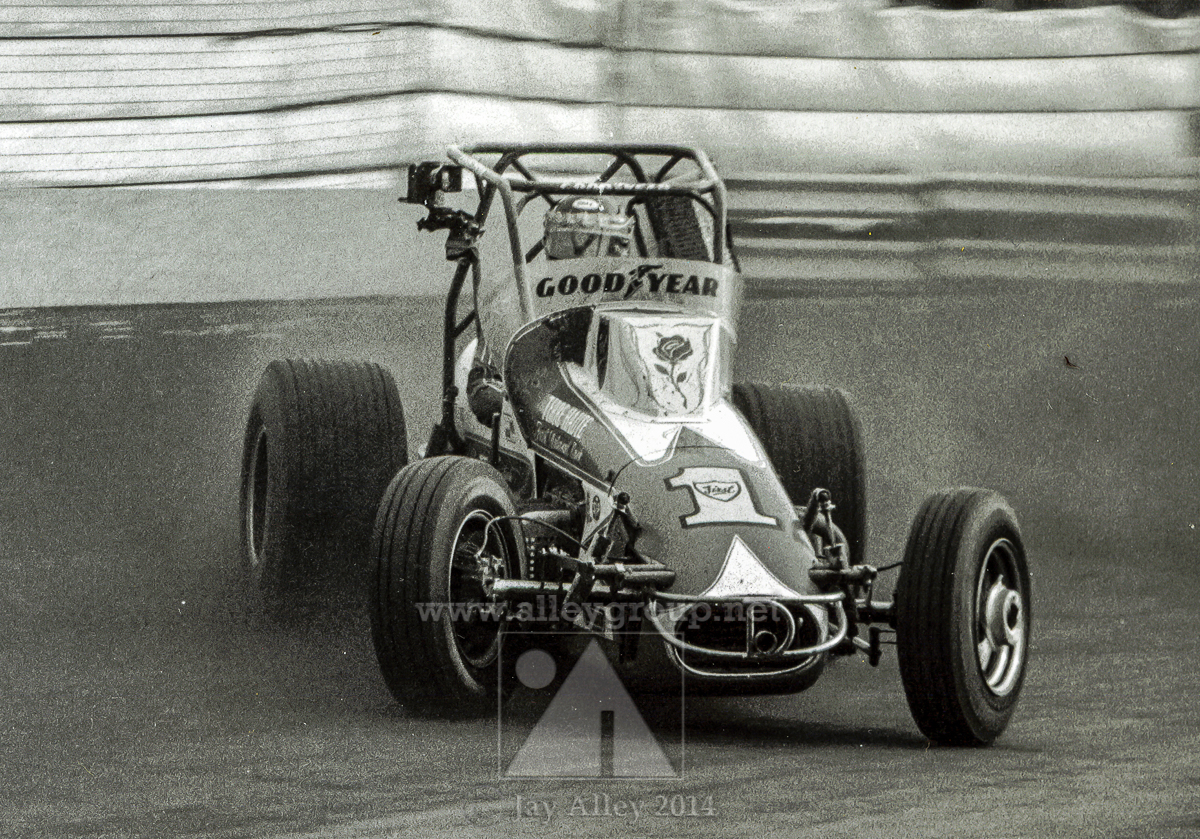 Earth: Day 24
Ryan Hunter-Reay found the gravel trap in style at Mid Ohio in 2007 during a morning Indycar practice session and I really felt lucky to get photos of the incident. I was positioned downhill of the right hander in Turn 9 and my focus was on the apex of the turn since cars often hike the right front wheel coming through before they go downhill into Thunder Valley. The entry of the turn is blind from where I was and suddenly I heard tires squealing; there was RHR, skidding off track into the sand. I was zoomed in so tight that my first few frames cut the car up but I recovered to get the last few in the sand with the whole car. Lighting is great at that turn in the morning but I also got lucky with my exposure as it had been set for the shady area of the track while the tire barrier at the back of the gravel trap was mostly sunny. The trap in the foreground ended up with a nice contrast of alternating shady and light areas, so maybe it is better to be lucky than good sometimes! 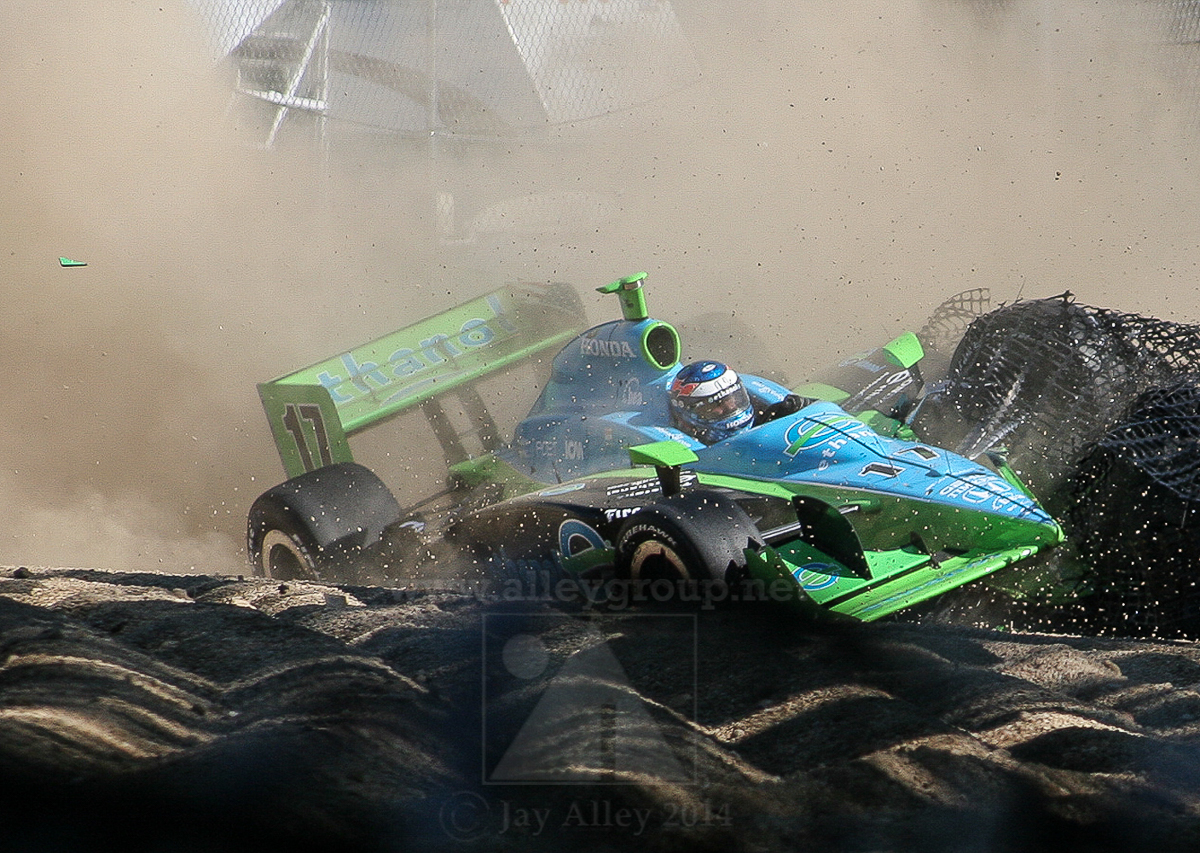 Earth: Day 25
This photo is a slightly different take on the earth theme, as it shows Paul Menard at the 2011 Brickyard 400 mowing the grass in Turn 3 to avoid the spinning Landon Cassill. I have always liked this shot as it is clear my subject is the #51 car and Menard just happens to drive through the foreground and tear up the Speedway's nice green grass in the process. Menard went on the win the Brickyard that year and this was a close call that he escaped to make it happen. 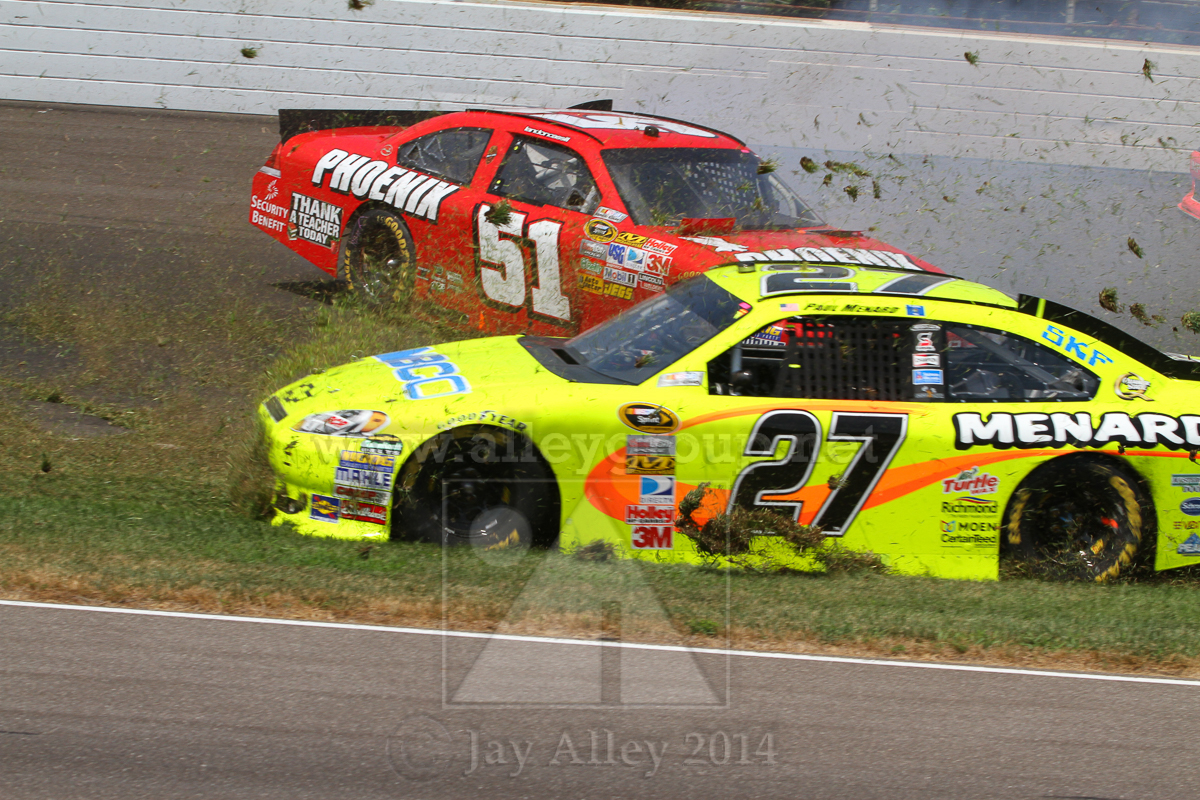 Earth: Day 26
This photo shows Dave Darland at Kokomo Speedway in 2009 hiking the left front wheel in his #2b machine while going three wide in USAC sprints. The right front wheel is barely touching the clay surface and I remember thinking at the time that he was going to pull a wheelie coming off the corner as he had so much traction going past me. I have always loved non-wing sprint cars as the drivers really have to manhandle their machines to go fast, not having the kind of downforce a winged sprinter would have. In these cars, to go fast you have to turn right to go left and Darland is one of the best on dirt at doing just that. He's nicknamed "The People's Champion" for a reason! 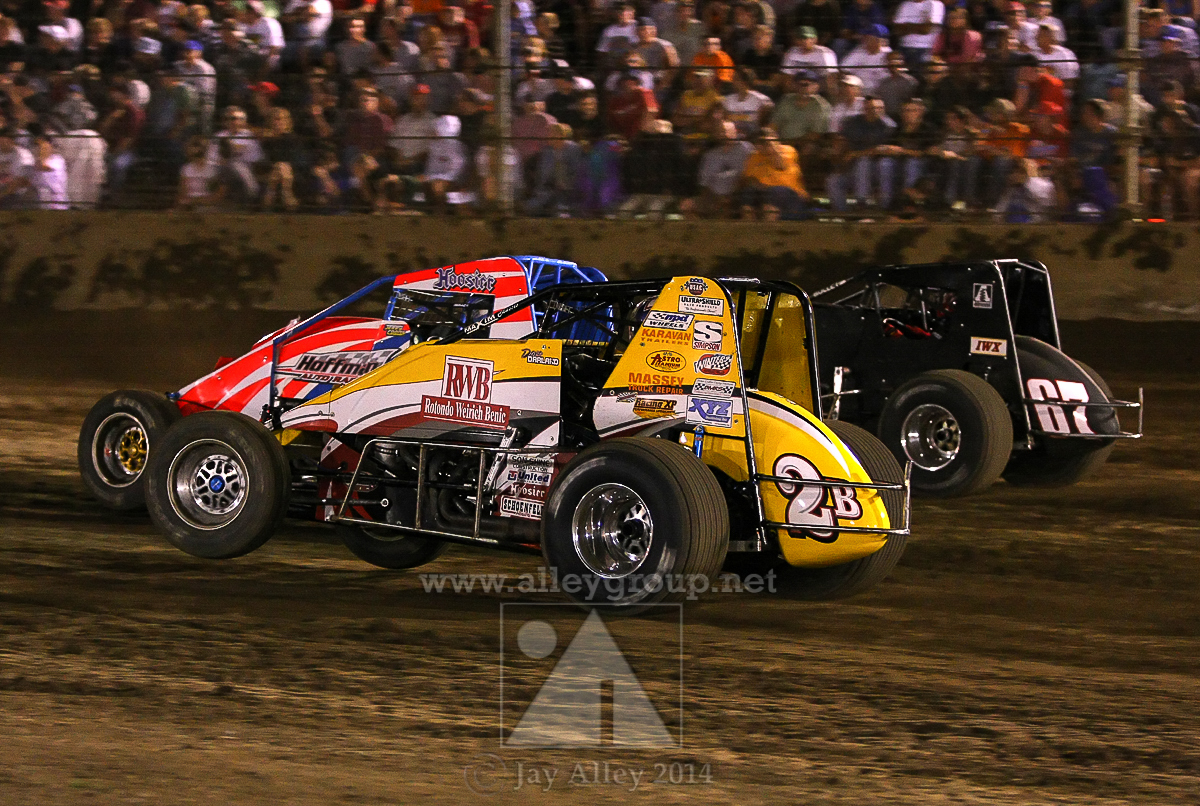 Earth: Day 27
I had to really massage the following picture of Tony Elliott from 1985, as it was an old print that was in bad shape which I had to scan. This photo comes from a little track in Warsaw, Indiana, my Mom's hometown, a track that my grandfather and namesake helped get built at the Kosciusko County Fairgrounds after World War II. Grandpa Jay was the person who helped start me on this path of racing fanaticism by taking me in the pits here when I was only four years old. I remember hanging on the board fence and watching the races in awe of the sounds and colors. The County Fair held stock car, figure-8 or open wheel races every night during the Fair as I recall and it was always a thrill to walk the pits with Grandpa. Sadly, the track is no longer in use but it was a great layout, maybe a quarter- or three-eights mile in length, with the grandstands built into a hillside overlooking the track and Winona Lake beyond. Grandpa's house was across the nearby canal from the track so even if we weren't at the track watching the races, we could still hear the cars. I loved that. Thanks Grandpa! 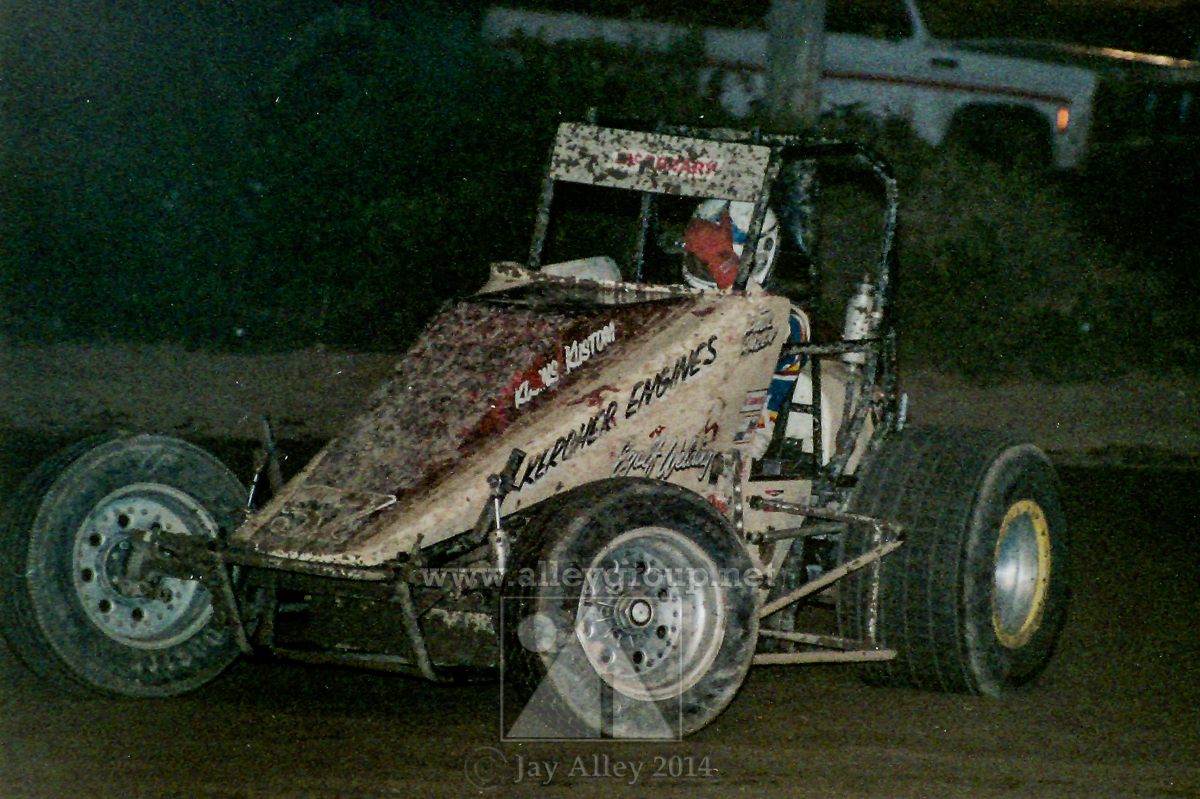 Earth: Day 28
It's kind of ironic now after a week of these "earth" themed photos that I find myself circling back to my racing roots at Warsaw. The following photo is also from 1985 and you can see Winona Lake in the background. Local dirt trackers ran stocks here and were a staple of the County Fair track. People would probably call them bomber stocks today but these guys were racers to the core. Go drive the back roads around Indiana and I will bet dollars to doughnuts that you will see quite a few of these cars, so beaten and battered that you can't even tell what brand they started life as. They'll be sitting in the weeds next to a barn, or waiting on a rusty trailer next to a garage with two or three others, as though they are ready to be hauled to the track to race again. It's no wonder that I'm still chasing race cars with a camera all these years later. It's what I love. It's what I do. I'm sure these guys can relate to that. 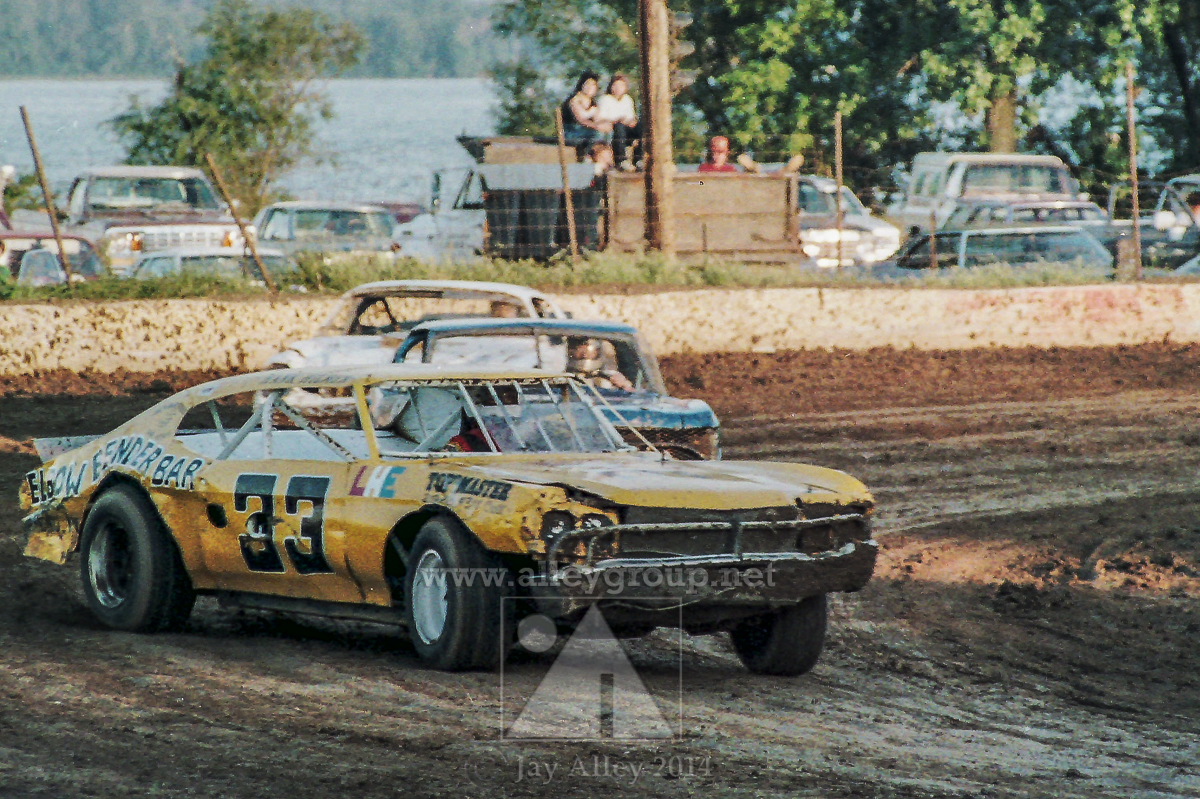