The Joy In Racing

For Week 5 in my personal 42 Day Daily Photo challenge, I chose the theme of "joy" in racing. Anyone involved in racing knows that emotions can run the gamut and that heartbreak is potentially around the next corner. But I wanted to accentuate the positive and show the outright elation that often accompanies this sport we love. After all, everything else is just a game. There seems to be a universal symbol for happiness and joy in motorsports, especially among drivers and their teams after winning a race. You see their arms thrust in the air, fists clenched, mouths open in screams of elation, and checkered flags or trophies held high. There's no time this is more true than when a driver wins for the first time, as Brandon Jones did in his first two ARCA starts this season. Looking back through 30 years of photos made the selections for this week very difficult, but I think these are some of my best. I hope you enjoy them and can share in these joyful celebrations. 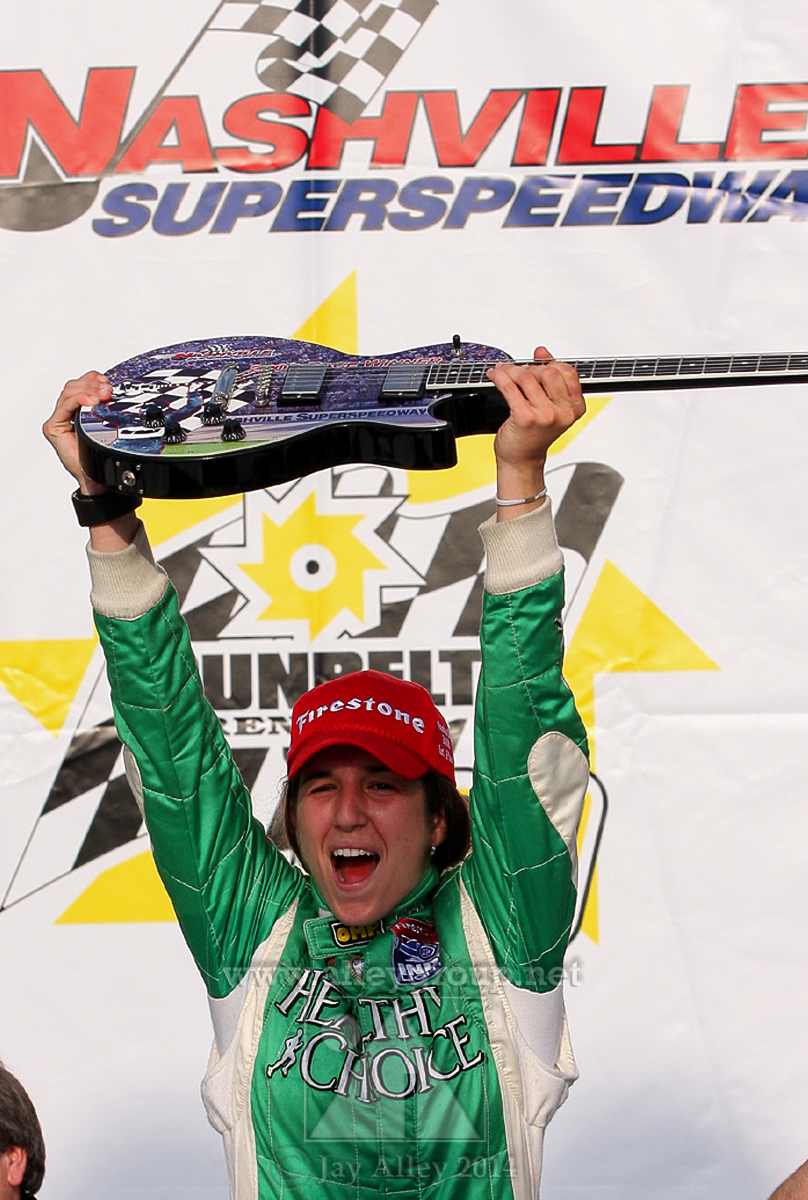 I have been very fortunate the last several years to witness some incredible racing and great moments in the sports. As a photographer, after you go to enough races you begin to feel you know the participants personally, even though you may only have had passing conversations with them. I especially enjoy shooting some of the feeder series races such as Indy Lights where you know the drivers are hungry for wins on their way up the racing ladder. And when that win finally happens, it's a special time and I will always be grateful for the opportunity to be there to document it. When Ana Beatriz got her first win in Indy Lights at Nashville Superspeedway in 2008, she was so excited to get that Les Paul guitar trophy.  Rarely have I seen a race winner more excited than she was that day. It was a thrill to be a part of that Victory Lane celebration.

Over the last couple of seasons, I have been the official photographer for the ARCA series at several races and it has been an absolute joy for me to have a front row seat to the accomplishments of some of ARCA's young drivers. Chicagoland Speedway's ARCA race in 2014 was a perfect example, when Mason Mitchell got his first win in the series amidst a season of consistent competitiveness. He ended up winning the season championship and I had the chance to shoot the season awards banquet and be a small part of his celebration. What made it even more special is that Mason created his own race team before the 2014 season started so his satisfaction in winning for the first time and being the series champ took on special meaning for him and his family.
Joy: Day 31

Helio Castroneves could be the poster boy for joy in racing and this shot from Victory Lane at Kentucky Speedway in 2010 is a prime example. Indycar fans are well aware of his fence climbing celebrations which have earned him the nickname of "Spiderman". It's the effusive Brazilian's nature to wear his emotions on his sleeve and when he wins, you know the party will be fun. I've been fortunate to be up close for Helio's winning celebrations at numerous races, and he seems to get just as excited winning a pole position as he does winning a race. I can only imagine what drivers must go through during the course of a race weekend, focusing so intently on being quick and outrunning their competition, and then experiencing the emotional release that must occur when they are successful. That is one of the best parts of being a motorsports photographer; I get to make some pictures and tell people "I was there". 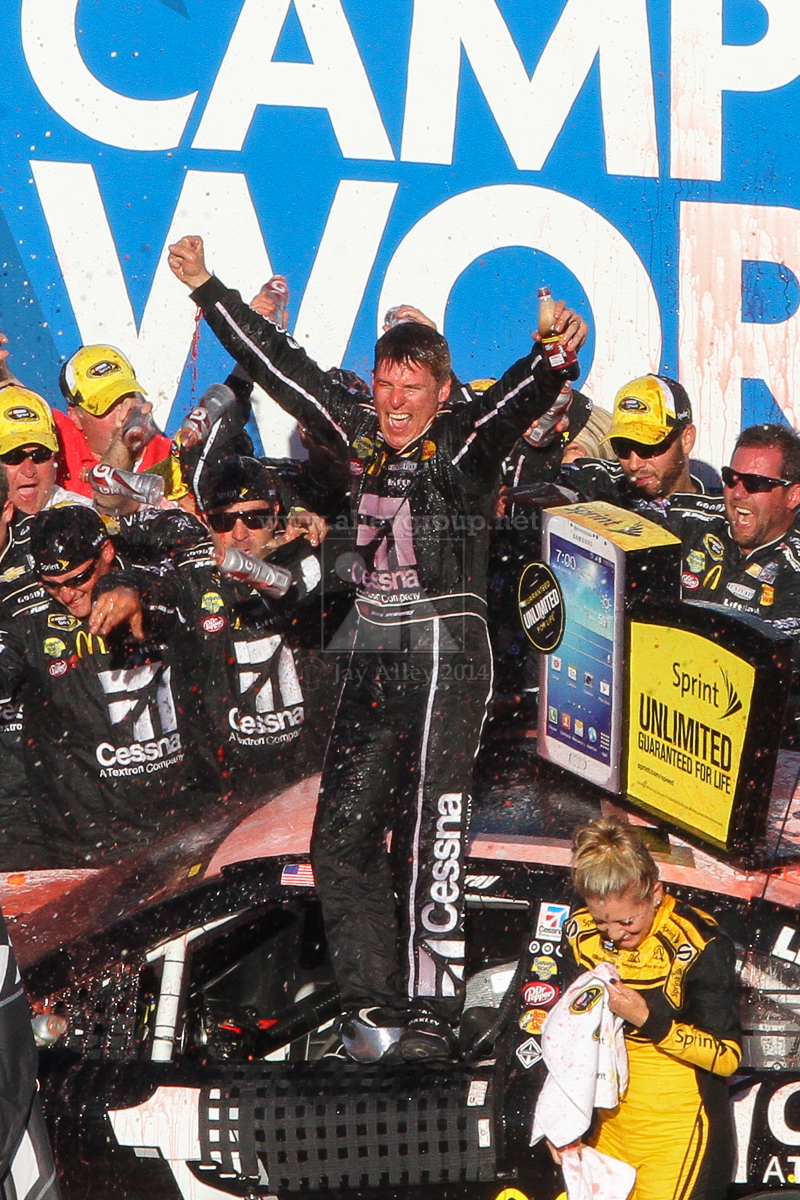 One of my favorite racing road trips every year involves trekking to Talladega Superspeedway twice a year, although I was only able to get to the spring race in 2014. It's about 500 miles from Indy and I think this track showcases what NASCAR racing is really all about: high speed competition, not the beating and banging you see so often on short tracks. I've been so fortunate to shoot for Associated Press at 'Dega and be put in positions to shoot exciting finishes, crashes, side by side racing and Victory Lane from high above the track. Many times, I have been positioned at the top of the highest grandstand on the tri-oval with along telephoto where I can see the whole track. From that vantage point, even Talladega looks like a short track and I can shoot Victory Lane celebrations from a true bird's eye view. I took this shot of Jamie McMurray at the October 2013 Talladega race which I think captures his excitement at being an unexpected winner following a last lap crash that took out many of his prime competitors. More than a race indeed.

Living in Indianapolis means being close to one of the greatest racetracks in the world, the Indianapolis Motor Speedway, which has featured many new events the last few years. It's really a shame that the sports cars are not racing there again so this shot from the GrandAm race at Indy in 2013 has special significance for me. I was shooting for motorsport.com that race and as the winning cars came to a stop on the front stretch, I went out on the racing surface with other photographers and managed to get this shot with the scoring pylon in the fading light in the background. My favorite part about this photo is the expression on the face of Alex Popow's son who no doubt will be a racer himself someday.
Joy: Day 34

The Indy 500 in 2013 was one of the most special days of my life, and I'm not talking about the photography part, although that turned out to be quite special too. Although I've been shooting the 500 since 1984, I had never had the opportunity to shoot in Victory Lane before. Seeing Tony Kanaan get his first Indy 500 win in 2013 was an unreal experience, and I hope that it was not a once in a lifetime experience. I was lucky even to be there since one of the main photographers at motorsport.com, Eric Gilbert, could not be there so I got to fill his normal role throughout the race. It was a totally chaotic scene as Tony began his celebration with the traditional bottle of milk as team owner Jimmy Vasser (in the white shirt with arms raised in the foreground) put an effective block on most of the photographers which prevented them from getting shots of the initial celebratory moments. I was lucky that my assigned position on the photographers' riser allowed me to get a somewhat clear photo, as people were yelling at Jimmy to get out of the way. The end result was the whole milk celebration got restaged but I got the photos I wanted the first time around.
Joy: Day 35

Fast forward one year to Indianapolis in 2014 and another first time Indy 500 winner went to Victory Lane: Ryan Hunter-Reay. This year I swapped positions with another motorsport.com photographer and had to try and get photos of Victory Lane from ground level alongside the area where they stage the winner's celebration rather than on the photographers' riser as I had in 2013. That turned out to be quite a challenge but it was another photography situation where being tall and having long arms paid off as I was able to shoot over the assembled masses and get this photo of the joyous winner. That is Ryan's wife Becky in the foreground with her arms also raised and a lucky charm dangling from her right hand. In most years at Indy, I have to try and grab Victory Lane photos from the grandstands through a very narrow window between the podium and the photographers' riser so even though my access in 2014 wasn't the best, it was still better than most years. I still made some pictures so I was happy too. That's what I do, and it's a blessing to have these opportunities, memories of which will last a lifetime for me.