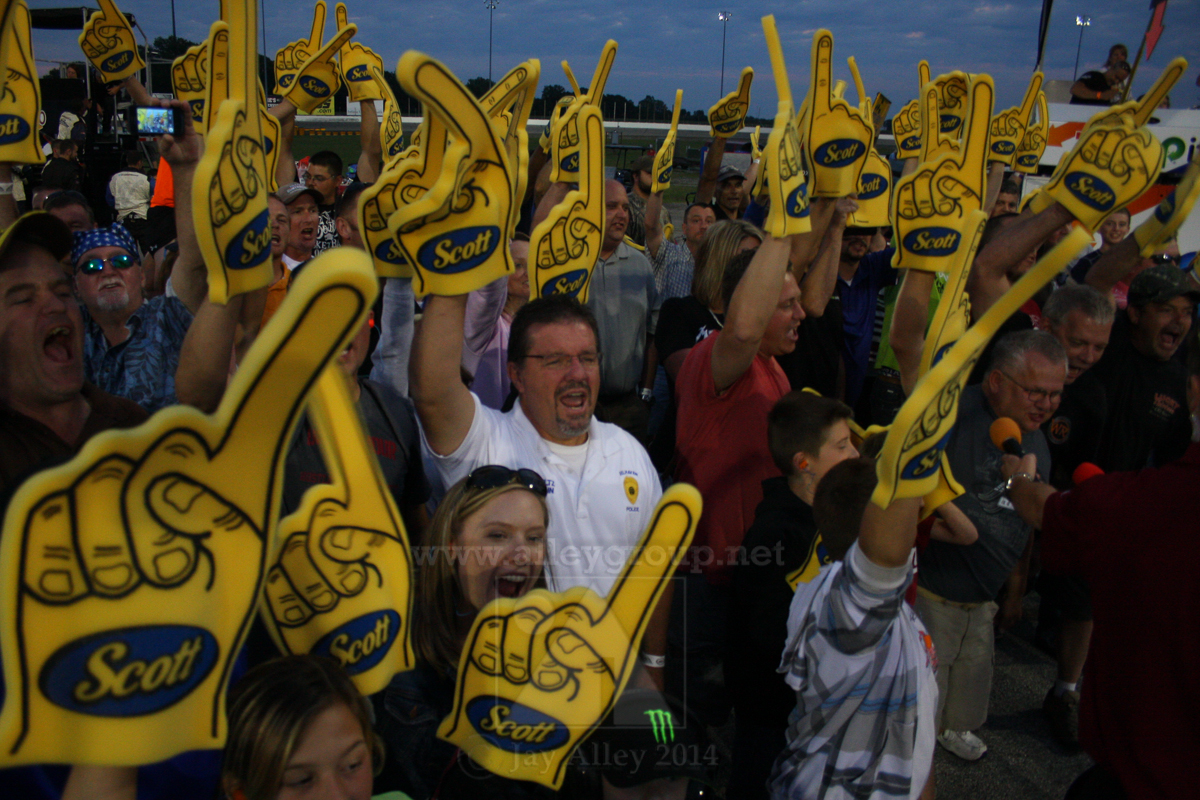 Racers would race without fans, but there would be no sport without them. And the future of racing begins with kids - not just the ones running quarter midgets or go karts - but those who get dragged to an event and then fall in love with the sport as I did at an early age. The sounds, smells, emotion and sensory overload that fans experience at races are what keeps them coming back and what better way to ensure the future of motorsports than to start them young? That is why I chose the theme of "Fans" for the final week of my personal 42 Day Photo Challenge and as it turned out, all the photos feature kids at racetracks. What's not to love? After cycling through weekly themes of Fire, Air, Water, Earth and Joy, ending my challenge with Fans seemed only natural since fans are the backbone of racing. Now I need another photo challenge since it is the offseason for most racing although I am looking forward to 2015 and what the future may hold for me in the sport. After all, I started as a fan with a camera and became a photographer. 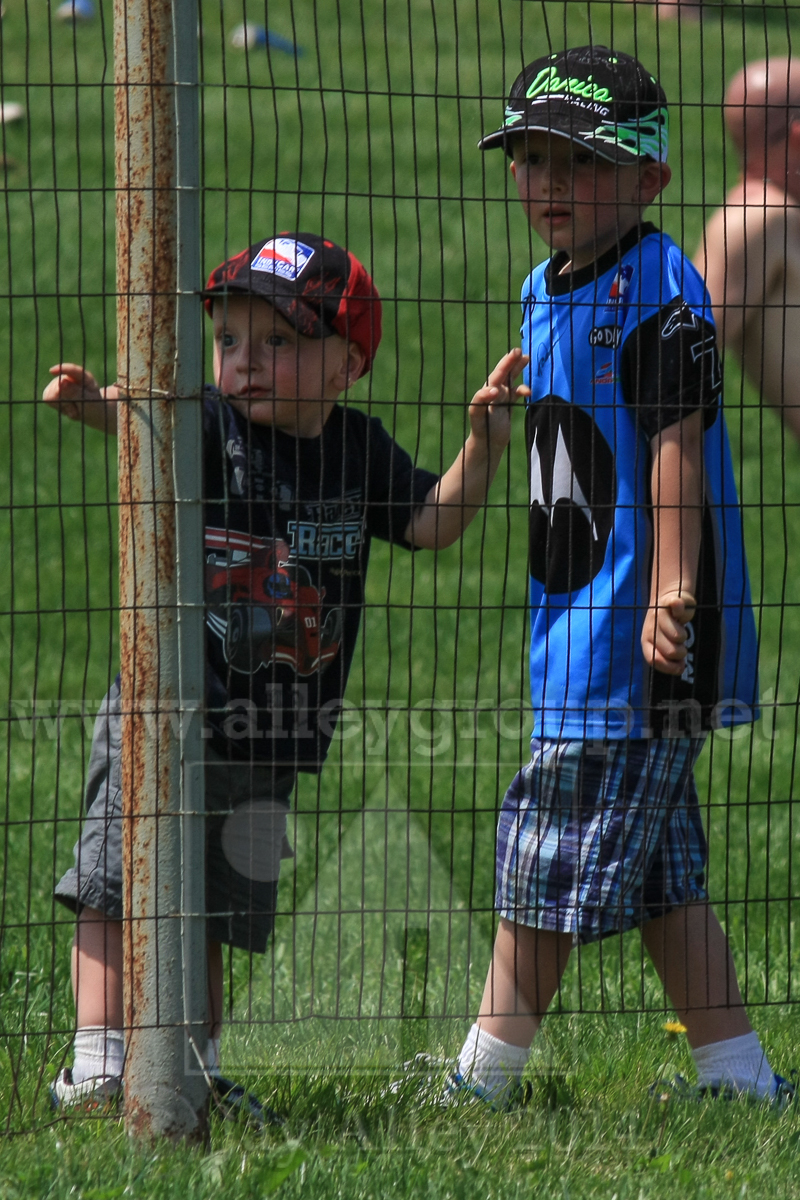 These boys caught my eye at Indianapolis in 2010 when I was shooting The Indy 500 in Turn 3. The area behind the photographers in 3 is a long spectator mound where fans gather with their families and watch the race while lounging on blankets or kicking back in bag chairs. The area behind the mound is a whole different story as that is where the "Snake Pit" has moved, full of college kids and hard core partiers who come for the infield show and mostly don't care who wins the 500. I had selected quite a few photos of the party crowd to use in my theme this week, but decided against it the more I looked at my older images. The party crowd comes and goes, but these boys are all in and I loved that. I am guessing they are brothers and by the looks on their faces, they are amazed at what they are seeing, with the younger boy pointing out something exciting while the older boy is decked out in Danica gear he must have gotten in 2008 when she was running the Motorola colors. I don't know what happened to these boys the rest of that race day as things got really busy for me later when Mike Conway crashed on the last lap, but I would bet that Indy 500 experience was enough to make them fans for life.

This photo was not actually taken at a race track, but it was taken during Indy 500 related activities in 2010. I had gone to the Convention Center downtown to pick up a 500 Festival Mini Marathon packet for a friend and noticed Danica's GoDaddy show car being lovingly admired by this young man. As I shot a few frames, I could see he was talking to himself as he first felt the Firestone tires, then the sidepod of the car and then finally looked inside the cockpit. I have wondered what he was telling himself that day, but I'll bet he's been to the 500 since then! 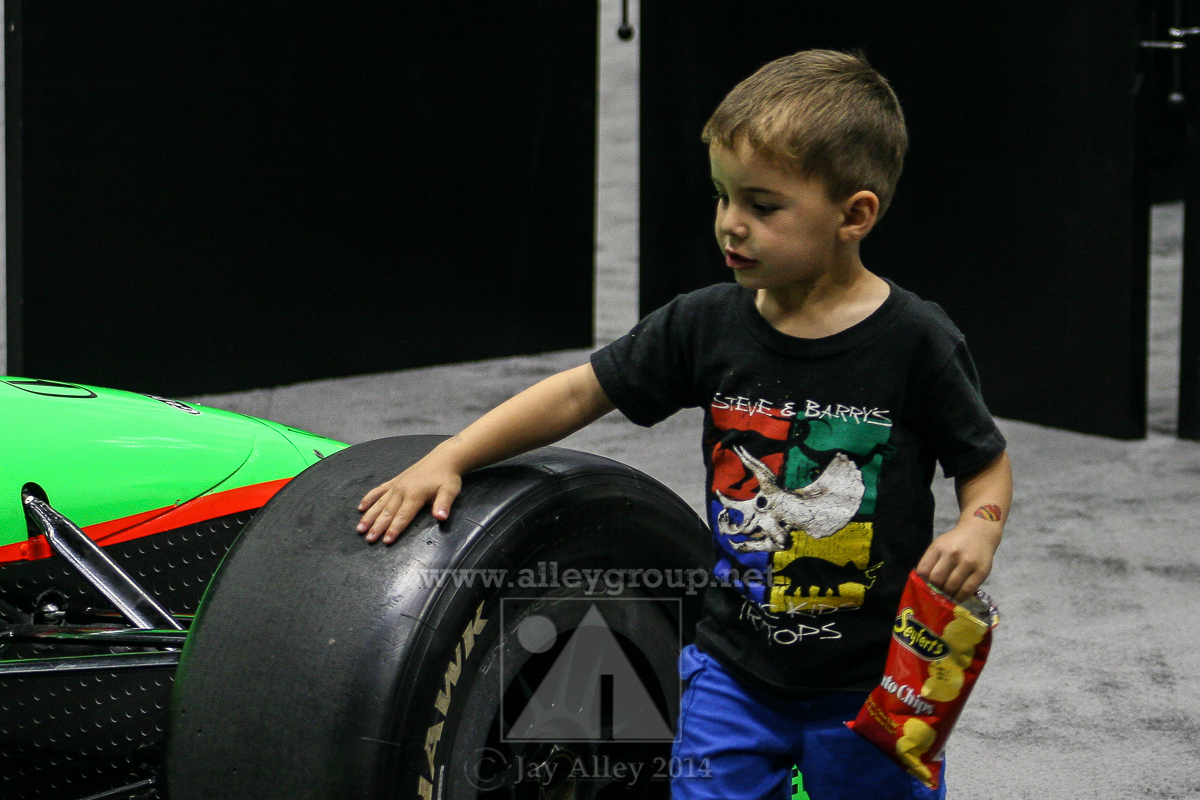 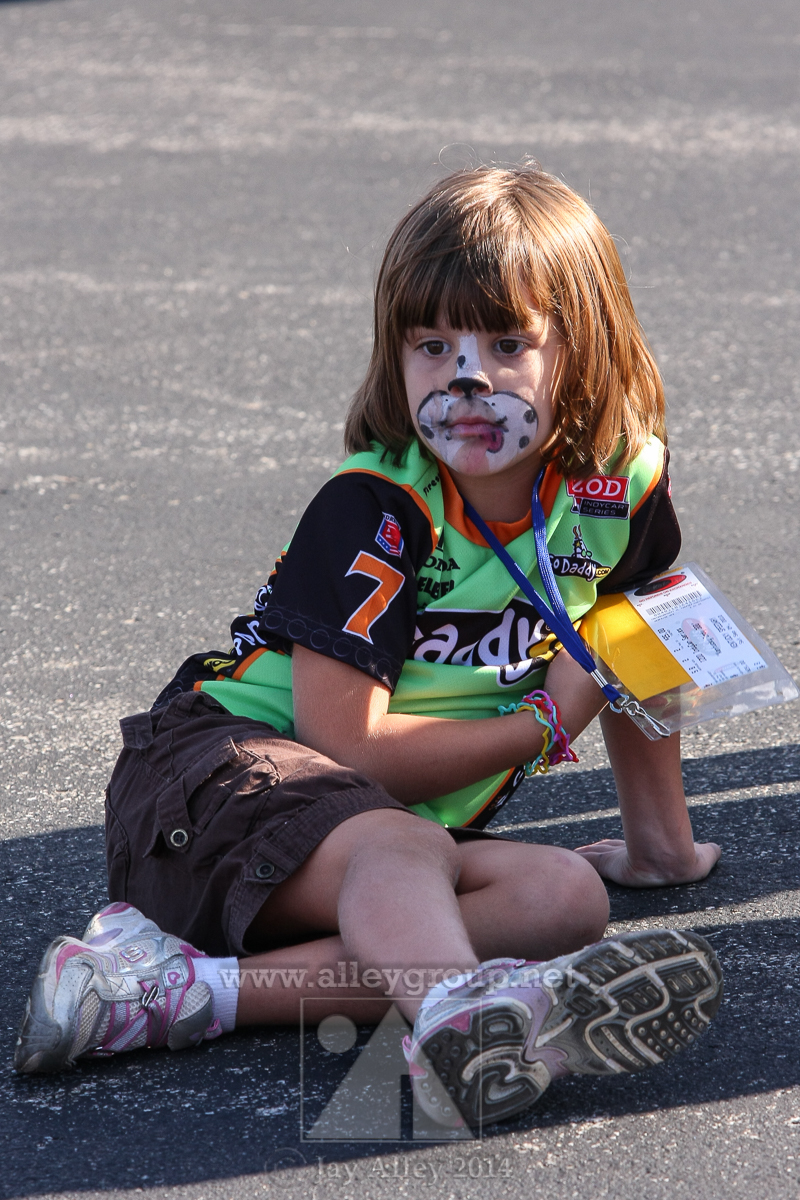 Without intending to, these first three days of this theme have revolved around Danica Patrick. She took the Indycar series by storm and did so much to galvanize fan support during her years in the series. This young lady might not even have known about Danica's Indycar exploits as she waited on her parents at the Atlanta NASCAR race in 2010, wearing face paint and her Danica GoDaddy attire from her first year racing stock cars in the Nationwide Series. The faraway look on her face is what caught my attention and I hope she is still a race fan now, more than four years after I took this shot. 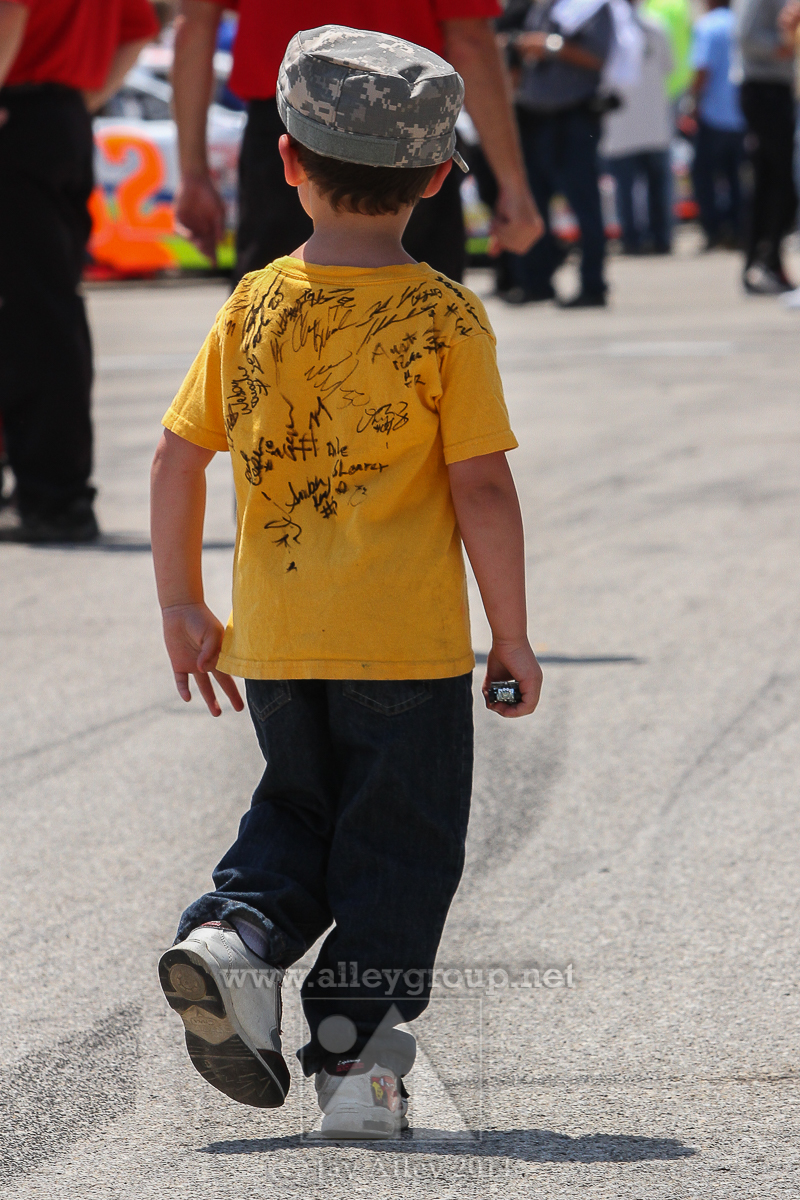 I took this photo of a young boy in an autograph-covered T-shirt in 2012 at the ARCA race at Winchester Speedway during the pre-race autograph session. He was walking down the front stretch with his father and watching the crowd go from driver to driver. The T-shirt grabbed me at first but then I noticed he had a die cast race car in his right hand which made the picture for me. One of the things that ARCA does best is get fans up close and personal with their drivers during these autograph sessions, and I am always on the lookout for photos featuring kids like this one. I was shooting for ARCA that race weekend and I have often wondered if this boy's parents bought a copy of this photo from the ARCA website as a keepsake to go along with the autographs and hero cards this young man collected that day.

Kids playing with race cars at race tracks is a common scene but I like this photo because it was both a boy and a girl having an imaginary race on the asphalt behind pit lane at Indianapolis during 500 practice in May 2013. I'm sure they had just purchased their Indycar die cast cars and with the sounds of practice all around them at the Speedway, they did what comes naturally for kids: they played. 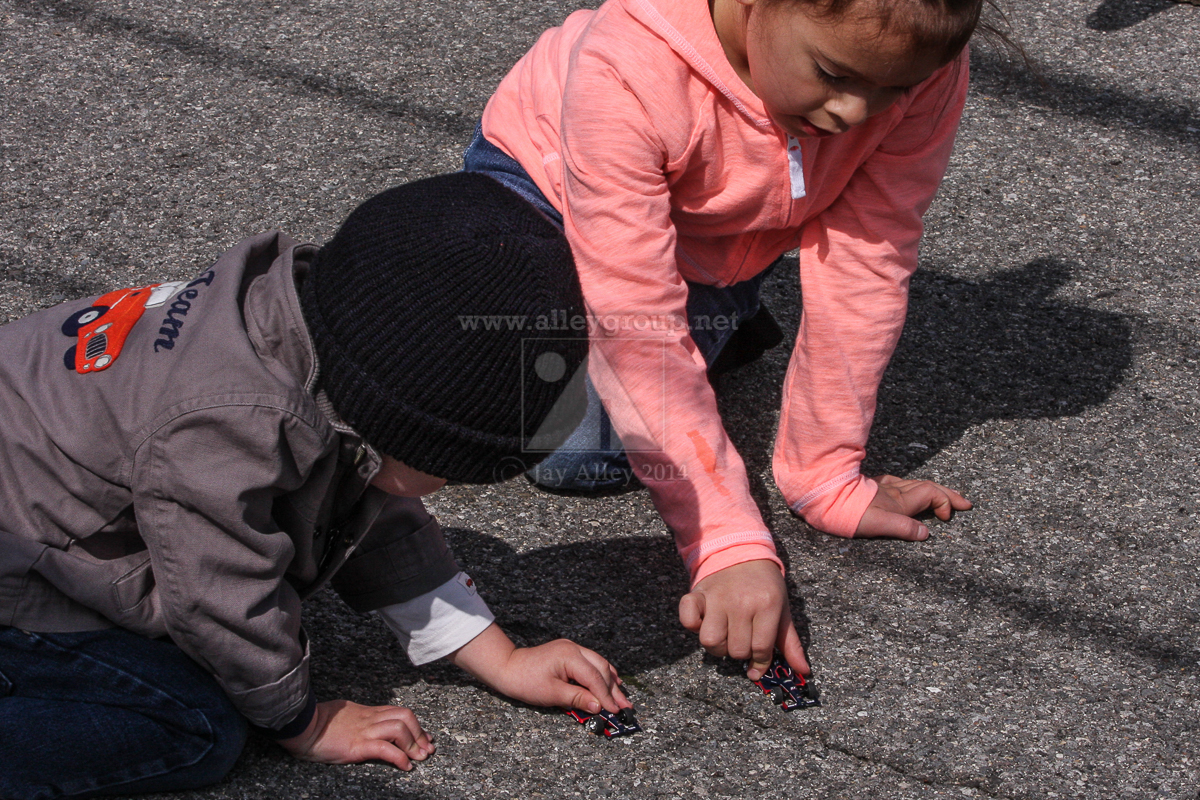 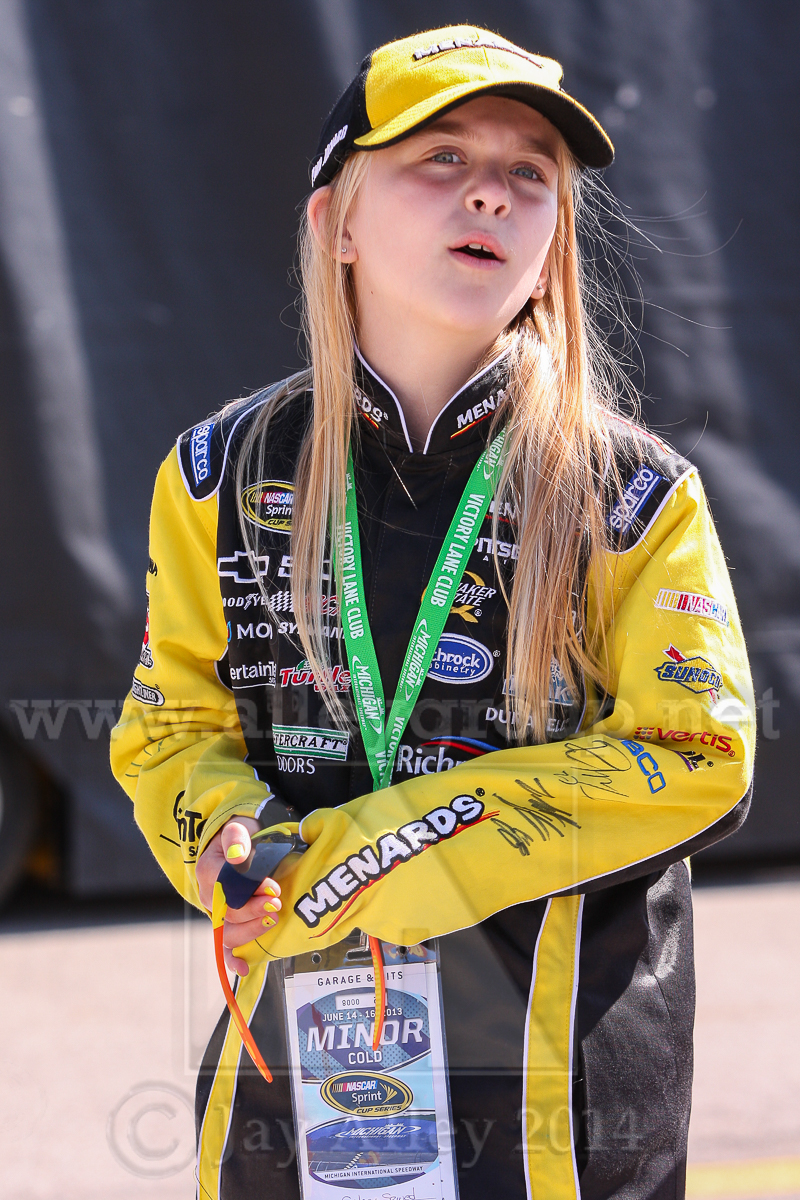 This girl in full Menards regalia is another photo from 2013 and I took it at Michigan International Speedway while I was shooting for ARCA. I don't know her story but I have seen her at other ARCA races since I took this shot, so she's either the biggest Frank Kimmel fan in the world or has some family connection to a race team or Menards, Frank's sponsor and the title sponsor for the ARCA series. Maybe its as simple as her favorite colors being yellow and black and she just likes the race swag, but my guess is we will see her again at the races, either as a fan, or maybe as an engineer or crew chief, or behind the wheel as a driver.

My final photo in my "Fans" theme, and in my 42 Day Challenge, is also from the ARCA weekend at Winchester in 2012. The message on his T-shirt says it all for those of us here in USAC country:  "I'm gonna be a non wing sprint car driver." He's clutching hero cards from ARCA drivers in both hands and has started to get some autographs on his T-shirt, and I would bet that Winchester weekend was not his first race. Who knows? Maybe he will follow in the footsteps of guys like Tony Stewart, Kyle Larson, Ryan Newman, Bryan Clauson and so many others who have come from USAC and gone on to become big time race car drivers. If that does happen, I can see the day when he is telling his grandchildren "I remember being at Winchester back in 2012..." and you heard it here first. I got hooked on racing at about his age, so I suppose it's only natural that I would be drawn to kids like this at races who remind me of how exciting that was. It still is just as exciting and even though I'm just a photographer, I live for days like this at the racetrack where I can get that rush of excitement, smell the race fuel exhaust and hot tires, and do what I do: make some pictures. 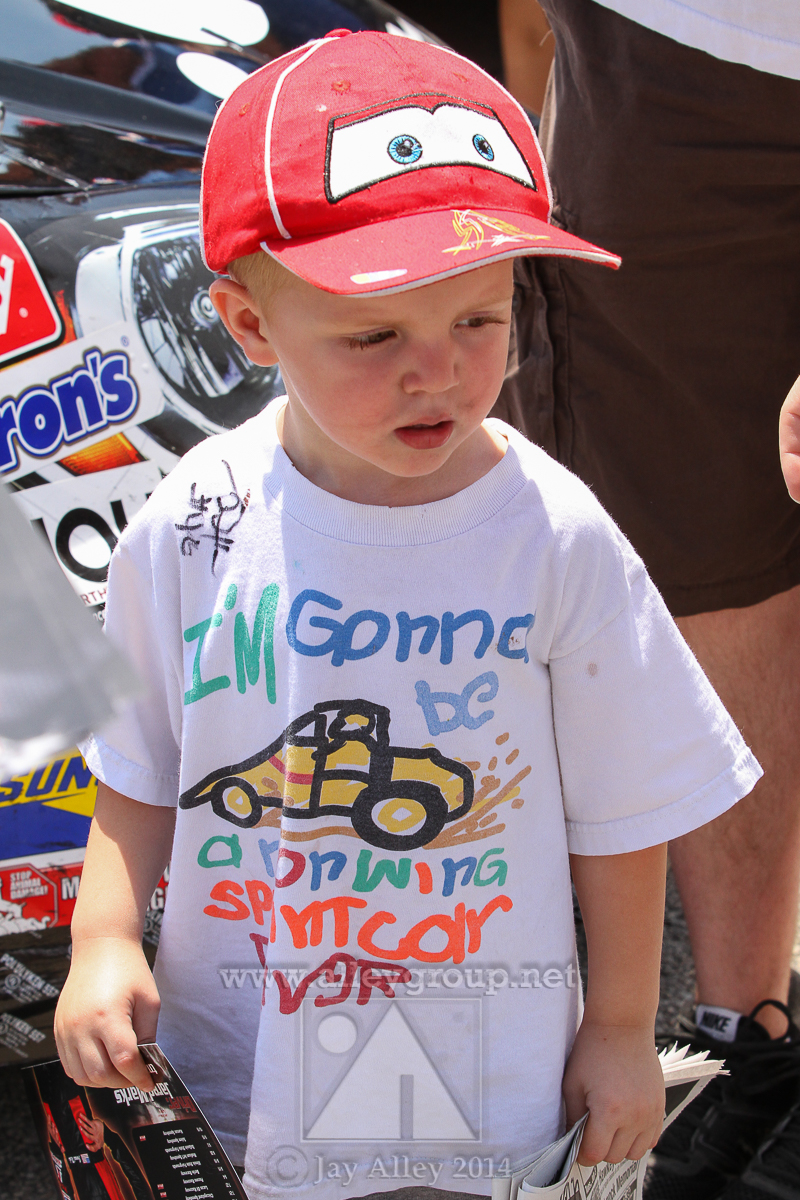