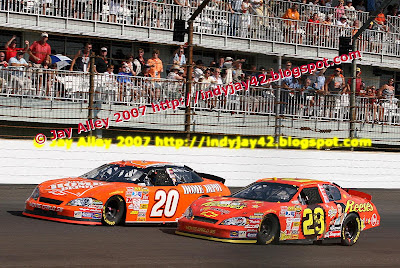 At the end of a wild day at Indianapolis, Tony Stewart got by Kevin Harvick and took his second win in the Brickyard 400. The native Hoosier managed to avoid the carnage throughout the race, as nearly half the field tried to knock down the walls. Thank goodness for the SAFER barriers. Harvick wasn't too happy about the way Tony made the winning pass and faded to 7th after taking the lead on the last restart with about 20 laps to go. My man Tony pulled out some short track magic with less than 10 laps to go with an under-over move that started in Turn 1 which Harvick couldn't match, and was finished in Turn 3 with a dandy chop down to the white line. They went past me at the beginning of the backstretch side by side, and for a moment I thought they might crash each other out and hand Montoya the win. It seemed like they were heading for a finish like Emmo and Al Jr. in the 500 in 1989, but I knew Tony wasn't going to go down without a fight and Harvick was a sitting duck as Tony clearly had the fastest car all day long.


JPM was extremely impressive too, but that's no surprise to me. He was awesome as a 500 rookie in 2000 and Juan displayed the same smooth car control in his first stock car run at Indy as he did in an Indycar. It was fun to see the crowd react to Tony's charge at the end, and Juan seemed to have a good following as well, becoming the first driver to run Indy in all three major auto races. Montoya will win on an oval sometime this year, I'm sure of it, and Tony is set to charge for another season title, having now won two in a row after being shut out the whole season prior to the last two weekends.

While the stock car brigade packed up their mangled equipment and headed off to Pocono after Indy, I'm going to Michigan for the Indycar race this weekend in what may be the last IRL race on the fast high banks for awhile. It hardly seems possible that 1981 was my first trip to MIS, and I've seen a lot of great races up there. Hopefully this weekend will follow that pattern as well.