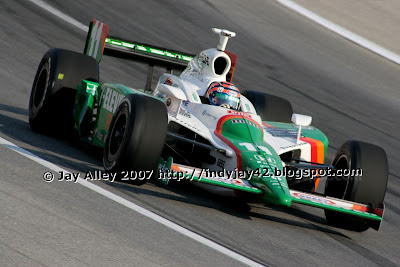 I thought Michigan was wild and crazy but last night's Indy Racing League event at Kentucky may have topped it. Darion doesn't recognize the checkers are out and gets airborne again. Danica almost hits a safety truck after blowing a tire. Helio and Kanaan bang wheels and they both escape. My man Sam spins out and takes Wheldon with him. And AJ Foyt IV was leading the race on the last restart with 10 laps to go. I never would have believed it.

But there was Kanaan, fastest all night, overtaking Foyt relatively easily in the end, to put an exclamation point on a sweltering Kentucky evening and close in on the points leaders with just three races to go. I loved every minute of it, although it seems lately like I am at the wrong place at the wrong time when the real theatrics happen. I had just shot TK crossing the start-finish line under the checkered flags and turned to head to victory lane, when I heard the crowd gasp and that distinctive "WHUMP" sound these cars make when someone hits the wall. My first thought was "goodness - the race is over and people are still crashing" and I could then see Dario sliding along the wall in Turn 1. THEN I saw the video replay on the track's big screen and OMG! Is Dario the luckiest driver around or what? He needs to go out on a boat or something for a few days, stay off the asphalt and let someone else drive him wherever he needs to go.

These last 5 weeks have been unbelievable: Nashville IRL, Mid Ohio IRL, Brickyard 400, Michigan IRL and Kentucky. I've never had a run like this in all the years I've been doing racing photography, and despite late night drives home the last two weekends, I wouldn't trade it for just about anything.

Except maybe hitting the lotto. Then I could do this every weekend!

I'll be anxiously watching the next two IRL races (Sonoma and Belle Isle in Detroit) before I get the chance to go to Chicagoland for the finale, so let's home things calm down a bit before the real money is on the line for the season title. It looks like a three man race right now between Dario, Dixon and TK so it should make for an interesting end to a crazy IRL season.

C'ya at the track! BTW - US Nationals are next up for me, so I can't wait to see the straight-liners pound some asphalt at O'Reilly Raceway Park.
Posted by Jay Alley at 12:52 PM