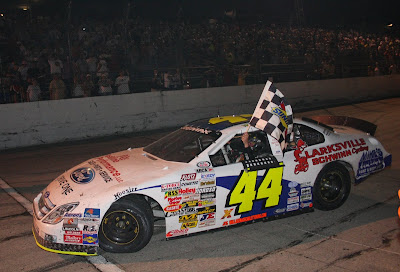 While the forecast isn't real favorable today for Salem, at least it is predicted to be warmer than last spring. I couldn't believe they got the race in last year, so I'm optimistic that it will get done this time too. Somehow. Salem king Frank Kimmel won last fall and even though he starts 11th today, he should still be the man to beat. Two rookies are on the front row for Eddie Sharp Racing, Justin Lofton on pole and Craig Goess on the outside. NASCAR vet Ken Schrader starts sixth in the 29 car field, so it will be interesting to watch as Kimmel only qualified 11th and is surely to charge to the front from the beginning. Normally just a one-stop race, the timing of the leaders' pitting can make a big difference on this fast short track where 17 second race laps are not unusual.

Congratulations to Graham Rahal for taking pole at St. Pete! Surely the weather will be better down there but he showed last year that rain or shine, he is quick. Clearly he could defend his race title from 2008. The Top 6 in final qualifying was not a big surprise, except for Dixon not even making it into the second round! Dario looks stout in his return, with Justin Wilson pulling a mild upset for Dale Coyne to start up front with Rahal. The Penske boys both made it to the Top 6 along with Tony Kanann who will likely go for it from the drop of the green flag. Mike Conway was very impressive until he bounced off of two walls at the end of the second session. Thanks to VERSUS. I enjoyed the qualifying show and they did a good job of showing the personalities in the sport, which the IRL desperately needs since once the helmets go on, it's impossible for the average fan to know who's who. And interviewing someone right after they've crashed out isn't going to allow them to put their best foot forward either!

We're off to Salem in a couple of hours and I'll be back with more later once I download eveything!