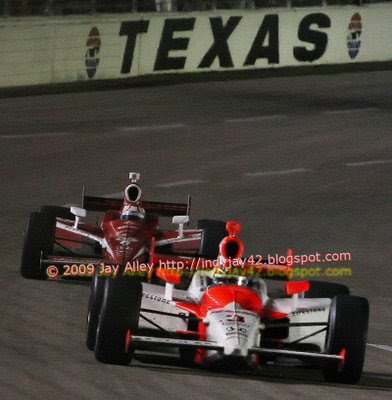 Helio Castroneves has done it again! His Penske crew got him out first on a late pit stop and he held off teammate Ryan Briscoe and the Ganassi team to take the Bombardier 500k at Texas Motor Speedway. His fence climbing routine is getting more polished every race now it seems and the Texas fans ate it up. My first visit here has been a great experience - from the hospitality at the Champions Club Marriott, to the trackside access for photography. I have to say though that I expected more side by side racing in the corners than I saw this weekend, especially when compared to past races at Texas which always seemed to end up in photo finishes. I heard someone suggest that these IRL cars are so finely tuned now that it is hard to gain an advantage. I am not a technician by any means, but I can see how that might be the case after several years with the same chassis technology. On top of that, with the sealed Honda engines being virtually identical, no one seems to have a horsepower advantage so it is all down to handling, and clearly the Penske and Ganassi teams have it figured out. Once in the lead, they are hard to catch and almost impossible to pass. At least that's what it looked like down here.
My pick for the win was Dario and he never really challenged for the top spot. Ryan Briscoe appeared to be cruising for most of the race with the lead when a caution came out for debris and they brought out the sweeper trucks. I heard from others that several drivers were complaining on their radios about how bad the marbles were late in the race, so the track probably did need to be swept. But it took Briscoe's advantage away and once Helio beat him out of the pits, that was all she wrote.
Thanks again to American Motor Journal for the chance to shoot down here. There was even a sticker on the photographer's risers in Victory Lane for us and I felt like a one man band with the opportunity to cover the race from all different angles. Shooting from the outside through small holes in the fencing was incredible as cars whipped by in packs just inches away. The lighting may look good for television and the fans at the track, but my cameras still told me it was bloody dark, so it was quite a challenge to get usable images from certain spots. That's a matter of opinion, I suppose, and I enjoy the fact that I am still learning the digital gear at every race I shoot. And even as long as I've been doing this kind of photography, I still get the adrenalin going before the start and have to take a deep breath and tell myself to calm down and go to work. When that feeling goes away, then perhaps it is time to start doing something else, but I don't see that happening anytime soon.
Y'all come back now, ya here! I know I will be back. Everything IS bigger in Texas apparently, and this race was not the best IRL race I have seen, but the venue is spectacular and they do their best at the track to give the fans their money's worth. Now it's back to Indy and then in two weeks I'll be at Mid Ohio for the Rolex Grand Am series event. See you there!
Posted by Jay Alley at 10:34 AM