ARCA ReMax Series at Salem Next; IRL Fight to Homestead 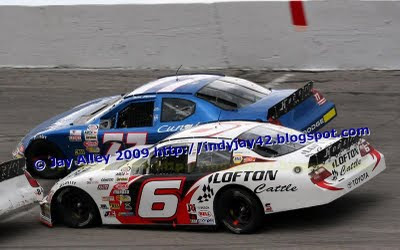 While the Indycars are halfway around the globe in Japan, I am in Indy and we are heading south to Salem Speedway today for the ARCA ReMax Series race where young guns Justin Lofton and Parker Kligerman are poised to duel for season championship honors, tied for the points lead with only two more races to go after today. The fall night race at Salem is always a treat as the beating & banging among 30 or so competitors is always entertaining. And don't count out local favorite Frank Kimmel as he has won at Salem perhaps more than any other entrant and with no real shot at the season title from third, you can bet he will go for broke tonight to get a win. This has been an awesome season for Parker who, as a Penske development driver, you just know is getting great equipment and tech support. We're planning to get there for pole qualifying so I'm looking forward to seeing how it plays out.

This is likely going to be my last race worked this season and I suppose it is appropriate that my 2009 racing season is bookended at Salem. It's a fun track to shoot with lots of side by side racing on the high banks, but it can also be quite nerve wracking working in the pits. This is especially true for the ARCA race as the curving pit lane with only one lane for outbound traffic is exceptionally tight and the pit boxes are small. There hardly seems to be any room for the teams to work, let alone for a tall guy like me to wedge myself in to get a few pictures. I really have to watch what's going on to stay out of the way and still do my job without effecting the teams.

Meanwhile in Japan, Ryan Briscoe threw away a golden opportunity to seize the series points battle, getting sideways and hitting pit wall while leading as a caution came out when all he had to do was get out cleanly and he probably had an easy win. Briscoe finished laps down after repairs and last year's history-making winner Danica was never really a factor which left the Target boys fighting it out amongst themselves for the victory. Dixon got out of the pits ahead of Dario on the last round of stops just as Hunter-Reay hit the fence to bring out the final yellow and cruised to the checkers from there. NHL teammates Rahal and Servia rounded out the top four, Mario Moraes overcame a fueling problem to take fifth and Danica wound up sixth.

So now the season points fight is tight as wet jeans going to Miami and the top three all have a realistic chance to win the title. Dixon, Dario and Briscoe now will fight over the 53 points still available for the series championship in a few weeks. I wish I could be there. Maybe next year.
Posted by Jay Alley at 10:46 AM