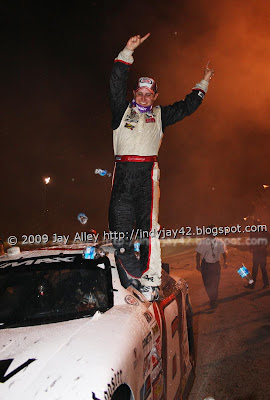 Young guns Justin Lofton and Parker Kligerman fought it out with amazing restraint and professionalism at Salem Speedway Saturday night with Lofton coming out the victor after some tense moments over the last few laps. Youth was well served on a beautiful southern Indiana night at Salem's infamous high banks as 16 year old Chris Buescher took the pole and Joey Coulter ran away with the middle third of the race before cutting a tire and finding the wall. Dakoda Armstrong came through for third. Lofton also took command of the ARCA season points lead with just two races left even though Kligerman fought back from a lap down late in the race and put on a furious challenge for the win. Lofton started the evening ahead on points by virtue of his second place starting position while Kligerman started fifth. The gap is now 25 points and the Salem finish sets up a great season ending duel in this highly competitive series. 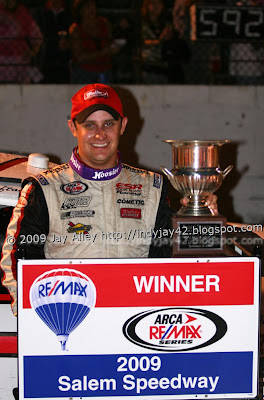 On a night when Salem honored its legacy of more than 50 years of ARCA stock car racing by saluting short track legends before the 200 lap feature, local hero Frank Kimmel ended up fourth but was never really a factor for the win. Coulter was most impressive as he had lapped everyone except Lofton by the time the last 25 laps were approaching. Lofton used a little bump & run in turns one and two to get past him and within half a lap, Coulter cut a tire and hit the turn 3 fence to end his night. Kligerman had just been lapped by Coulter a few laps before this incident so he got the lucky dog pass back onto the lead lap but he was mired behind a dozen or so lapped cars on the final restart. Amazingly, he threaded his way through the pack to find Lofton and with about 10 laps to go, he made several attempts to pass for the lead but could never quite get fully alongside Lofton. Lofton noted after the race that Kligerman could have given him the bumper and moved him out of the way, but they raced clean and hard to the checkers.

All in all, it was a very entertaining night at a legendary short track. I don't know of anything better to do on a late summer Saturday night than go short track racing, and I think the healthy crowd at the event must have felt the same way.