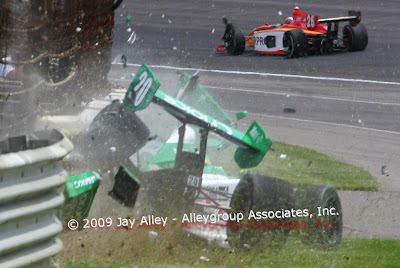 As the first decade of the 21st Century winds down this week, I am struck by a flood of memories from my fourth racing season shooting for American Motor Journal. Racing news is generally hard to come by at this time of year, and Danica seems to be the main focus of interest with her Nationwide Series deal for next year. Yes, I wrote about it here a couple of months ago long before it was confirmed and I'd still like to see her run at Salem! It was funny that after her first ARCA test at Daytona, she said the car was slow. Well yeah - compared to Indycars, of course the ARCA car is slow!

But she's not the only one in the news. Helio and his girlfriend have just had a baby. Ryan Briscoe has recently gotten married. The IRL is debating whether to go radical or traditional on its next gen chassis spec. Layoffs at IMS have stretched into marketing and PR departments. Tony Stewart was behind a growing motorsports industry show in Indy that has already booked twice as much convention floor space for next year. IZOD came on board as the IRL series sponsor. And the 2010 Indy 500 practice schedule has been cut to one week. Barely a month from now, the Rolex Series will be running the 24 Hours of Daytona and then the madness starts all over again for the various series. I can hardly wait. Please enjoy the following slide show of many of my "Best of 2009" photos from various racing series.

If you've been here before, you know my 2009 season began and ended with the ARCA races at Salem Speedway. In between April 5th and September 19th much has transpired and thousands of miles have been driven or flown chasing race cars. I've heard it said over and over: do what you love and love what you do. I've tried to incorporate that into my life as well, leaving a job I didn't enjoy in October to pursue the passions that drive me onward: photography, racing, basketball and teaching. As Joe DiMaggio said in his famous speech, "Today, I consider myself the luckiest man on the face of the earth." Believe it or not that rings true for me and I trust that the best is yet to come.
After Salem in April came the "Month of May" in Indianapolis; naturally the Indy 500 practice doesn't take a whole month anymore, but oldtimers like me still call it that. I was accepted into the Indy 500 Oldtimers Club this year and had an incredible time shooting all over the place at the track. Turn One was the busiest it's ever been in my experience, and there were days you really had to be on your toes - second day qualifying for instance, when there was a crash the second lap after the track went green in the morning practice. Lots of people got no pictures as the morning "hello, how are ya's" were still being exchanged along the fence. Not me. I got pictures. That's what I do. Then poor Vitor Meira got steamrolled during the 500 and he came down off the wall right in front of me in one of the wilder accidents I have ever photographed at Indianapolis. Indy Lights ran a highly competitive race on Carb Day and Anna Beatriz pounded the inside fence to my left in Turn One - I don't think anyone else got pictures of it as I was the last person in the row of photographers and shot through the gap in the safety fence where the crash trucks come out. The photo which leads this blog post is one of this series and is spectacular for the trash and debris thrown off in the incident.


Soon after the 500, I got to go to Texas for the IRL race for the first time. We stayed at the Champions Marriott within sight of the track. We spotted Tomas Scheckter and Mike Conway in the hot tub the day of the race while we were relaxing by the pool. It was great being there as race team personnel were all around. My brother and his son were there for the weekend and we thoroughly enjoyed the action at Texas.


Two weeks later, my assistant and I took off for Ohio and the Rolex Series at Mid Ohio Sports Car Course, which is absolutely one of my favorite race tracks for photography. From that standpoint, the racing is almost secondary, as they fill the weekend schedule with cars on track from dawn to dusk and memory cards get filled early and often. These beautiful machines sound and look wonderful on the rolling Mid Ohio course and the angles to shoot are plentiful.
Then came a couple of bonus short track races for me. First, on July 2nd, the USAC sprinters were at super-fast Winchester and put on a good show despite a short field for the pavement race. Street stocks also ran with USAC here, and I shot one of my most interesting crash shots as the driver's hands flew off the steering wall after backing hard into the inside wall coming off of Turn 2 onto the backstretch. I had my 300 on at the time, and was right next to the track so through the camera it looked like he was coming right at me. "Keep shooting" was all I could think. The following weekend, I shot the USAC sprinters at Kokomo Speedway on dirt July 12th as part of the Indiana Sprint Week tour and a huge car count meant plenty of qualifying, heat races and a highly competitive feature. I hadn't shot dirt track racing action in awhile, so it was a great refresher for my technique.


At the end of July, NASCAR came to Indy for the Brickyard 400 the last Sunday of the month. It was a boring parade as Juan Pablo Montoya had everyone covered until a bogus pit lane speeding violation took away his chances and manufactured a "race" between Jimmy Johnson and Mark Martin on the final restart. Something has to be done to make the Brickyard more exciting as the last two races have been godawful to watch and shoot, with almost no side by side racing in Turn One. Maybe I need to change locations...


The very next weekend, I was off to Kentucky for the IRL race and I had intended to go down and back in one day as I had done before. I got up that morning and saw on the IRL website that rain had effected Friday's schedule so Indy Lights and the IRL were going to all be jammed into Saturday with an earlier start. I got on my horse earlier than planned and hustled down to Sparta, where more sprinkles as I arrived jumbled the schedule further. As a result, Lights and the IRL ran back to back with essentially no practice; shooting nothing but racing was great. It reminded me of the CART 500 race at Michigan in the late '80's where Saturday was a washout and I was up cooking over a campfire Sunday morning with race cars on the track. For some reason I was not given a race mode sticker for the race so I couldn't shoot any pit action, but I still managed to get a great shot of the IRL's photo finish between Ed Carpenter and Ryan Briscoe while standing on somebody's golf cart behind the pit lane fence near Victory Lane. I got pictures again, despite less than ideal working conditions.


Continuing a hectic mid-summer schedule, I was on the road again the next weekend, heading back to Mid Ohio for the entire three-day ALMS/IRL weekend. Indy Lights were also on the schedule so the track action was non-stop and I shot more pictures that weekend than any other in my life. I even had to go back to my car Saturday morning to download memory cards to my computer after rain hit the ALMS warmup and made for very interesting shooting. I recall sitting on the photog bleachers in Victory Lane Sunday waiting for the last 10 laps of the IRL race to be completed and thinking how tired I was and that I had done a good job that weekend. I wish I knew how many miles I walked those three days at Mid Ohio. It was awesome.


With three weeks away from the track following Mid Ohio to regain a semblance of my personal life, my assistant and I then went to Chicagoland for the IRL/Indy Lights event with the feature on Saturday night another fantastic finish under the lights. This time I had the race mode sticker and got the photo finish pictures from the vantage point I wanted along pit wall. It was also the last time I saw Steve Snoddy, God rest his soul.


Back in Indy for work, I read about the scheduled Rolex test at the Speedway so I managed to get out there to shoot for a couple of hours. I was amazed by the big crowd that turned out to watch a test session for the sorts cars on a workday. The minimal publicity which preceded the test was apparently enough for thousands of gearheads like me to go racing at IMS again. It was like old home week at the track as I saw lots of my photographer friends along the fences snapping away as the test progressed. I sure hope they get an endurance race scheduled for the Rolex Series at Indy and that they run into the darkness. That would be truly spectacular.


Finally, yet it felt like it was suddenly upon me, September 19th my assistant and I went back to Salem for the ARCA night race to wrap up my season of racing. We love that place and I am thankful for the opportunity to shoot the future stars of stock car racing at this famed little track. At the spring race, I got to shake Parker Kligerman's hand before the event and to see him battling for the season title with another young gun, Justin Lofton, several months later was one of those unexpected treats that comes from racing photography.


There were poignant times this year also, with the sudden and unexpected death of photog Steve Snoddy among them. As I write this today, I am filled with gratitude for the opportunity I have had to be involved in so many great events. The people that have helped me over the years are so numerous that it would be impossible to mention them all. Folks like Don Hamilton, Penny Holder and Kevin Thorne at American Motor Journal are at the top of the list. Ron Green and Ron McQueeney at IMS are in there. Keith Pritchard, Glenn Smith and numerous other photographers are there too. Most importantly, I recognize the blessings in this life that have enabled me to travel and shoot the racing caravans of all descriptions while my life has undergone a transformation the last few years. I have not done it alone and I know the best is yet to come. God bless everyone and have a safe and happy new year! Let's go racing!
Posted by Jay Alley at 9:10 PM

Your blog keeps getting better and better! Your older articles are not as good as newer ones you have a lot more creativity and originality now keep it up!

Thank you. I appreciate the feedback very much.