Franchitti & Power Face Off At Homestead for Indycar Title 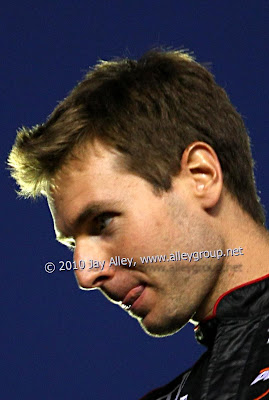 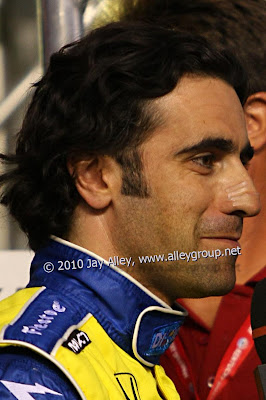 It has finally come down to this: two men and their teams face off for the 2010 IZOD Indycar season championship in the last race of the season at Homestead-Miami Speedway. In what may well be the last race ever for Indycars at this track, it is likely that the season champion will not be crowned until the last lap Saturday night. It is certainly fitting that the two most successful Indycar drivers, and teams, of 2010 go head to head for all the marbles this weekend as Dario owns the season's oval track crown and Power pocketed the road course title. Experience is clearly on Dario's side with two Indycar championships already on his resume, and Power is not known for oval track prowess. For some it may be hard to believe that the season title remains in doubt as Power had a healthy points lead just a few weeks ago. Anyone who follows Indycar racing knows, however, that points lead can evaporate in a hurry and titles are most often won on the season's last day, if not on the last lap itself, as with Dario's title in 2007.
What is hard to believe is that the season is coming to a close already and that it has been nearly seven months since the first race in Brazil. With the season opening on a street course replete with a first lap crash, the competition has been closer than ever in the penultimate season with the current Dallara chassis and multiple story lines have played out. The Penske-Ganassi feud has continued to rage for the top of the podium more often than not, with Penske drivers taking nine wins to Ganassi's five. Four women raced in the same Indy 500 for the first time ever and Mike Conway punctuated Dario's Indy win with a vicious shunt on the last lap; here's hoping he is back in a DRR machine next year. The news from Andretti Autosport has been mostly bad with the exception of Tony Kanaan's win at Iowa and the salvation of Ryan Hunter-Reay's season when additional sponsorship contributions from IZOD and others prolonged his hopes that were boosted by his Long Beach win. KV racing's season has been largely forgettable, and the repair bills for wrecked race cars must be astronomical; kudos to KV for hanging in there this season. Helio's run-in with the officials at Edmonton was memorable as was his late season comeback to climb fences at Kentucky and Japan. But the biggest story of the season has been Will Power's resurrection following a major back injury at Sonoma a year ago. He has shown dominance and extreme savvy on the road and street circuits, and his pace generally couldn't be matched on the twisty-bit circuits whether qualifying or race trim was involved. With his best ever showing on an oval recently, he seems to have new confidence heading into the season finale but one good oval race does not a season champion make. Dario's measured run to second in the standings has been inexorable and as much as I would love to see Power finish his fairy tale comeback season with the series title, my guess is that this one will go to the red and white Target boys again with Dario going all out for pole, leading the most laps and taking the race win to ensure the title is his no matter what the Penske team does to support Power's push for the top of the ladder Saturday night.
On a personal note, my Indycar season didn't pan out quite the way I had hoped last winter as I missed Mid Ohio and Chicagoland with credential difficulties. Nonetheless, I've been able to shoot several other races in a variety of series, the couch racing has been exciting and enjoyable, and shooting the races I did make has provided plenty of material for this blog, my website and my page on American Motor Journal. I have also recently taken the plunge into Twitter and am really enjoying following drivers in the series as they go about their business and the reporting of others who are journalists or fans of the fastest series in the world. So my racing season has wound down, just as it has for the Indycars. Gotta love it, no matter what!
Is it May yet?
Posted by Jay Alley at 7:58 PM