IRL Tussle at The Glen - Nashville Concrete Next 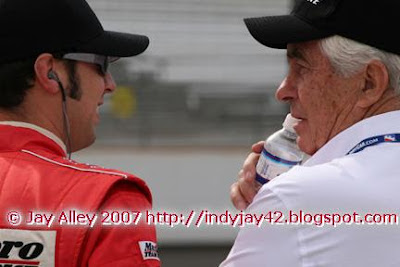 While this picture was taken at Indy in 2006, I can imagine the Captain has had a similar huddle with his star driver Sam Hornish, Jr., after all the fuss at the Glen this weekend. Too bad for Helio that he couldn't have been more patient and tried to work on the car some more but he never made it to his last two stops and mirror-driving led him into the tire wall. Of Course Scotty D was the beneficiary and with Sam driving with gusto barging past TK with a bump & run move suitable for the fendered series, my man had his best ever IRL road course finish. Now if they can just keep Sam Senior out of harm's way, everyone might not be happy but at least we won't have any wrestling matches breaking out at a perfectly good race!

Naturally there are some who might say that any publicity is good publicity, so I wonder how the shoving match played out nationally. In Indy it was big news as one might expect, and after the Danica-Wheldon "discussion" at Milwaukee earlier this year, it's clear that tempers are short with so much at stake. I'd like to know who the AGR guy was who cold cocked Sam Sr. from behind though; I'm sure Mr. Barnhart knows and will deal with it appropriately before Nashville this Saturday night. While I could not get to the Glen, I will be in Nashville this weekend and hope that cooler heads prevail on the quick concrete there. Nashville Superspeedway is a great little race track and I am looking forward to getting back there this year. Pick up a copy of American Motor Journal at your local race track and look for my race photos there. I'll be posting others here and on my photo page at http://www.flickr.com/photos/indyjay42as well.

BTW - is it just me, or are there more marbles on the race tracks than ever before? It could help explain some of the one-groove racing we've seen at IRL events this year, and why the only people I can remember spinning were rookies at Indy (Giebler and Duno) and vets on cold tires at Iowa (Wheldon and Kanaan). Every other oval track wallbanger I can recall has been where someone got high in the toolies and pushed up into the fence. If Firestone can overcome this marbling and we can get back to more of the side-by-side battles the IRL is known for, this fan and photographer will be one happy camper. Either that or they need to take some of the downforce out of the cars so the tracks aren't acting like cheese graters and chewing up the tires so much. But what do I know? I'm just a hoosier.