More Tales From the Ville - Simmons Out at Rahal Letterman 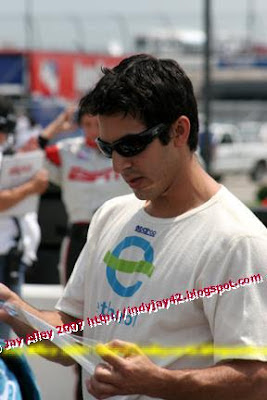 On the road back from Nashville last weekend, I had lots of time to think about where this whole blog thing started: towns ending in -ville in Indiana. And I was struck that Hoosiers aren't the only ones so inclined in naming their towns. Along I-65 in Kentucky of course there's Louisville, but there's also Munfordville, Bonnieville (must be a pretty place), and Shepherdsville for starters. But the most interesting town name I encountered on the trip was "Halfway", Kentucky on US 231. Halfway to where is anyone's guess but it must have meant something to someone once upon a time.


Now as I prepare to go to Mid Ohio again for this weekend's IRL road race, the silly season news is kicking off with the firing of Jeff Simmons who is to be replaced at Rahal Letterman by Ryan Hunter-Reay. Too bad for Jeff but he just wrecked too often, and could have been seriously hurt at Nashville after overshooting the warmup lane and sliding up into Kosuke. This picture of Jeff was taken prior to the race Sunday and Jeff seems to have his hands full with silly putty or something stringy as introductions were about to start. I think he already knew this was going to be his last race and he was just trying to hard for a good finish. Maybe he can latch on with another series and find his way back to Indy someday.
Hopefully I'll be able to post from the media center again this weekend, or at least from the hotel Saturday night after the American LeMans Series Race so come on back. I would have to say that Scott Dixon is the man to beat again this weekend, and I look forward to seeing the open wheelers run at Mid Ohio again for the first time under the IRL banner, and my first time since before the IRL-CART split. So it will be good to be back. See you in the esses!
Jay
www.flickr.com/photos/indyjay42/
Posted by Jay Alley at 10:15 PM