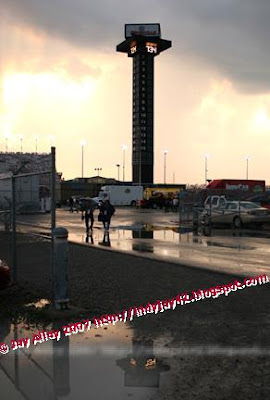 Writing this morning from the Nashville Superspeedway media center after a very soggy Saturday evening. The IRL pre-race preliminaries were all done and the drivers were ready to climb in their cars when the heavens opened up. An hour or so later, the track was almost dry but the skies opened up for good and forced everyone to wait until today for the big show.

The Indy Pro Series race was won by rookie Robbie Pecorari after six contenders were taken out in two separate multi-car wrecks. Race leader at the time (and season points leader) Alex Lloyd ran over debris from the second accident and needed a new nose cone to repair the damage, or he would have probably won again to continue his dominance for the season.

I am disappointed not to get to shoot the Indycars under the lights this year, but it should be a good, fast race today and I am excited to be here. Of course, I am pulling for Sam Hornish again, but I think the Andretti Green guys are going to be tough to beat. Danica could come through for her first win, although she isn't starting up front. I think it will come down to Franchitti and Kanaan at the end, as this track is tough to pass on and marbles may be a factor as the backmarkers have to move up high to let the faster cars through on the preferred bottom groove. I'll be busy from start to finish so I'll be back again soon.