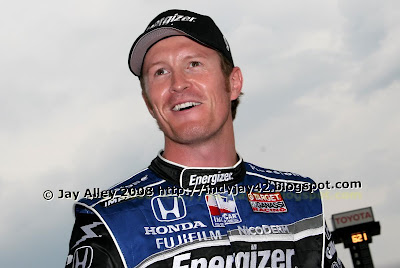 Now the IRL braintrust can focus on St. Pete, since the first race under the unified league banner went off as well as could be expected. Many commented that the new teams were happy to go home (mostly) with their cars still in one piece, and it was clear from watching the race on ESPN2 that the returning IRL teams had what the late Mark Donahue always sought: an unfair advantage - in this case it was sheer familiarity with equipment.

The video of Tony Kanaan all locked up trying to avoid the spinning car of newcomer Ernesto Viso was incredible and I really felt bad for Tony, who I had called for the race win and who appeared to have it in the bag after the last round of pit stops. And that after he escaped a wheel banging incident with his buddy Helio early on! THAT was close!

So Dixon got a gift win and finished where he started: P1. I was really impressed with Marco's run in the lead most of the night, and he may have the oval track handling figured out after all. The Vision guys charged back into the top 10 after getting their qualifying marks DQ'd for tech violations which wiped out their top 3 starting spots and they had to start from the back.

I was most impressed with the way the returning IRL guys handled the debut for the new Champ Car teams: very gracious comments and some of the most professional driving I have seen in years. I still think the new teams will be strong by the time the 500 rolls around 8 weeks from today once they've run a few thousand miles during May. The fact that Tony George paired up experienced IRL teams with the new guys was a true racer's gesture. Now the rumors that Direct TV will sign on as a series sponsor for 2009 could pump new excitement into a series which has been largely overlooked by the masses since the IRL first began racing in 1996. Thank goodness.

Maybe now fans will get the idea that this is still the most exciting racing on the planet for close competition and wheel to wheel action. I sure hope so. These guys are the fastest show on wheels and can win fans back with more performances like last night. But watch out for the Champ Car guys this weekend at St. Pete: drivers can overcome equipment gremlins better on a street course than about anywhere else so I think Power, Wilson, Servia et al will make this the most spectacular St. Pete event yet.

But I'm still pulling for TK. Helio, Dixon, Marco and Wheldon will be close behind. See ya!
Posted by Jay Alley at 9:09 PM

Hello. This post is likeable, and your blog is very interesting, congratulations :-). I will add in my blogroll =). If possible gives a last there on my blog, it is about the Wireless, I hope you enjoy. The address is http://wireless-brasil.blogspot.com. A hug.