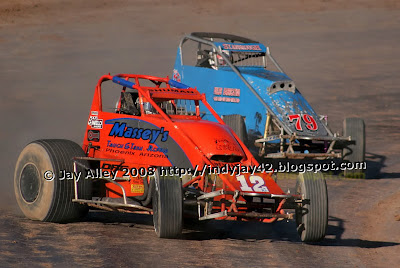 And my racing season finally gets underway! Woooo racin'!

While everyone else has been running round and round since Daytona, I finally get to hit the road this weekend and watch the slideways brigade on the storied Eldora track that my man Tony Stewart owns. It will be my first visit after a couple of aborted (or washed out) attempts, and I hope to see the USAC sprint cars run at several tracks this spring and summer. It will help balance out my photo work for American Motor Journal (AMJ) and give me the opportunity to really get back to some roots racing, as I shot loads of sprints and midget races in the 90's. It should be a blast.

Then next weekend it's back to the Salem Speedway high banks for the ARCA show where I'll get to do double duty for AMJ and work on a feature with AMJ publisher Don Hamilton for Stock Car Racing magazine. Salem is fast becoming one of my favorite tracks as it is easy to shoot from a variety of vantage points without walking miles and miles like at many of the bigger ovals. Pit road is kind of insane though, as there is barely room for the cars pitting and the entry road between the walls. The ARCA guys run a variety of lines and it's all easy to see from the infield. Standing on the pit wall between Turns 1 & 2, you can almost see the whole track except where the timing and scoring stand blocks the view. It would be nice if they got a scoring pylon though, since their top 5 scoreboard on the backstretch is impossible to see from most vantage points. With earplugs in, forget about hearing the PA system when the cars are at speed! For the ARCA race, I always try to find out from a team member when they plan to pit since it's usually a one-stop race and filled with cautions.

Then I wrap up April at Winchester for the CRA Super Series tandem with USAC sprints again, this time on pavement. The following weekend, the Indianapolis Motor Speedway opens for Indy 500 practice, so the next seven weeks you should hear (and see) a lot from me as my memory cards get repeatedly filled and emptied. Another few thousand images or so will add nicely to the collection.