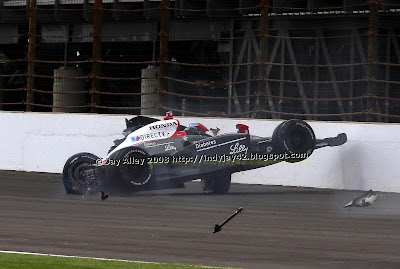 If anyone needed more rationale for why unification in Indycars is the best thing that's happened for open wheel racing in America in decades, today's action on Bump Day at Indy should be enough. It certainly lived up to its name and the drama was there right up to the 6 o'clock closing gun, just like it used to be. The roller coaster began at noon when AJ Foyt IV qualified to knock Marty Roth out. This is all from memory so bear with me for a moment. Around 3, Foyt had a scary crash in Turn 3 when the fuel cover came off and a fireball erupted as he spun into the wall - he actually seemed to accelerate as he slid backwards into the wall. My full sequence lasted over 50 images on my Canon 40D and he nearly flipped over as he slid through the north short chute. American Motor Journal will get the best of my shots for their next edition where I'll be covering the 500 from all angles.
Then Lazier got bumped by Roth. Mario Dominguez got in. Yasakawa was out. Then Yasakawa tried twice to get back in sandwiched around an awesome run by Buddy Lazier to put Dominguez out and put Roth back on the hot seat. With about 3 minutes before Bump Day qualifying was to end, Dominguez made a last run but crashed entering Turn 1 on his second lap after he had run a 219.7 on his first lap that would have put Roth on the sidelines. What a day. What a week. When I get some more time this week, I'll put more pix from the first two weeks on my picasa site, but for now, my feet hurt and I've got to get back to the real working world tomorrow, so this post will be brief.
Everyone seems to love lists, and here are a few items I thought of today while standing and watching lap after lap in Turn 3:
Best Decision: Marty Roth hiring John Andretti for his experience and setup savvy. No way Roth finds the 219's he ran today without John's help.
Worst Month of May: tie - Mario Dominguez and AJ Foyt IV. Mario for his three crashes and AJ for his struggles throughout qualifying and then wadding up a good race car after a mechanical failure.
Best Paint Jobs: Both of the KV Racing cars had gorgeous paint schemes and Powers looked best in green and yellow.
Worst Paint Jobs: All the white cars, especially Graham Rahal's. These cars just disappear against the white walls in photos when it's bright and sunny.
Worst Deal: Sarah Fisher's phantom sponsorships. Fans were giving her checks to help with costs but those firms that promised the moon should get sent into orbit.
Most Impressive: Graham Rahal. He could be rookie of the year and he seemed to learn every time out, and was fearless in attacking the track no matter what the conditions were. Vitor Meira and the Dreyer Reinbold teams were also impressive, but they had the advantage of familiarity with equipment.
Worst Luck: Chuck Buckman of Dale Coyne's team - wrong place, wrong time. Get well soon.
Shortest Month: Phil Giebler. he got on the track for the first time during Saturday morning's practice in a year-old Panoz and was in the hospital by 4:30 that afternoon.
Most Resilient: The IMS SAFER barriers. A dozen crashes and still standing, albeit dented.
Heartbreak Award: Mario Dominguez. The Bump Day mantra is crash, get in or go home. He crashed.
Happiest Driver: Buddy Lazier. He ran faster in the last 30 minutes than he had since he first turned a wheel Friday May 16th. They went to the garage before 5 today and came back to run two banzai qualifying attempts to put it in the show. Great Job for the Hemelgarn Johns on bunch.
Now the Speedway is quiet until Friday for the Indycars. It's one thing to get in the race. It's another thing entirely to race to win. Back with more soon.
Posted by Jay Alley at 10:16 PM