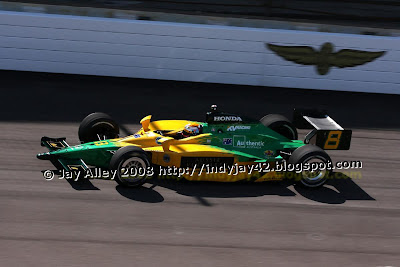 It would be hard to believe that there could be a better opening day at the Indianapolis Motor Speedway than we had today. Not a cloud in the sky all day and the temperature was just right. I've seen snow on opening day before but this year we had some beautiful Tony Hulman weather for one of the most active opening days in years. Australian Will Power was first on the track and almost all of the new rookie class hit the bricks before the day was over, plus veteran Max Papis warmed up for a refresher course. No one had any problems getting up to speed and the day went off without incident - no spins and no contact with the walls. I'm sure all of the new teams are breathing a sigh of relief. They all got valuable track time with roughly 600 laps run on the day.

Driving home when the track closed at 5, I felt like I was in some kind of time warp. The names at IMS today were legendary: Foyt, nearly the whole Unser clan, Rick Mears, Johnny Rutherford. The Andretti name was represented with Michael on pit road watching over Hideki Mutoh's rookie runs. Two Rahals were out: overseeing Ryan Hunter-Reay's orientation, father Bobby was managing his team and probably taking a peek now and then as his son Graham was working his way up the speed ladder. Add in the other new guys - Wilson, Servia, Viso, Bernoldi, Lloyd, Howard and Camara- and I counted 12 drivers that got acclimated today. Monday is expected to be almost a carbon copy of today's weather and I'm sure the remaining drivers will pass their rookie tests with room to spare. Then they can push the button as hard as they want and be ready for the veterans to join the newcomers on Tuesday when the track is open to all participants.

It was chilly this morning when I got to the Speedway around 10:30 but the methanol has rarely smelled sweeter. Lots of folks in checkered attire as I expected and other memorable scenes which are quintessential Indy in the spring: gorgeous blue Indiana sky as a backdrop for the Pagoda tower and the Borg Warner trophy, railbirds seeking autographs behind pit lane, and the "Alley Cats" manning their post at the entrance to Gasoline Alley like they will all month long. I spent a couple of hours shooting from the inside of Turn 1 which now looks totally different since IMS added the new infield turns for the Moto GP track. It's actually a pleasant place to shoot now with great visibility all the way back to the end of the Tower Terrace stands at the entrance to Turn 1. The slots in the fence were even at the right height! The strangest sight involves the creek: it's gone, and the new catch fencing on the inside is extremely close to the warmup lane for pit exit. It's going to be an awesome place to shoot on race day for the start.

I'll be back out again Monday but probably not until late in the afternoon. I do have to work to feed my racing habit, you know. Until next time, here's a link to several pix from today's wonderful Opening Day at Indy.