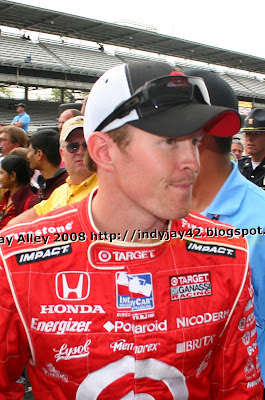 For the third day out of the last five, rain has completely wiped out track activities at the Indianapolis Motor Speedway. Counting Friday's rain-shortened session, rain has cut more than half of the week's track time. For those who qualified yesterday and were going to take today off anyway, it's no big deal. But everyone else now has to wait until Wednesday to try and get ready for an even bigger task this Saturday, when qualifying will resume again with the remaining 22 spots up for grabs. Then the real bumping will begin. If the weather cooperates, it should be fun.

Speaking of fun, I've had more fun at the Speedway this week than I can remember in years. The freedom I've had this year through the American Motor Journal to cover all aspects of race preparation has enabled me to shoot from a variety of locations. I've been able to get loads of people shots, which was just about impossible as a turn shooter, and I've been where I needed to be to cover the story of Indy. For example, this picture of Scott Dixon was taken as they escorted him from pit road to the ceremony area after the pole runs were completed and the masses were all around us. This is why I shoot races - to be part of it, and not just a spectator.

I got another example on Friday morning when I was walking through the garage area looking for people shots and I saw John and Aldo Andretti talking with Larry Curry outside the Roth Racing garage. I wondered what that was about but knew John has been known for hopping in other people's cars to get them set up, and Lord knows Roth's team can probably use the help, even with Curry on board now. Then I saw a friend who told me he was working with John on sponsorship and he wouldn't say why he was talking with Curry, but I knew Jay Howard had struggled early in the week and appeared to be losing rather than gaining speed. So then Saturday morning, the announcement was made at the track that John would take Howard's seat for Indy only, and sure enough, he was on track in the 24 car in the morning practice session.

Friday also brought the scariest moment of the month so far, when Danica hit Chuck Buckman of Dale Coyne's team on pit road. I had just walked through the pits not 10 minutes before that happened and the crowd around Danica was just ridiculous. By the time I got to Turn 1 to shoot for awhile, photographers were listening to scanners and everyone was talking about what they had heard since there was no video at the time. And when there's downtime, photographers talk.

Anyway, there's nothing going on now until Wednesday and I won't be able to get back to the track until Thursday afternoon, so I've got time to regroup and finish editing the 2,000 or so images I've already shot. Thank God for digital! Here's a group from featuring those who locked themselves in to the top 11 during Pole Day. Until next time, be safe!