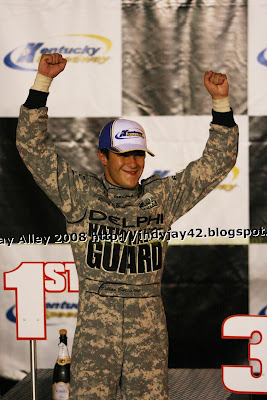 Dillon Battistini held off fierce challenges from James Davison and Arie Luyendyk Jr. to win the Kentucky Indy Lights 100 mile event tonight. Indy winner Battistini controlled the pace of the race from the front, leading every lap except the first one. Lots of drivers had trouble on a night when three and four wide pack racing was the rule rather than the exception. It looked like the race would end under yellow when a backmarker spun with less than two laps to go but he got out of harms way and the Indy Lights officials waved the white flag anyway. After the gift Davison got at Mid Ohio last month, he seemed pleased with a second place finish and was gesturing madly prior to the podium ceremonies about what looked like close calls and wheel banging during the event. These young guys sure can put on a show given the chance.

This is my last post for the evening before I hit the road for Indy. Thanks to Don Hamilton and American Motor Journal again for the opportunity. I'm loving every minute of it. It was a beautiful night for racing. Next year, they need to run the IRL race later so we get the added thrill of the bright lights. Maybe the new contract with Versus will get that changed. I'm sure the Lights guys enjoyed it. They probably felt like they were the feature, even though the stands were half full when they ran.

One last observation: for a race they said was sold out, there were a lot of fans dressed up as empty seats tonight. I wonder what that was all about.

The US Nationals are next up for me. Night qualifying. Awesome. Loud. Earth shaking. Flame throwing. My one night of the year for the straight line brigade. It should be fun! 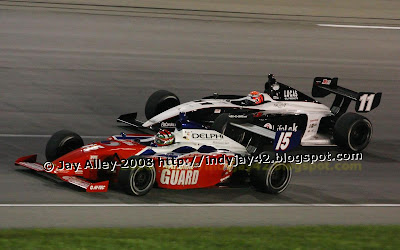 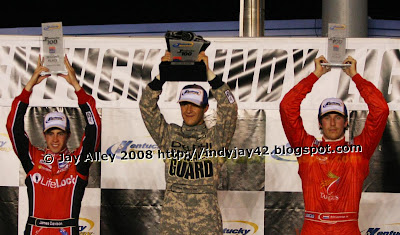