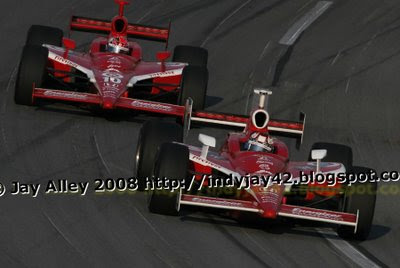 With the 2008 season in the home stretch of the final four points-paying races, it seems only fitting that the IRL would be heading to horse racing country this weekend. I am really looking forward to seeing this event since it could make or break the championship hopes of many drivers. Scott Dixon could put some real distance between himself and others if he runs well here like he did last year. Pretenders or contenders will be the question this weekend. I'm sure Wheldon will do whatever he can to aid team tactics if he isn't in a position to win outright.

I do expect Tony Kanaan to rise above the internal furor of the Andretti Green team and challenge for the win. 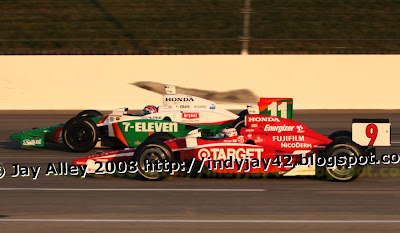 The Penske duo of Helio and Briscoe can't be counted out though. Helio has been extremely consistent but his winless streak continues so I'm sure he will be highly motivated to get back into the winner's circle. I wouldn't be disappointed to have the chance to shoot some fence climbing this weekend. This was not one of the better tracks for Penske last year as Hronish crashed out and Helio never really was on the pace, even though he and TK had a bit of a run-in as I recall. Those wacky Brazilians! 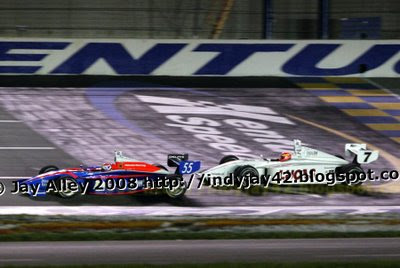 This could also be a surprise opportunity for Hideki Mutoh to sneak into victory lane since he won here last year in Indy Lights from pole position . He had a great duel with Alex Loyd and he could be pumped up to return to Kentucky Speedway. I don't think Danica's luck will change this weekend and it will be nice to see Sarah Fisher back on track again.

The IRL has announced its TV package for 2009 now so the only outstanding items are a season sponsor and the disposition of a race in Australia. The schedule is set up for the Surfer's event and although it seems odd that the IRL would settle for the Versus network for the majority of its races, having the 500 and three others tbd on ABC will still be a good deal for the league. With ESPN married to NASCAR, I'm not surprised the IRL had to look elsewhere, but if the speculation is true that the IRL is paying for the TV slots, then that would be disconcerting. Perhaps increased sanctioning fees and overall event attendance will make up for that. If Versus can give some more comprehensive coverage without the need to limit starting and ending times, that would be great. No more waiting for golf to be over and still miss the start, like at Mid Ohio this year.

August 09 looks like one of the best months of the schedule for me so I better get my room reservations made! At least Kentucky is close enough to go down and back the same day. I did it in May the night before the Indy 500 so this can't possibly be that bad!