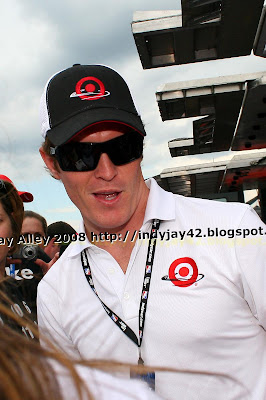 I just took my first walk through pit lane and the garage area. I like to walk the pits to see who's pitting where and there hasn't been much mystery this season. It's usually the Target team, Penske and AGR at pit out and today is no exception. Mutoh has the pit closest to pit out of any of the AGR drivers which could be an advantage for him.

Not many drivers out in the garage area yet but the bombs are going off now for the start of pre-race festivities. There's supposed to be an ATV jump in front of the driver intro stage on the front stretch which should be strange. Must be a Bombardier tie-in. I only saw Scott Dixon in the garage are by the team haulers but he was surrounded by autograph seekers. He looked confident and even a little cocky, judging by the look on his face at right. There was the usual crowd around the Danica hauler but she never comes out until the last minute and is always mobbed. I'll get her in driver intros. 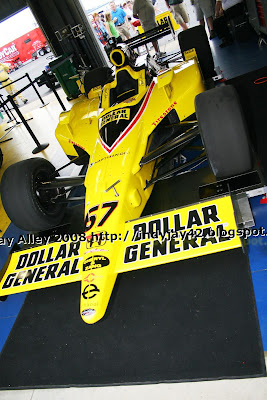 Sarah Fisher's car looks gorgeous, with Dollar General sponsorship and a bright yellow paint job. She's back in 16th starting position but after her unfortunate run-in with TK at Indy, I'm sure she's glad to be back on track. She's won pole here at Kentucky before and has run well in the past so it could be a good night for her.

I've got to go out and get ready for the festivities now and go to work so I'll be back later.
Posted by Jay Alley at 5:23 PM