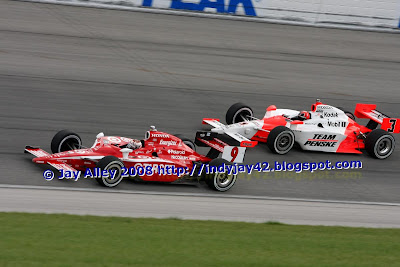 Not quite 48 hours after returning home to Indy from Chicagoland Speedway, I'm still amazed by what I saw Sunday as the Indy Racing League put on its best show of the season. With a unified series putting 28 cars on this fast track, Helio Castroneves ran the race of his life to win by a nose from last place after his qualifying run was disallowed. Scott Dixon and the Target team were up to the challenge however, taking the lead on the final fuel-only pit stop only to lose out for the race win on Helio's last lap high side pass at the finish line in the second closest finish in Indycar history. Chicagoland has a reputation for highly competitive races and close finishes and Sunday's race was one for the ages.

Frequent three wide racing, lap after lap, not just among the leaders, but back in the pack as well. Too much side by side racing to shoot it all, even with a 4 gig card in my 40D. Close calls on the track and in pit lane. Packs of cars screaming by in unison, one long Honda whine until the next pack came through. I thought last year's finish was spectacular when Dixon ran out of fuel on the last lap, but this year's event topped it by a bunch. Helio's charge was a thing of beauty. He was 12th by lap 12, blowing by people high or low. He was clearly on a mission and did everything he needed to do to give himself a chance to win the race and the season title. But for the blocking call at Detroit last weekend, he would have a three race winning streak, and his reaction in victory lane after being told he had in fact won the race was pure Helio. I've always enjoyed watching his pleasure in racing and pure joy in winning, and he never seems to get down no matter what is going on. True to form, the top teams fought it out right to the checkers so it was a perfect ending to a very interesting season. Now they can all go to Surfer's and let it hang out for bragging rights on the street course with nothing on the line but a win.

One of my best moments for the weekend came Sunday morning after the photo meeting when I went outside the media center to smoke. I saw Jack Arute walking up and I mentioned he had a great interview with Helio after the Detroit race - the "Save me Jackie" comment in particular. He responded that the joke was going around with the TV crew that they were going to get t-shirts printed up with "I Have Nothing Smart To Say" on them to sell on the circuit. I'd buy one, for sure. And that's one of the greatest things I've experienced the last couple of years since getting back out into the racing world with my camera. Seeing people only at the race track, some whose names I know and most I know only by facial recognition, always ready to talk or share a story of what they saw. Hanging out in the media center getting hydrated again after the race and listening to the driver and owner interviews. Having someone to talk with about the day on the drive home - that is especially true for me as the sounds of race cars buzz through my brain for hours afterwards. As with so many other things in my life the last few years, I've been blessed with a second chance to pursue something I love and there are few things that get me jazzed up like chasing race cars around the midwest, seeing the results on my cameras immediately, and posting them on the computer later. It doesn't get much better than this, and if I die tomorrow, then I know I've been taken care of.

I miss Michigan being off the schedule, but Chicagoland is fast becoming my favorite track in the series outside of Indianapolis. I'll have more from this race to post once the American Motor Journal edition comes out, plus I get to go to Salem to see the ARCA race this Saturday, and MotoGP at Indy Sunday, so if anyone's out there reading this, I hope you come back or leave me a comment. Meanwhile, congratulations to Scott Dixon and Target Chip Ganassi Racing for another fantastic season in the world's best open wheel series. Anyone who says the races on these 1.5 mile tracks are boring needs to get off their butt and go to the race track and see the action up close and personal. You might have a different view than the one from couch racing.

But then, I have nothing smart to say...