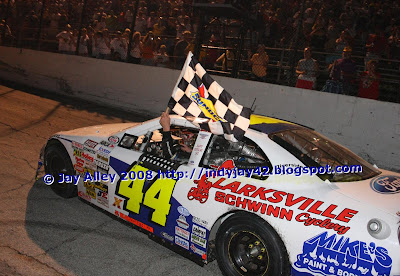 My 2009 racing "season" ended where it started exactly 5 months earlier: Salem Speedway in southern Indiana. Only this time, instead of cold and rainy conditions, it was hot and steamy. And the ARCA master, Frank Kimmel, drove like a bat out of hell to win for the 9th time at Salem. The car count was lower than for the spring race but the crowd was much larger and we were treated to a typical ARCA short track show:  close racin' among the top 10, some wreckin', and lots of paint being traded. I still can't figure out how Dexter Bean finished 3rd after causing the big red flag wreck of the night. Pit sequencing was a complete mystery as the teams only needed one fuel stop to go the distance, so fast guys like Scott Speed and Justin Allgaier ended up back in traffic as often as not. It bit Speed the most as he got dinged in Bean's smokescreen-induced pile-up on the backstretch but still managed a top 10 finish. Looks like he will be series champ as well as rookie of the year for ARCA this year.
So now I am left with the task of sorting through the several thousand images I shot this year for American Motor Journal to come up with 20 or so "best of" images for their year-end special edition that will come out in a couple of months. I'll do a couple of recaps here of my season on the road, display some more pix from all the tracks and series I shot this year, plus add a few pix of Mr. Photographer" at the track too just for giggles. You'll love the hats!
I thought Talladega was a possibility again this fall but I just can't swing it with work and other demands on my time being what they are, not the mention a long solo drive and the cost of gas. Even my Integra needs a rest every now and then.