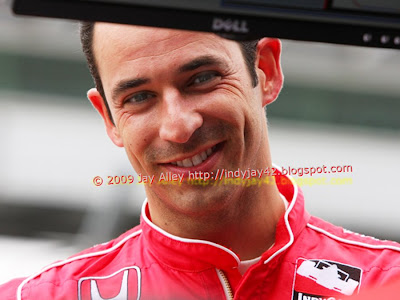 On a day that started blustery and overcast, the sun broke through the clouds like Helio's smile late in the afternoon on a frantic Pole Day at Indianapolis where the inter-team rivalries were allowed to play out and numerous drivers made mad dashes to nail down one of the day's 11 open spots in the Indy 500. It was really a spectacular show and I hope the Versus TV coverage did it justice, as once the scene of Nelson Phillipe's crash around 4:30 was cleaned up, the action was hot and heavy right up until the 6 o'clock gun as Justin Wilson took the track seconds before the track would officially close for the day only to fall just short of stealing the 11th position on the day. The biggest surprise of the day was Alex Lloyd who snuck into the last open spot for the day in the last hour as the track got a little temperature and the winds died down. Well done Sam Schmidt Motorsports!

It was crazy at times, as teams withdrew qualified cars to go for pole or improve their positions. The most disappointed was probably Scott Dixon who dropped like a rock in his last attempt and ended up worse off than before. His Target teammate Dario upstaged last year's Pole and 500 winner to uphold Ganassi honor on the outside of the front row. But Helio was not to be denied as suddenly around 3:30, he ran a 225.8 (faster than any other lap he'd run all week) and everyone knew we had a battle for the pole brewing. Unfortunately for Helio's teammate Ryan Briscoe, that push put Ryan squarely in Helio's crosshairs and there was no stopping Helio, although Ryan did come back and squeeze into P2 between Helio and Dario for the race.

Worst off for the day was Robert Doornbos who hit the wall again, this time spinning into the fence in Turn 2 after what was probably a heavy wind gust caught him out in the cold morning practice. Tony Kanaan probably worked the hardest, wheeling a frankenstein car comprised of pieces from Mutoh's backup and his own car, getting disqualified for being underweight and then coming back to qualify strong late in the afternoon. Marco and Danica ran well for AGR but they just didn't have the outright speed and it was clear that neither one was happy. And poor Mutoh may have been bumped a couple of times, but things were happening so fast, it was hard to keep up. Paul Tracy looked pretty good and made a nice return to Indy to qualify but also got bumped in the late frenzy.

Tomorrow they set the next 11 spots in the field so hopefully that will generate some excitement as well. I had a great day and shot nearly 700 pix on the day, so I had a blast and get the chance to do it all over again tomorrow. See you there!
Posted by Jay Alley at 9:41 PM