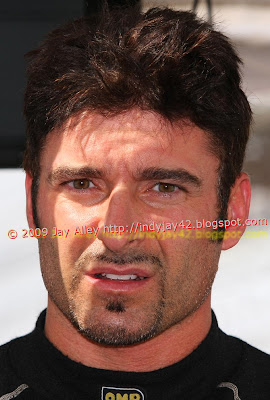 After the devastating disappointment of Bump Day for Alex Tagliani, the insurance plan involving Bruno Junqueira paid off for the primary driver of Conquest Racing and "Tags" is back in the show. He will start last in the 36 car that Bruno qualified easily and although Conquest may not have played the qualifying line strategy correctly, they got this part right, as they need Tags in the car to help their sponsors - especially the Edmonton Indycar race.
This photo was taken the day before Alex qualified and I could tell he was really struggling. I have other shots where he is gesturing madly about some kind of bouncing going on in the car, and I thought I heard him talking about the engine not pulling at top rpm's. So to say he was a happy camper Sunday night when the announcement was made for Bruno to give up the seat would be the understatement of the month of May. Just another example of how unpredictable competing at Indianapolis can be and I'm sure the Conquest team would handle Bump Day differently if they find themselves in the same situation again someday. When team owner Eric Bachelart ran the 500, the process was completely different and this time around it bit them, but their backup plan worked out just fine for Tags. I hope Bruno was well compensated for his stellar work in a minimum number of laps. His comments afterward were truly professional, although I'm sure he was disappointed too, as I saw him hanging around Dale Coyne most of the month only to be pre-empted by Tomas Scheckter the last Friday of practice. The fact that he was able to slot into the second Conquest car the next day, and then do an awesome job the next day in final qualifying speaks volumes for his talent. He belongs in an Indycar.
I've updated my Picasa page with shots of all 33 drivers and their cars in two different albums, and now that the American Motor Journal issue is out, I'll be adding still more photos leading up to the race. I've got some really nice shots of Conway's and Tags' crashes from last Sunday and I'll get those up soon enough. I'll have others ready for the American Motor Journal website as well so drop me a line if you see anything you like.