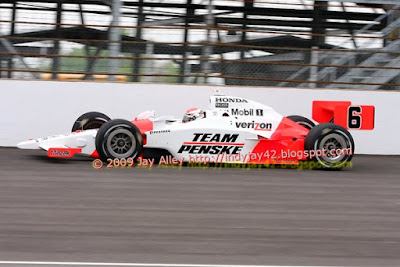 On a day when weather was again threatening, the Penske duo of Ryan Briscoe and Helio Castroneves led the timing and scoring in preparations for tomorrow's Pole Day competition. As I write this from the IMS media center at about 5:30 p.m., Happy Hour is winding down and it doesn't look to me like anyone will be able to challenge the 225+ mph hot laps these guys laid down earlier this afternoon.
A brief sprinkle around 4 stopped the on track action for awhile but the weather pattern that look so ominous on the radar skirted to the south of the track, so we had another day of "Tony Hulman" weather today and the teams needed it since Wednesday was washed out. Pole Day is shaping up as a Penske-Ganassi battle as Dario and Dixon were both in the high 224's today.
I spent most of the day in Turn 1 today and had a busy afternoon as AJ Foyt IV pancaked the wall around 1, then not much later, yesterday's fastest rookie Robert Doornbos bounced of the wall and ended up slamming the wall at the entrance to Turn 2. Then Scott Sharp took a wild ride spinning past me in the south short chute (I thought he had it saved a couple of times) before hitting over in 2 beyond my view. I got pix of all three and thankfully all the drivers are OK, but Sharp's Indy 500 could be in jeopardy as he mangled the car pretty good and has ALMS commitments for Acura that could create a qualifying conflict for him if he can't get in the top 22 here this weekend. Foyt was back on track a couple of hours later and Doornbos will be back, but probably in a backup car, so it was a day to be on my toes and paying attention. Good thing I've been hanging around here awhile!
For more, got to the American Motor Journal website later this weekend. Bye 4 now!
Posted by Jay Alley at 5:34 PM