If It's May, This Must Be Indianapolis 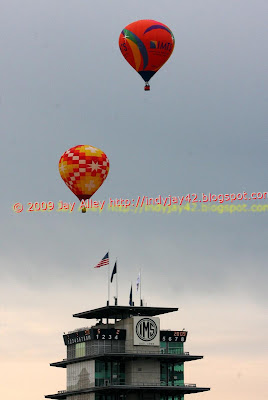 Now that May has finally arrived, we know what that means: the Indy 500. The practice schedule is reduced this year for economic reasons so the cars don't take the track until Tuesday for the Rookie Orientation Program and veterans taking refreshers. In honor of the 100 year anniversary since the track first opened with balloon races in 1909, the Speedway held a Founders Race yesterday that lifted off about the same time as the 500 Festival Mini Marathon. I got out to the track in time to see the flyers make preparations and despite the cool and overcast conditions, the light breeze was perfect for the racers to drift gently over the Pagoda and then on past downtown over the Mini Marathon course. It was neat seeing the balloons and I spent the early morning at the Speedway watching the runners stream through. 35,000 people on foot taking a lap of the Brickyard was pretty amazing, especially the fire department and SWAT team guys doing the race in full gear. Thankfully the weather cooperated or they would have been cooking in those suits!
With the "pre-season" now over, the clear favorite in my view has to be Target Chip Ganassi. Scottie D wont he only oval race so far this year at Kansas last week and Dario has a win on a street course. They will be tough to beat, especially since they are in essence both defending Indy 500 winners - Dixon for 2008 and Dario for 2007 as he was running taxicabs last year and missed Indy. With Tony Kanann leading the season points on consistent finishes, he will lead the AGR bunch to try and get his first win at the Speedway. And don't count out the Penske brigade now that Helio is back to join the only other race winner this season, Ryan Briscoe, and his "replacement" during the tax debacle, Will Power.
My prediction for the first 11 spots on Pole Day is the drivers from these teams will likely be the show: Target Ganassi, Penske, Andretti Green, and either Panther or Newman Haas Lanigan, especially since young Rahal has looked so quick already this year regardless of the type of circuit. It should be a busy three days of practice beginning Wednesday, although the weather forecast is not promising. But then what's Indy in May without a little rain? I hope to get out for Happy Hour Wednesday, and all afternoon Thursday and Friday. My plan is to blog each day and add pix to my picasa page so keep coming back!
Posted by Jay Alley at 7:13 PM