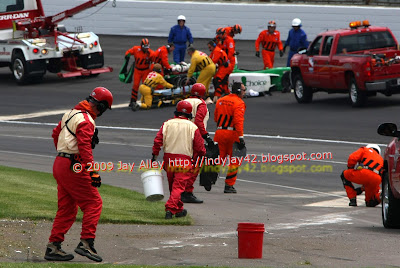 Final practice for Sunday's Indy 500 went off like clockwork for the IRL teams, but the Indy Lights Firestone Freedom 100 race was another story entirely. Two early crashes brought out yellows, including Anna Beatriz vicious smack of the inside guardrail between Turns 1 and 2 that had debris strewn all through the short chute and left her being wheeled off on a gurney (shown). Sam Schmidt Motorsports driver, pole winner and new Indy Lights track record holder Wade Cunningham took the win after a spirited battle among the top 5 where the lead changed hands multiple times over the last half of the 100 mile event. Most impressive was rookie Mario Romancini who charged from 18th to 3rd, valiantly trying high side passes on numerous occasions and battling wheel to wheel with everyone in his path. J. R. Hildebrand looked to have race winning speed until the end although he couldn't keep Cunningham behind him after a final restart with less than 10 laps to go. Cunningham became the first two-time winner of the event in the process.

In the final Indycar practice session for the 500, The Penske boys showed the way with Helio topping the charts and erstwhile replacement Will Power second. Mario Moraes continued to impress with third quick time while camo-boy Dan Wheldon slotted into 4th ahead of Ryan Briscoe. The Target Ganassi twosome were next with Dario edging out Dixon. The top 16 all ran race pace laps above 220 and the quickest Andretti green driver was Tony Kanaan in 11th, which doesn't bode well for Sunday. The scariest driver on the track today was rookie Nelson Philippe who learned quickly that qualifying all by yourself at Indy is a helluva lot differenet than running in the draft with cars all around. Sunday should be very interesting and I will be back soon with my race day predictions and more pix from today's Carb Day activities.

Turn 1 was again the place to be and I am really looking forward to Sunday. In roughly 72 hours someone will have milked poured over their head and we will all be looking ahead to the next 500. Or in my case, Texas!
Posted by Jay Alley at 4:20 PM