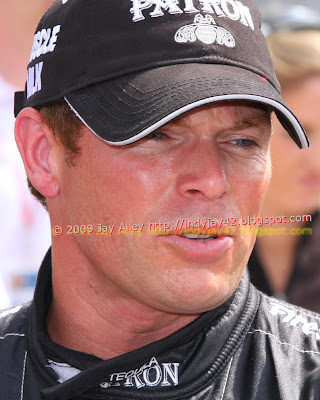 The luckiest guy in Indianapolis today is Scott Sharp, who sweated out another crazy day of qualifying to beat the 6:00 o'clock gun and bump his way back into the 500 field on his third and final attempt on the day. The unlucky guys today were Mike Conway and Alex Tagliani, who crashed in the first few minutes after the track opened for morning practice at 10:15. John Andretti also found the wall late in the day and some might argue that Graham Rahal was the luckiest today, as he had to lock 'em down and spin to avoid collecting Andretti's wadded up car as it careened off the wall through the south short chute. With two crashes on the weekend for the team courtesy of his teammate Doornbos, Rahal saved his impressive 4th place starting position and avoided a week's worth of repairs for the team. Next weekend the field gets filled and it is likely to be another exciting pair of qualifying days like this weekend.

This weekend will be hard to top though as today's weather was as different as could be compared to yesterday. Bright blue skies and sunshine greeted the teams this morning and my guess is that Conway and Tags weren't ready for the changed conditions, with the wind blowing from a completely different direction and the track temperature up at least 20 degrees from Saturday. The crowd sure seemed to enjoy the 11-11-11 bumping format as many stayed until the very end in the pit terrace stands on the front stretch.

I had a great photo weekend and shot four crashes/spins in three days, plus got headshots of every driver out there so far. The best has already been sent in to American Motor Journal and I will be posting shots of the qualified drivers and cars on their website in the next day or so. The last few days seemed to have gone by awfully quickly so I'm looking forward to next weekend and then the real countdown can begin: the 500 is now 14 days away and this time next Sunday the field will be full and we will be down to seven days.

Buy a ticket and come to Indy folks. You won't regret it.
Posted by Jay Alley at 7:59 PM