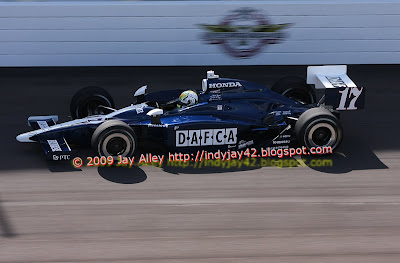 The second (and abbreviated) week of Indy 500 practice opened today under blue skies with new teams and drivers hitting the track for the first time. Oriol Servia debuted for the Rahal Letterman team in their first time on any Indycar track this season and they were up to speed very quickly. Davey Hamilton was out in two cars today - his own and teammate Mike Conway's since he still hasn't been cleared to drive yet after sustaining a concussion and bruised lungs in his wicked practice crash this past Sunday morning. Buddy Lazier and the venerable Hemelgarn team were also out in the familiar purple 91 car. I couldn't get out today until late in the afternoon but the track was very busy with lots of the qualified teams running race setups in traffic to get ready for the 500.
Weather could again be a factor this weekend as the forecast is iffy until Bump Day on Sunday so it should be a very interesting weekend. Hunter Reay continues to struggle to find speed in the third Vision car and Milka is one of the slowest of the who have attempted to qualify so far. Nelson Philippe was back out today after his first week accident as was Robert Doornbos (who everyone is calling Doorknobs) who pounded the south end walls twice last week.
The upcoming issue of American Motor Journal will have more of my pix from the runup to qualifying but for now here's a sampling of driver shots I've gathered so far. I hope to get out again tomorrow afternoon for awhile as there are a few other drivers I need photos of. It looks like there may only be 2 or 3 serious candidates for bumping this weekend, and my guess is that Milka will be one of those who has to watch the race on ABC instead of participating. See you soon.
Posted by Jay Alley at 10:07 PM