Indy 500 Winner Prediction - Out on a Limb or Completely Nuts? 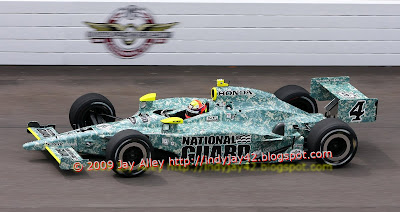 We went to the 500 Festival Parade today and I broke out my National Guard cap for the 4 car of Danny Wheldon. That's my darkhorse favorite to win the 500 tomorrow, not just because he was 4th quick in Carb Day yesterday, but because the Panther Team has been around awhile and could never quite get to P1 at Indy, even when Sam Hornish, Jr. was winning lots of races and championships. It would be awesome to see someone else besides Penske and Target or AGR at the top of the standings for once, and it is clear to me that they have something good going with Panther this season. Wheldon knows how to win this race, I am sure he's burning to beat Ganassi's tandem of Dario and Dixon, especially after the way Chip handled Danny's departure in 2008.
Besides that, at the Parade today, as Danny went by in the pace car, I got his attention and held up and pointed to the Panther National Guard hat I had and hollered "you're the man!" We made eye contact and with those new pearly whites he got recently, you could see he was enjoying someone rooting for him. I also said they needed to get the camouflage hats out! I want one of those!
And while Helio has won everything in site this month at the Speedway - pole position, fastest carb day lap and the pit stop competition, not to mention all his other tax issues have now been resolved - he's almost too much of a favorite. Will Power has more to lose than Helio and even Briscoe has a score to settle at Indy after last year's pit lane run-in with Danica.
I know someone who is going to Vegas this weekend and I asked them to put $20 on Wheldon for me, so there you have it folks. We'll see how prescient I am tomorrow at about this time.
Probably about like usual - not very...but who cares anyway. It's just one Hoosier's opinion.
Posted by Jay Alley at 6:03 PM

I have been looking for a camo national guard cap with Wheldon/Panther racing on it. Let me know if you ever find them at wtoddbarron@gmail.com.
Thanks

I have been searching for a camo national guard racing cap with Wheldon/Pnather racing on it. If you come across one let me know at wtoddbarron@gmail.com.