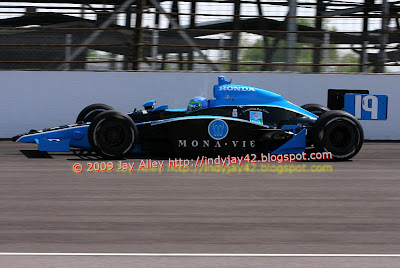 Tomas Scheckter made an impressive debut with Dale Coyne's "little team that could" with a minimum of laps and helped fill the field today at Indy. After rain delayed practice, EJ Viso sat ready to qualify and rains came again, but Tony Hulman weather prevailed at Indianapolis once again as the skies cleared with plenty of time for Day 3 to be completed. Bob Doorknobs led the qualifiers today and completed a sound comeback from two wallbangers during the first week of practice. Lots of people had trouble with the wind today as the conditions changed multiple times throughout the day.

And there was even a bump, as Buddy Lazier took a run a hair over 216 and is now on the outside looking in. Bruno Junqueira got the second Conquest Racing car today but the team wasn't ready to run him - they had to make sure that Tagliani got in, which he did in impressive style. Milka Duno is the other driver on the outside so who knows what else might happen overnight tonight? It wouldn't be the first time someone came out of nowhere on Bump Day to make the 500. Remember AJ's call to Giaffone at the mall a few years ago? It could happen tomorrow as Alex Barron is hanging around the garage area and I've seen Jacques Lazier around too. Plus Marty Roth has two cars sitting in his garage just looking for a buyer.

After the weather broke, there was a flurry of activity as eight drivers qualified in rapid succession. That left plenty of time for the Penske and Ganassi teams to run in formation in race trim before the final qualifying efforts started around 5:40 p.m. Stanton Barrett got out just before the 6:00 p.m. closing and almost knocked Nelson Phillipe out in an impressively smooth run; a slow final lap did him in.

Now everyone left has three more attempts tomorrow and the weather is supposed to be very nice so there should be a lot of track activity with Carb Day next Friday the only other opportunity for teams to prep for the race. But for the remaining drivers, getting in the race will be their sole focus tomorrow. Buddy Lazier is going for his 17th Indy 500 start and he has been known to pull a rabbit out of the hat more than once to get in the show. It should be fun!
Posted by Jay Alley at 7:10 PM