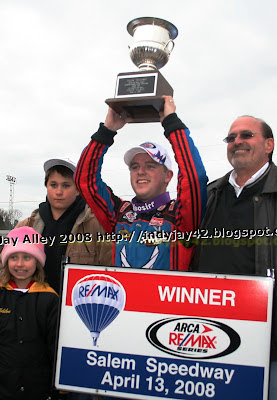 After a rain delay of over two hours, youngster Justin Allgaier held off Sprint Cup vet Ken Schrader in a green-white-checker finish at Salem Speedway yesterday to take back to back wins at the historic half mile. Frigid conditions kept the crowd down but they missed one heckuva show, both by the ARCA participants and the track crew who did yeoman's work getting the banking ready for racing. 30 minutes before the race finally started around 4:15 Salem time, rain sprinkles still hovered in the air. It was almost as cold as the Indy 500 in 1992, and that race was dubbed the "Ice Race" by many who were there.

I'm really coming to like the fast Salem track, although this event was by far the coldest I have experienced in "God's Country" in southern Indiana. But what do you expect from Indiana weather in the spring? Wait five minutes and it will change is the old Hoosier adage, but that wasn't the case this day, as the clouds remained gray and low all day, and you could see your breath.

Schrader sat on the pole and erstwhile F1 pilot Scott Speed was extremely racy and a quick study in his short track, high banked debut, leading several laps after snagging the lead on a restart like any veteran would have. But Justin was fastest when it mattered, making his only pit stop at the right time and saved just enough tires to keep Schrader at bay. Frank Kimmel was involved in a number of skirmishes but still managed to finish 4th, following his replacement in the 46 car, Matt Carter.

Ironically, we walked under the grandstands shortly after we arrived around 11 in the morning to see what condition the track was in, and out walked Justin himself. I asked him what had been said during the driver's meeting and he said "We have lights and they're going to get the race in one way or another today." So we knew right then we'd have a long day, but it worked out great in the end - for us and for Justin. I was especially happy after getting washed out at Eldora last weekend that I could actually shoot some pictures! So my racing season is underway at last and my work for American Motor Journal has already been shipped off for the next edition. The following link has several pix from the event and gives you some idea of how cold it was during the driver autograph session. Scott Speed is at right and Ken Butler III is next to him with bundled up fans in the background:

By now, all the IRL team gear is in Japan and Champ Car prepares for its last race ever - at Long Beach, where IRL points will be awarded. So it's strange to see this combination in play with only 20 days now until practice opens for the Indy 500. So the fields will be split between two series for the last time, even though racers at both events will earn IRL points. While all of that is going on, I will be drying out and warming up from Salem and heading over to Winchester Speedway for a USAC sprints & CRA Super Series doubleheader this Sunday.


The irony of the IRL's roots was not lost on me this weekend as I read the Salem Speedway program where greats like Mario Andretti, AJ Foyt, Parnelli Jones, Roger McCluskey and others have their names etched in the track's Victory Lane records. This weekend Mario and AJ will be in Japan with their IRL racing sons while the USAC guys run the Rich Vogler Classic 30 at Winchester. As Salem is where Rapid Rich lost his life in a USAC race, it hit me that the sprint cars will be running on another historic track in Indiana, albeit only a half-mile in length, as the Indycars race on an oval half a world away to prep for the big track in Indianapolis less than three weeks from now. How did we get here from there?

It doesn't really matter anymore, but running in Vogler's honor is a fitting tribute for every Hoosier kid who dreamed of racing at Indy. We all know the difficulties those kids face today and many of the best in NASCAR have followed in Vogler's footsteps with a big left turn to the taxicab circuit somewhere along the way: Stewart, Newman & Gordon being the most notable of that group. So who's to say someone running this weekend in Winchester won't end up in Victory Lane at Indy? Some would argue that it is sad that it will probably be in the Brickyard 400 and not the Indy 500, but I couldn't care less. I'm a fan first, a photographer second, and a Hoosier above all. So I look forward to being able to say "I saw them when..." as I bore my grandkids to death someday with tales of what the good old days used to be like.

These are the good old days. I'm glad to be a part of keeping track of the action on the track. See you soon.
Posted by Jay Alley at 8:12 PM