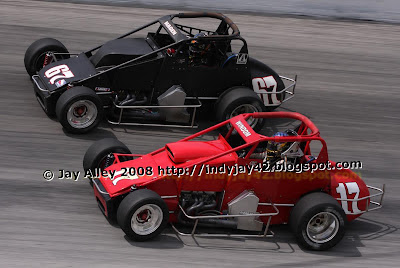 At last the clouds parted in Indiana and a beautiful day for racing (and photography) was available. After a week's delay, Winchester Speedway opened its 2008 season with an excellent crowd and an entertaining doubleheader featuring the USAC National Sprint tour in the Rich Vogler Classic and the CRA late model stock cars. Darren Hagen took the USAC feature after surviving a wheel banging incident late in the race with Chris Windom while Scott Hantz took the CRA 100-lapper which was red flagged early after a multi-car crash that took out several competitors, including 13-year old Logan Ruffin who was making his Winchester debut.

Is it just me, or are these guys getting younger all the time? Thirteen years old in a stock car on the World's Fastest Half Mile? Maybe I'm just getting old.
Anyway, the more I get back to the short tracks, the more I realize how much I love these places. Lincoln Park. Salem. Winchester. Hopefully Eldora - soon. These are the places fans flock to in order to be close to the action, places where you can see the whole track, buy a pit pass and listen in on the crews and drivers at close range, see the local guys make good and have a chance to move on. This is where it starts for everyone with a dream to go to Indy or Daytona. Of course the route to Indy has changed dramatically over the years, but the roots are still there. I heard on the PA that Eddie Sachs won the first sprint car race at Winchester in 1956 so you know you're somewhere special when that kind of announcement is made.
I'm off the short track circuit for awhile and heading for the big track this weekend - right here in my hometown. Check back as I post frequently as the buildup for the 500 gets underway in earnest. At last. Meanwhile enjoy the following pix from Winchester for the time being.