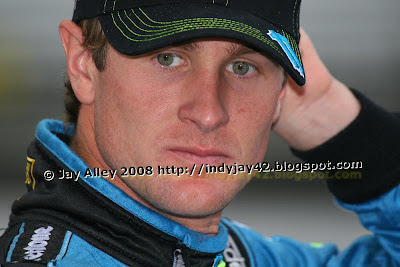 With Scott Dixon's inexplicable mistake and spin under yellow that also took out Ryan Briscoe at Watkins Glen this past Sunday, the "other " Ryan in the IndyCar Series stormed past Darren Manning on the ensuing restart to win his first IRL race. No stranger to victory lane from his stint in Champ Cars, Hunter Reay got the Rahal Letterman team back into Victory Lane for the first time in almost four years. Now the series heads to Nashville, the only concrete track on the circuit, where the groove is narrow and starting position is critical. And I get to hit the road again to see it all. It seems like forever since I've seen Indycars in person and May is a distant memory. The season is on the downhill side of the schedule now and the competition should really start heating up from here on out.
So far this season, the IRL has produced four first-time winners: Graham Rahal, Danica, Briscoe and now Hunter Reay. Will Mutoh or one of the transition drivers like Servia or Power be next? I can't wait to see what happens, and each race now takes on even more meaning for the season championship. Let us not forget that Dixon lost the series title last year on the last corner or the last lap of the last race of the season, so DNF's or poor finishes can be a source of continuing off-season lament for the guys leading the standings.
This will be my third trip to Nashville and it is a great track to shoot. The cars bottom out and send up showers of sparks in Turn 1 on full fuel loads. This year I have a travel and shooting partner as well so that will make it even more fun. I love to drive and don't mind long road trips by myself, but sharing what was witnessed at the track with someone always makes an event more memorable.
And this season has been nothing if not memorable, especially in hindsight now that we're halfway through the schedule. Richmond was a crashfest and Milwaukee was an airshow. The Glen saw lots of contact, much of it under yellow, and I think it is indicative of a higher level of competitiveness from the front of the grid to the back. The transition teams are also coming into a part of the schedule where driving skill should equalize the advantage the more experienced IRL teams have with equipment. Next week is Mid Ohio, and I'll go back there for that weekend. Other road and street courses follow with Edmonton at the end of July. I will be at Kentucky in August and Chicagoland for the points finale in September, and much can happen between now and then.
My hope for this weekend is for dry weather. I seem to be a rain magnet and last year at Nashville, I left my sunroof open as I didn't expect rain and the inside of my car got drenched. I didn't have a hotel room either so the whole weekend was a scramble to stick it out for the delayed race the next day which turned out to be beautiful. The rains can come back next weekend at Mid Ohio which features the ALMS cars on Saturday and Indycars on Sunday. Then the weekend after that comes the Brickyard back here in Indy. An excellent string of weekends for this fanatic photog. See you at the race track! 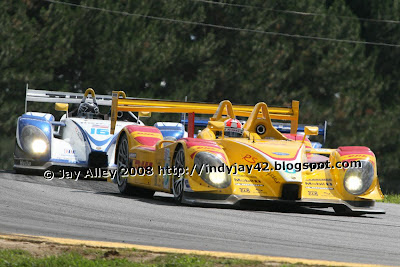