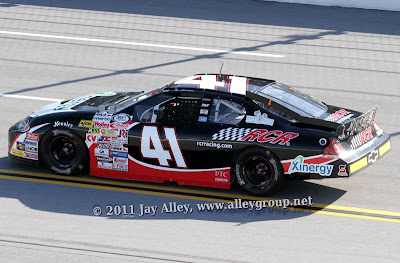 After a generally miserable stormy Friday afternoon and evening at Talladega Superspeedway, Saturday morning dawned bright, crisp and clear, almost like a fall day rather than spring. The ARCA Series hit the track at 8 a.m. for a 250 mile event and Richard Childress's grandson Ty Dillon took the win with a fantastic pass on the last lap coming off of Turn 4. Frank Kimmel placed second after leading quite a few laps in the second half of the race.
My vantage point was a photo tower at the beginning of the backstretch which is where I will be for this afternoon's Nationwide Series race as well. Qualifying for tomorrow's Sprint Cup race is winding down now and Jeff Gordon is hanging on to pole position as I write this. I got pictures of Jeff and Mark Martin after they qualified which I will post later when I get more time. They were both on the front row for awhile but in any event, it looks like Hendrick cars will lead the way tomorrow.
I have to get ready to shoot the Nationwide race now so until later, here is a quick initial slide show from this morning's ARCA event.
Posted by Jay Alley at 1:13 PM