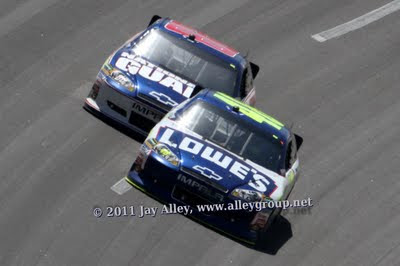 My Talladega road trip was quite an adventure! Not only was the racing spectacular with photo finishes and the typical "big one" crashes, the opportunity to shoot for Associated Press was incredibly rewarding even though I did not end up in a position to provide photos they would send out. I loved how the AP guys would talk about "making a picture" and when the race was over, everyone gathered in the "darkroom" building to watch the slide show put together from race photos. Of course there were the obligatory "oohs" and "aaahs" in a slightly mocking tone but it was all in good fun. Naturally I caught grief from a whole new batch of Nikon users for being a Canon guy! But I am no longer a Talladega rookie and was told I would be welcomed back, which is all I could ask for coming in as a newcomer on someone else's recommendation.

The adventure began Friday with the drive south from Indy on I-65, which I had characterized as driving to Birmingham, Alabama and turning left to get to the speedway. Driving through unfamiliar hilly terrain in blinding rain between Nashville, Tennessee and Birmingham was just the beginning of extreme weather I would encounter. After getting to the track eight and a half hours later and checking in, the rain began to fall after I had been there only an hour and a half. That evening, the tornado sirens and taped warnings to "Take Appropriate Action" began blaring from a pole seemingly right next to our campsite in a field just outside the track. I watched the weather radar on my Blackberry and then people started calling from Indy who had seen news reports about the weather in Talladega. I got the heck out of dodge for awhile and went to Oxford, Alabama and grabbed dinner until the storm blew through. Rains continued until about 1:00 in the morning and I spent an uncomfortable night sleeping in my car and trying to help a struggling friend that night.

Saturday dawned windy and very chilly with an early wake up and a 250 mile ARCA race before most people in their motorhomes nearby had even had their first cup of coffee. A few hours later the Nationwide series ran 300+ miles and jackets were the order of the day. The platform inside Turn 2 I had shot from all day was not going to be available for Sunday's Sprint Cup race according to the FOX television crew guys who were setting up. So then I was wondering where AP would put me for Sunday.

After Sunday's early photo meeting, I found out I would be at the top of the backstretch grandstands with a big lens. The view from up there was spectacular to say the least and the weather was perfect - the kind of day where you rarely need to change camera settings as the lighting was so consistent. Talladega looked like a pumped up short track from that vantage point as I could see virtually the whole track. 500 more miles of racing ensued with the Sprint Cup cars and large packs of cars were available to shoot. A record setting race was run and I was glad to be a part of it this year. I can't wait to come back.A slideshow from the Sprint Cup race follows this post.

The drive home began a few hours after the race but I had decided to get to Nashville and stop for the night as I was feeling lumpy from sleeping in my car Friday and in a tent on cold wet ground Saturday night. That was a good call as the ride home today was much less adventurous than the drive down Friday. Stats for the weekend: roughly 1100 miles driven, over a 1,050 miles of stock car racing observed, nearly a case of Diet Coke consumed, 1300 images gathered, more tweets on Twitter than I care to admit, and several new friends made in the process. I've only been home for a couple of hours now but am already thinking ahead to my next road trip in a couple of weeks to Salem Speedway for the spring ARCA race. Hopefully that won't be nearly as adventurous! See you at the track!

The pictures are great. It's like you are seeing it for yourself. Very Clear!!..Nikon Cannon..who cares..I think it is the photographer that matters....