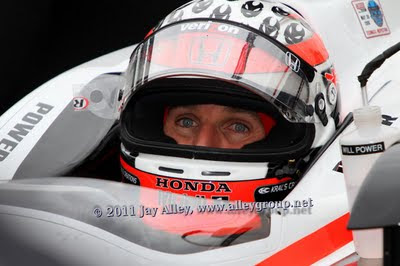 INDYCAR's Will Power is on a roll for Team Penske like few have ever experienced. With his dominant win this past weekend at Barber Motorsports Park in Alabama, Power is primed to return to Long Beach this weekend with designs on another clean sweep - pole position, leading the most laps and the race win. When you consider how far he has come in the last three years, Power's current streak is even more remarkable. While many drivers have to recover from injuries to resume their chosen profession, Power's comeback has been spectacular by any measure and the obstacles he has overcome would have been insurmountable for most people. But not for this unflappable Australian. Here's why I believe he deserves to be called the "Comeback King".

In 2008, Power came to the INDYCAR in the last second consolidation with ChampCar and faced learning new equipment, new oval tracks and new competitors with the KV team that had been solid and backed him to street circuit wins at Las Vegas and Toronto previously. Three years ago this month, Power won the last ever ChampCar race held at, where else, Long Beach. A year later with his Australian funding dried up, Power was essentially without a ride until Roger Penske hired him as a stand-in while Helio Castroneves dealt with tax and legal issues. Before he could even get comfortable as Penske's pinch hitter, Helio wins an acquittal and hops on a plane to Long Beach to qualify and race after months away. All Will did then was win the pole and make the ultimate sacrifice for the team, handing over the equipment he had set up to Helio. He raced an unfamiliar car that day and soldiered on as Penske's third driver with his future still very uncertain throughout most of the 2009 INDYCAR season.

Fate struck another cruel blow at Sonoma in late August 2009. Cresting a hill on the circuit, Power found Nelson Phillipe's crashed Dallara in his path and no way to avoid him, t-boned the helpless Phillipe in a violent incident which broke Power's back and dictated extensive sheet time for both himself and Phillipe. Roger Penske showed in 2010 why he is "The Captain" and arguably the greatest INDYCAR team owner ever. He held a ride for Power and with Verizon's help, Will took five road course wins and eight pole positions during a breakout season where he led the season standings for most of the year only to fall short in the last quarter of the title chase when oval track results could not match his road course record. I am sure it hurt losing the title in the final race of the season to Dario Franchitti after pancaking the wall at Homestead trying desperately to chase the points he needed to win the season crown. But considering where he had been just one year previously, I'll bet the pride of coming back so strong and coming so close to winning the IZOD INDYCAR title in 2010 salved most of any remaining wounds.

Now not quite 20 months since that horrific day at Sonoma, Power continues his road and street circuit roll in the first two events of 2011: winning the pole at St. Petersburg and chasing Dario to the checkered flag followed by his flag to flag win from pole at Barber. He has now started P1 in nine of the last ten road or street course events. He's also collected six wins and two second place finishes in the last 11 races of that kind spread over two seasons. So not only is he the Comeback King, he is fast becoming the road and street circuit king in the IZOD INDYCAR series so you know where you can expect to find him this weekend at Long Beach: likely P1 after Saturday's Quick Six final qualifying and on the top step of the podium come Sunday. Anyone who can do what he has done since 2008 in an INDYCAR deserves the highest praise and with Rick Mears coaching him on ovals, it is only a matter of time before he becomes a terror on those tracks as well. When he does, the rest of the field may be sucking ethanol fumes from Power's Honda at every track on the circuit.

I will be heading south to Talladega this weekend to shoot the ACRA, Nationwide and Sprint Cup series races rather than going west to Long Beach for a number of reasons. It's another chance to shoot for Associated Press and expand my contacts in motorsports photojournalism. I have never been there so it's another track checked off my bucket list. A year ago, my brother and I had talked about meeting at Long Beach but we just couldn't make it happen this season. Maybe next year. See you soon. Feedback is welcome! Follow me here and on Twitter @alleygroup this weekend as I post throughout my Talladega road trip!