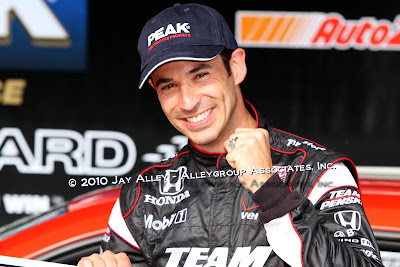 Penske teammates Helio Castroneves and Will Power staged a frenetic shootout for Pole Position at Indy today with Helio setting fast time as soon as the shootout started at 4:30. With two laps over 228 and a four lap average of just under that mark, Helio put up a huge number that no one else could match. Lots of attempts were made to prevent Helio from taking a second consecutive Indy pole, the first to do so since the late Scott Brayton, but no one could do it. Dario Franchitti made a late charge to sneak into the outside of Row 1 and prevent a Penske sweep of the top three positions and save face for Ganassi Racing. It was an amazing display of bravado by all the drivers who made it into the new Top 9 shoot out and incredibly no one went over the limit and found the wall while chasing Helio's unbeatable time. Tony Kanaan and Takuma Sato were not so lucky as they hit the wall earlier in the day and must try to qualify Sunday on Bump Day. Mario Moraes had a spin with wall contact but came back to make the show with a solid run. So now there are only 9 positions left in the field for the 500 and Bump Day should be another great show for the fans. It will be hot and greasy so I would expect there to be more car control issues for drivers dealing with conditions they have not seen all week. Stay tuned!