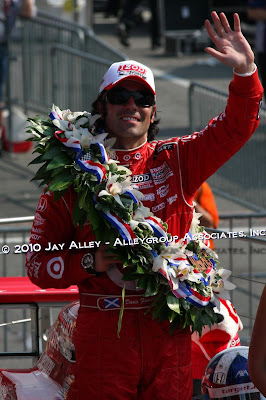 On what was reported to be the hottest race day ever for an Indianapolis 500, Dario Franchitti thoroughly dominated his IZOD Indycar Series competition today to win his second 500 in his last three tries. In the process he helped team owner Chip Ganassi become the first car owner ever to win Indy and the Daytona 500 in the same year. The race began and ended with crashes and Dario took the lead on the first lap and overcome the fuel mileage concerns of most of the field to win under caution following Mike Conway's frightening Turn 3 crash with Ryan Hunter-Reay on the last lap. Conway suffered a broken leg and it is a miracle that no one in the stands was hurt by the debris cloud thrown off when Conway got airborne and hit the fence above the SAFER barrier going backwards at 200 mph. My photos of the crash are included in the slideshow with this blog post and initial concerns were that he had actually gone under the grandstands after tearing through thick steel cables which split the car in two. Thankfully, the outcome was nowhere near as bad for Conway as it could have been.
The race was marked by several accidents likely due to the hot and slippery conditions, but Dario was unaffected by any of it. He clearly had the fastest car all race long and as others had to peel off for late fuel stops, he moved back into his dominating position at the point. The Dreyer & Reinbold team had been having a very good day prior to Conway's crash, as he led several laps along with Thomas Scheckter and Justin Wilson at various times. Oddly enough it was the veterans making the mistakes today and not rookies as one might have expected. Team Penske had the worst of it. Ryan Briscoe found the wall. Will Power left his pit with the fueling rig still attached. Race favorite Helio Castroneves stalled leaving the pits. Davey Hamilton, Bruno Junqeira, John Andretti and Raffa Matos all hit the wall. Dario's teammate Scott Dixon had a problem in the pits and was never a serious challenger for the race win. The only rookie who got into trouble was Sebastion Saavedra who spun in Turn 1 into the barrier (again) and put Bryan Herta's "Two Men and a Truck" race team out for good. Except for Sarah Fisher, who could never get a grip on the race track and dropped out early, the ladies fared well today. Simona de Silvestro ran strong all day (my rookie of the year favorite) and Ana Beatriz stayed out of trouble until becoming an innocent victim of Conway's wreck. Danica was racy while fighting in mid pack after being booed in driver introductions for her Pole Day comment that her poor qualifying run "Was not my fault." Indy 500 crowds don't forget.
Danica's teammates were the stars of the show for Andretti Autosport. Tony Kanaan picked up seven spots (flying around the outside line) in the first lap and charged all the way to second at one point to the delight of the sweltering crowd. Marco Andretti was a frontrunner all day and took third while Hunter-Reay had some good moments too before Conway used him for a launching ramp at the end. Indy-only teammates at Panther also had good days as my darkhorse candidate Dan Wheldon finished second for the second straight year and Ed Carpenter maintained a Top 10 spot most of the afternoon. Perhaps the happiest people other than Dario's bunch were Alex Lloyd and Sam Schmidt, as Alex was very aggressive on restarts and parlayed that into an excellent 4th place finish.
It was quite a day at the old Brickyard today, and my vantage point in Turn 3 offered loads of side by side action as cars slipped up into the gray on several occasions to be passed by others who were able to hug the white line. And my predicted winner, Dario Franchitti, made everyone else eat his ethanol exhaust virtually the entire race, leading more laps in one win than any other 500 winner in history. Now the big track in little Speedway, Indiana, goes quiet until NASCAR comes to town at the end of July and we have to wait another year to see what surprises she will unveil in 2011 which will be 100 years since the first 500 was run. Jack Nicholson waving the green flag and kissing the bricks, Mark Walberg in the two-seater with Michael Andretti at the wheel, more women racers than ever before, and a dominant race by Scotsman Dario Franchitti will be hard to top next year. And Helio will have to wait until then to try and collect his 4th Indy 500 win, while Dario will return as defending 500 Champ for the first time, having left for stock cars after his 2007 win in the rain. The IZOD Indycars now move to Texas for a night race this Saturday and I wish I could go again this year. Pretty soon, you'll hear the same old question from me: is it May yet? I can hardly wait.
Posted by Jay Alley at 10:12 PM

Wow! Incredible photo of the crash!