Indy 500 Field is Full: Bump Day Drama To The End 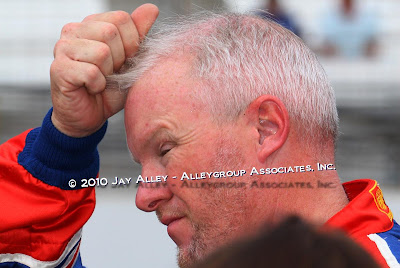 If Paul Tracy has too many more days like today at Indy, he won't have any hair left at all, as he's on the outside looking in after experiencing a miserable Bump Day at the Indianapolis Motor Speedway. Setting aside a time that would have been quick enough to make the show, PT was left in the qualifying line at 6:00 p.m. with Jay Howard on the track making one last ditch attempt to get a second Sarah Fisher Racing car in the show. Howard was unsuccessful and Sarah was in tears afterwards. Such is life at 225 mph at Indy. Easily the luckiest person at IMS today was 19-year old Sebastion Saavedra who made a rookie mistake with a little over an hour to go in qualifications and smacked the SAFER barrier in Turn 1 while seeking more speed in case he got bumped off the bubble. He ended up making the 500 with a wrecked car after all the bumping was done.
The day's final events set up early as the field was filled by 1 p.m. and the track opened for an extensive green light practice period where teams that qualified Saturday on Pole Day ran in bunches to work on race day setups. On a day when the weather was more like August than May, the track temperature soared from 84 at noon to 124 just a few hours later, and the changing conditions proved to be the undoing of several drivers who could no longer find speed. Even Tracy's bravado was no match for the track today and despite kicking up the marbles and almost brushing the wall on his last qualifying run, he could not get it done. Milka Duno is also on the outside looking in, as she never did seem to find the groove in Turn 3 where I shot today, and she had a major moment of her own on the south end of the track during one of her qualifying runs. After reportedly having "words" with Grandpa AJ earlier in the day, Foyt IV never hit the track as Jacques Lazier was put in the seat to try to qualify a second Foyt car after Vitor Meira got the 14 machine in handily shortly after noon. Jacques worked hard all day and with relatively few laps, he got sideways in front of us and had to wave off one final attempt to make the race. Bruno Junqueira put a second FAZZT team car in the show with virtually no track time and Mario Romancini gave up a precarious speed to run faster late in the day and safely get in the field of 33. Alex Lloyd made a workmanlike run to get in and Takuma Sato spent most of the day in the garage before making a late run to get in and come back from his Pole Day accident.
The happiest person at the Track had to be Tony Kanaan today after crashing again in the morning practice session in almost the same place as he did Saturday. Contrast TK's emotional interview with Sarah Fisher's tearful reactions after the 6:00 gun went off and the extremes of making the Indy 500 become personal for anyone who loves all that is Indy. It never ceases to amaze me how the practice and qualifying unfolds, where at the beginning of practice everyone thinks they have loads of time to "sort out" their cars and get up to speed. This year especially, weather was a major factor, reducing track time and pushinh small teams Like Sarah's to their limits only to come up short. Now the real waiting begins, as the 500 is just seven days away and the race we wait for all year will be over before you know it. I'll be back with other photo features this week as I have more time to edit the few thousand images I've shot this week, and then we go racing in earnest for a shot at making history.