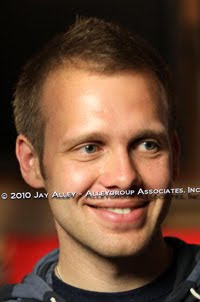 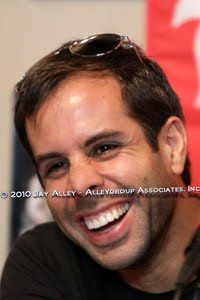 Every May around Indianapolis, you can always tell when the Speedway is about to open for Indy 500 practice. "500 Festival" hotshots are tooling around in their pace cars. Checkered flags start showing up in people's yards or hung from their homes. Drivers start making publicity appearances for their sponsors. The local news media ramps up their print and video coverage of preparations for the opening of the Track.

The teams are now all ensconced in Gasoline Alley and getting down to the business of preparing their cars to hit the track in a little more than 24 hours from now. Drivers are gearing up with media appearances at places like Macy's, which has a huge push on now for sales of IZOD Indycar Series merchandise. Driver "experts" will soon be in demand for the local television stations. Earlier this week, I attended a live broadcast of the Autosportradio.com show at McGilvery's Pub on the westside and heard Ed Carpenter, Vitor Meira and AJ Foyt IV talking about their preparations. They appeared relaxed and ready to go as the best time of year in Indy is about to get underway. The pub was packed for the show and the Hoosier 100 promoter was also there, so if you are in Indy for the 500 weekend, go out to the State Fairgrounds after Carb Day activities are over and watch the USAC Silver Crown cars run 100 miles on the mile dirt. If you still can't get enough racing that weekend, then go to O'Reilly Raceway Park the next night for the "Night Before the 500" USAC Midget show on the 5/8 mile paved oval. The Star Mazda series will also be featured that night. 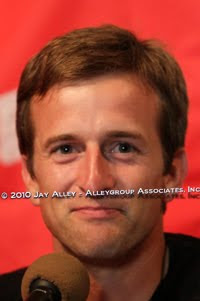 At the Autosportradio.com show, it was especially interesting to hear Vitor and AJ talk about being teammates this year. Vitor has made an incredible comeback from back injuries suffered in his crash with Rafael Matos during last year's 500, and he told a great story about discussions with team owner AJ Foyt about reassurances he got about the ride being available to him when he recovered. He also talked about the new Pole Day qualifying format and indicated he knew it was for the benefit of the fans. Foyt IV was very entertaining and said he would be happy to qualify 10th on Pole Day and didn't seem to want any part of the Fast Nine session that day. He was asked about his relationship with AJ and said it is much better now that he is not crashing AJ's cars. The best part of the interview was his comment that there have been times with these IRL cars when they weren't handling (like at Richmond) where he "just wanted to crash and get it over with". The crowd loved the comment and of course everyone understood that he wasn't really hoping to crash and that he was describing what it was like trying to maneuver an ill-handling race car when every corner the thing might swap ends on him.

The six rookies entered for this year's race will get the bulk of the track time this weekend after the veterans are given the first two hours Saturday and Sunday to shake things down. Takuma Sato, Simona De Silvestro, Ana Beatriz, Jay Howard, Bertrand Baguette, Mario Romancini and Sebastrian Saavedra each have good teams behind them and while they may be limited in big car, big track experience, none are newcomers. Sato has a wealth of Formula One experience (plus Honda money) and ran the USGP at Indy for Honda's F1 program on Indy's road course, although turning left exclusively will be new for him. De Silvestro was the last Formula Atlantic champion, won several races in that now-defunct series and has looked stout on the road courses so far this year in her maiden Indycar season. Ana was the first woman to win a Firestone Indy Lights race (at Nashville two years ago) and comes back to Indy this year hoping to forget her huge Turn 1 Indy Lights wreck that I photographed in the 2009 Freedom 100. Howard is teamed with Sarah Fisher and got laps at Indy last May but looked shaky in his initial foray at the Speedway so I hope he keeps his foot down and that Sarah's little team can give him a good car. Baguette is an unknown but Saavedra dominated a number of Indy Lights races in 2009 so he should do well with sufficient track time.

I'll be there tomorrow to bring it all home and I hope you'll come back for further updates as the run-up to Pole Day next Saturday continues. Go fast. Turn Left. Bring it back in one piece. That is what these rookies hope to do this weekend before the Track opens up for all entrants on Monday.