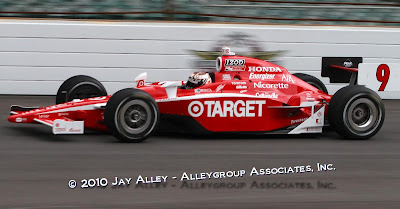 After a complete washout of practice Monday May 17th, the IZOD Indycar teams got back to business today with nearly a full day of practice in cold and overcast conditions. Most of the teams ran in coordinated groups doing fuel runs and practicing in the draft with teammates and others. Scott Dixon led the way today and the track was very busy until almost Happy Hour, when a few sprinkles created two brief caution periods. Mario Moraes and Marco Andretti jumped into the top 5 speed list today but the day ended ten minutes early after EJ Viso clouted the Turn One wall after spinning. I was in Turn 3 today hoping for favorable lighting conditions and am probably changing my race day game plan to shoot from there. Three is the last corner at Indy without tall fencing to shoot through and I have had good luck there in the past.
Even though the teams put lots of laps in today, it may prove to be rather meaningless come Pole Day, just three days from now. The weather forecast is typical for us Hoosiers, as the old saying goes, "if you don't like the weather, wait five minutes and it will change." And change dramatically as the weekend is predicted to be hot with temperatures in the 80's, quite a contrast to the damp and cool conditions which have prevailed since the track opened Saturday.
There have been no less than 36 drivers on the track in the limited practice so far this week and there are several others pounding the pavement hoping to get a shot at qualifying. I've seen Jacques Lazier, and today Oriol Servia was talking to Dario Franchitti and Alex Tagliani at different points during the day. The tough part about a shortened practice week is other drivers won't have time to put together late deals, unless someone gets desperate this Sunday when Bump Day rolls around. It wouldn't be the first time someone jumped in a car on the last qualifying day and stuck it in the show with hardly any laps. Greg Beck's entries have not hit the track as yet so his equipment might be available to someone with a big enough pocketbook.
Everyone seems to have no trouble getting up to 220 right away (even Milka!) so I would expect the bump speed to be around 221.7 by the time all the shouting stops this Sunday when the gun goes off at 6 p.m. It also looks like a pole speed of close to 227 might be possible, but it will need to be ideal conditions and a near-perfect four lap run to make that speed. Lots of folks are already running faster than last year's pole speed of 224+, but they are also running in packs with help from the draft. As the weather warms up by Friday and teams begin to roll out their qualifying setups, the real speeds will emerge as the pack practice will stop and drivers will be looking for open space on track to run by themselves.
The Speedway is really pumping up the "shootout" angle as they are playing an amped up electric guitar version of the theme song from the classic Clint Eastwood western, "The Good, The Bad and The Ugly" with regularity on the track's PA system and video boards. The good will take pole position Saturday evening, the bad will go home Sunday night, and the ugly will probably scare themselves (or worse: become acquainted with the SAFER barrier) just trying to make the field of 33. It doesn't get much better than this folks. C'mon out!